Blinded By The Boss 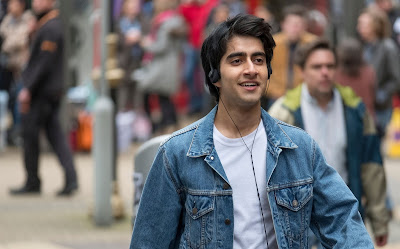 'Blinded By The Light' starring Viveik Kalra
I went to see ‘Blinded By The Light’ last night a British comedy drama film on current release directed by Gurinder Chada (Bend It Like Beckham), inspired by the life of journalist Sarfraz Manzoor and his love of the music of Bruce Springsteen. Manzoor co-wrote the script and it is based on Manzoor's memoir Greetings from Bury Park: Race, Religion and Rock N’ Roll. Set in the town of Luton in 1987 Thatcherite Britain, the film tells the coming of age of Javed, a British-Pakistani Muslim teenager who aspires to be a writer and obsessively writes poetry, whose life is changed after he discovers the music of Springsteen when he starts college at 16 and is introduced to his music by his Sikh friend, Roops. Viveik Kalra stars in the lead role and he and all the cast play it brilliantly. 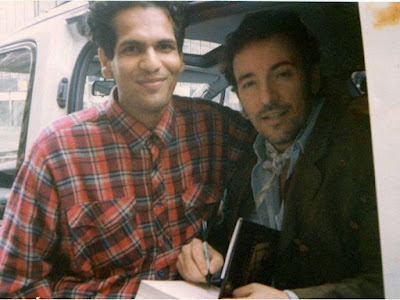 Sarfraz Manzoor with Bruce Springsteen
As a massive Springsteen fan myself, I approached the film with some trepidation, but I needn’t have worried and trusted in Manzoor’s own devotion to Springsteen (he has seen Bruce in concert a whopping 150 times!), as he would never allow it to not do The Boss and his music justice.  It was absolutely brilliant and I loved it from start to finish. 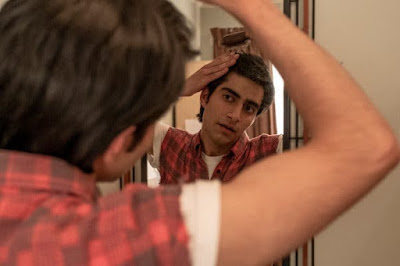 It was great hearing so many of Bruce’s key songs (largely from Darkness On The Edge of Town, Born To Run, The River and Greetings From Asbury Park) reframed in this different context of 1987 Luton, alongside all the other Eighties music that is peppered throughout the background story (most of which I hated then and still hate now!) from A-Ha, Level 42 and Cutting Crew, with funny references to Tiffany and Debbie Gibson (remember them?!). In fact, so much of the film was very funny, but it also managed to combine and walk a fine line between pure cheese (seeing our protagonist’s singing and dancing to ‘Born To Run’ running through the streets of Luton was brilliant and so uplifting), to more poignant and powerful scenes about Javed’s battles with his Dad and his own identity and desire to break out of his claustrophobic family life and small town existence (staple Springsteen themes),  and scenes depicting racist attacks by the National Front against the Muslim community. Sadly, and I’m sure not lost on the filmmakers, this all seemed to be very relevant now in Post-Brexit  Britain. There was one shot of Javed standing below a huge poster depicting Thatcher with the slogan ‘United Britain’ which seemed to have particular resonance in this very divided Britain we live on. 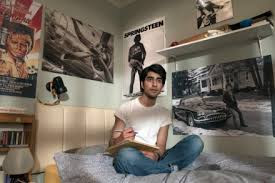 As mentioned, the film is set in 1987 which is the same year that I too was studying for my A levels and similarly obsessed with music (and not studying!), so I found many moving parallels with my own experience and own teenage search for my own identity, not in Springsteen however, that conversion came much later in my thirties, but in the music of bands such as Echo and the Bunnymen, The Smiths, The Velvets and The Pixies and lots, lots more besides. I also played bass guitar in bands at this time. 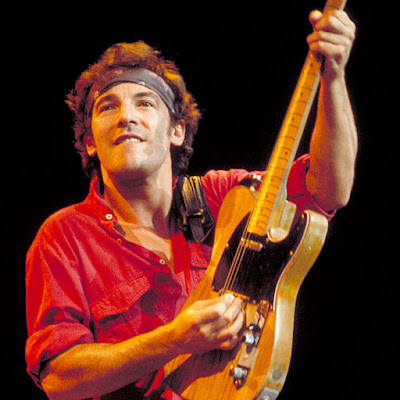 BROOOOCE
My own Bruce ‘cherry was popped’ ( a term coined by Roops in the film), when I was persuaded by my friend, Vin, also an Asian massive Bruce fan funnily enough, to accompany him to see Bruce and the E Street Band on ‘The Rising’ Tour at Manchester’s Old Trafford Cricket Ground. The experience truly changed my life. I had never, and I’m sure never will again, seen such a great performer as Bruce and the band. It took me months to come down from it as I accumulated all the albums and watched lots and lots of old VHS videos, borrowed from my friend Graham who I went with last night, and immersed myself in the world of BROOOOOOOCE…We both stepped out of the cinema last night uplifted by the film and once again reminded why Bruce Springsteen, the music and the man is so great and means so much to ‘tramps like us’…