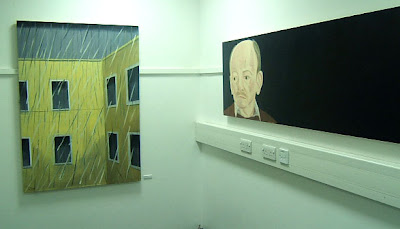 I’ve just installed a new exhibition of my paintings at the Bessant Gallery, at the School of Art and Design at Wolverhampton University. I’ve called the exhibition ‘Thirteen’ and it is a mixture of recent paintings with older ones. In the past with every exhibition I was keen to show completely new work, always moving on, but these days I like to view my work differently, as a sort of continuing evolving dialogue between paintings past and present and certain themes and ideas. I enjoy installing exhibitions like these where I select a number of paintings to take to the space and try and create something new in the installation that may surprise and help me and look at the work with fresh eyes.
This time I took along twenty paintings and installed thirteen. At first I was unsure what I had put together. The installation had a quiet, melancholy feel which took me a bit by surprise. But having come away from it I found this mood interesting and it did indeed surprise me and make me look at the work differently. There’s a cool colour palette that runs through the work that seemed to add to the atmosphere. Below are a few pictures of the show. 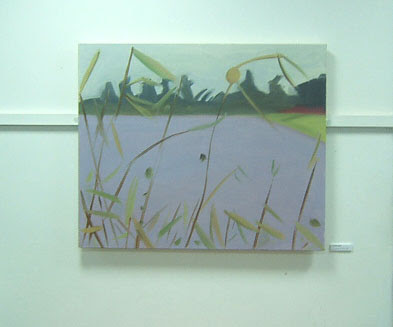 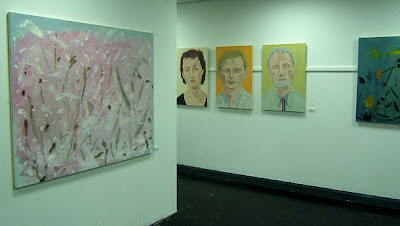 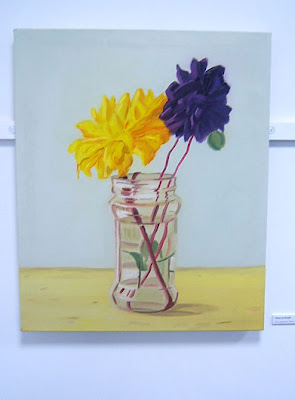 This is a new painting, 'Yellow and Purple'.

‘Thirteen’ runs until Friday October 23rd, and is on the ground floor of the School of Art and Design. If you want to go along and visit you can find the gallery if you just turn left at the reception.
Posted by shaun morris at 21:28 No comments: 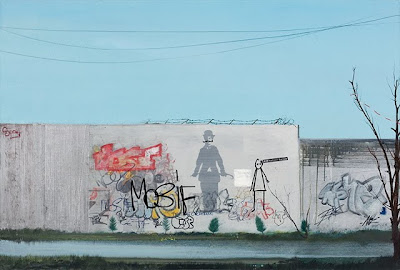 I’ve really enjoyed reading ‘Heartland’, the new novel by Anthony Cartwright recently. Set in Dudley, it follows the story of Rob an increasingly failing footballer who drops a league each season from Aston Villa down to his local Cinderheath FC. Its set against the backdrop of the 2002 World Cup, with 9/11 still fresh in people’s minds, and Cinderheath opposing the local mosque team. The BNP on the sidelines, and the Tipton Taliban are in the news.

Cartwright seems to effortlessly weave and explore these themes and find the human heart behind these complex issues of identity, race, and class across different generations, and finds the unlikely similarities we all share.

I really identified with so many of the characters and Black Country settings, and am keen for other members of my family to read it, particularly my Dad, who still works in a factory in nearby Langley, just outside Dudley.

We sometimes discuss the politics of the young men who work there which are borne out of Thatcherism and her dismantling of so many of the communities in the Black Country as all the heavy industry he used to work in closed in the Eighties and Nineties. At this time places like Dudley and West Bromwich (where I grew up),and Tipton, where he was raised ‘turned to rust’, as it is put in the novel.

They are areas which have seen a rise in BNP activity, as ‘political’ groups (I describe these in the very loosest of terms) like these often like to move in and exploit the fears and insecurities of vulnerable communities. I think a lot of our discussions circle around our feeling of dislocation from the current working class generation and the Thatcherite values that seem pretty embedded, compared to the working class community we grew up in. I think this is partly an inevitable generational thing, but society has changed so much in the last twenty years with a focus on the material and the interest of the individual over that of the many.

Returning to the novel, I was really impressed by the skill and craft in Cartwright’s writing. There were many different strands and stories within the novel, and he never seemed to miss a beat, maintaining utter focus on the heart of the overall story. I was also fascinated by how all the dialogue was spoken in a thick Black Country accent, which can be totally impenetrable to those from outside the region. I’ve always admired writers like James Kelman and Irvine Welsh and how the voices in their novels are authentic to their region of Scotland, exploring language and dialect in all its complexities, and I suspect Cartwright is no stranger to their work, particularly the subtleties of Kelman. Cartwright’s debut novel ‘The Afterglow’, was also great and had many echoes of Kelman’s writing for me. They both deal with the quiet and banal spaces in between events, the places where things really happen, brilliantly.

At the top is a painting by Jock MacFadyen, the rather brilliantly titled 'Kill Matthew Barney', that I think depicts a similar urban landscape to that ‘Heartlands’ is set in. I’m a big fan of his work.

Posted by shaun morris at 09:10 No comments: 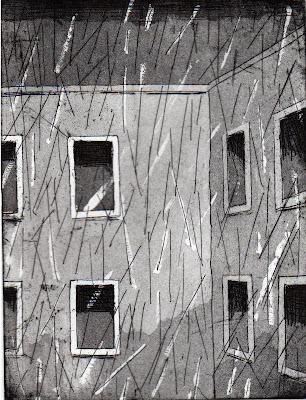 Amsterdam
This year I’ve been participating in the Artists Access to Art Colleges Scheme 2008. I’ve been working in the printmaking department at Wolverhampton University, trying to develop my etching skills. On Friday the 4th until the 14th I’ll be exhibiting my first collection of prints alongside the other artists on the Scheme at Wolverhampton as part of the University’s MA Graduation Show.
I’ve really enjoyed the experience, and have spent quite a bit of time over the summer trying to develop these prints. I moved away from the portraits in the end, to create a more diverse range of images that I actually felt worked more successfully than the portrait work . This was partly motivated by my application for funds to the Arts Council to create a limited edition book of prints based on my ‘Seek My Face’ portraits for the Sandwell Archives being rejected (oh well… only several months of endlessly refining my proposal, raising quite a lot of support in kind, and a 35 page application form later-all for just £5000!But that's the game...it's pointless complaining). So I changed track anyway, and I’m quite pleased with the results, but feel that I have so much to learn…but that's ok and right. 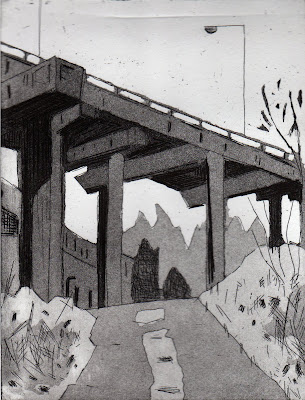 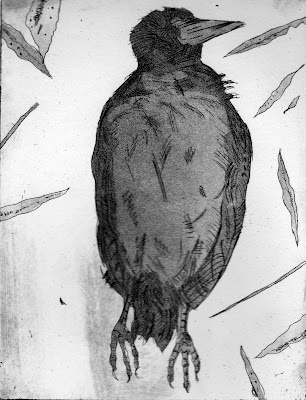 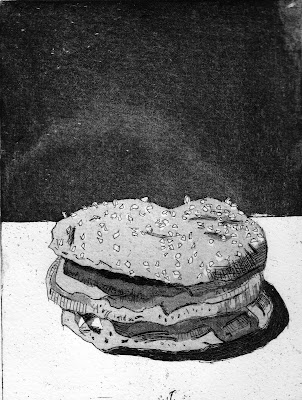 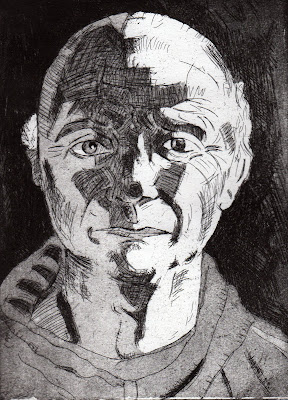 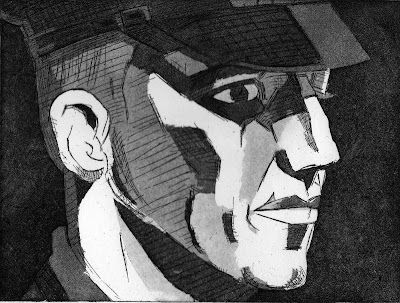 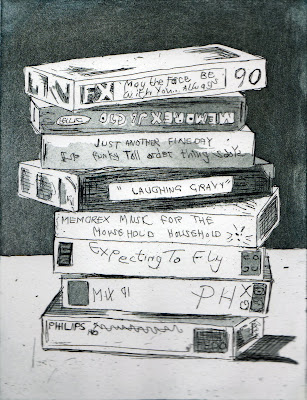 Tapes
I’m exhibiting six of the seven prints above. They are all etchings and aquatints, 16 x 12cms, and priced at £150 framed if anyone is interested in purchasing one. Just get in touch through the website. 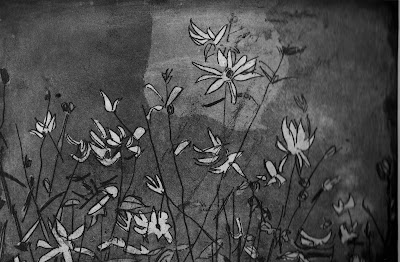 This last print above is a more experimental soft-ground etching. The soft-ground creates an etched line that is more akin to a pencil drawing. I then experimented with ‘painting’ on the aquatint tones. It was my first one, and I'd like to explore it further...
Posted by shaun morris at 21:02 No comments: