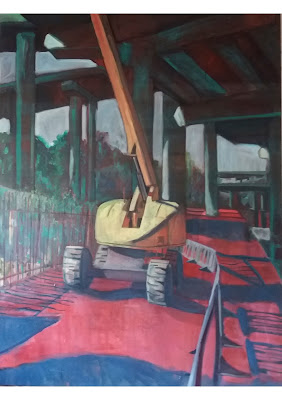 'Salute', oil on canvas, 200 x 150cms, 2018
Over the summer I have also completed this large painting, provisionally titled ‘Salute’. When I showed it my artist friend, Andrew Smith, he remarked on the Nazi salute quality of the large extended ‘arm’ of the vehicle, which, although not previously thought about by me, it’s an aspect I am now very excited about. It sort of ties in with other ideas I was trying to represent in it, such as it looking like some sort of bleak futuristic landscape populated by these abandoned and redundant, strange looking vehicles, a bit Star Wars/Mad Max. I distorted the colour, using the greens and pinks against the yellow and orange to add to the atmosphere to make it look slightly more unreal and otherworldly, but hopefully not too much so- I see it as a vision more in the not too distant, post-Brexit future.

The idea of a vision brings me neatly to my forthcoming exhibition with Andrew and Hugh Marwood, ‘Visions Of A Free-Floating Island’ at Nottingham’s Surface Gallery, opening on September 14th. Having now completed this large painting I think it would work well in the show, which has a definite ‘state of the nation’ feel about it,  and in the representation of my own work.

Posted by shaun morris at 22:46 No comments:

Standing on a beach staring at the sea...

sketchbook drawing, fine liner
It’s back to the grindstone of lecturing today as I return to work after the summer break. As ever I have had a busy summer with two lively children, aged 10 and 5, to look after- which is nice but is pretty physically and mentally exhausting. However, in the last few weeks I have completed a lot of drawing in my sketchbook whilst on the coast on our annual family holidays and feel quite buzzing with some new ideas.

sketchbook drawing, graphite
I always do quite a bit of ‘plein air’ drawing and painting whilst sat on the beach. This year I became very preoccupied on our trip to Filey on the East Yorkshire coast, which we have now been visiting for about 6 years, with drawing the many, many ruins of defence posts that were hastily built along the shoreline during the Second World War in case of invasion from the Nazi’s. Thankfully, they were never needed, and since then they have slowly collapsed and eroded and become covered in barnacles and seaweed from the power of the incoming tides and also as the cliffs have collapsed and changed. What you are left with all along the beach, amongst the green, silver and red natural rocks and stones, are huge blocks and slabs of concrete upended, overturned and set at strange unnatural angles often with rusted metal supports embedded, twisting and jutting from them. I draw them most years, but this year they seized my interest more keenly and I found myself obsessively drawing them every day. 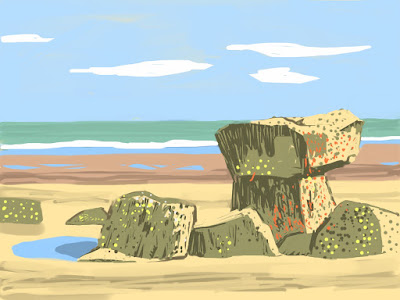 sketchbook drawing, ink
Their symbolic nature, as redundant, decaying objects created to protect our shores from foreign invaders seemed to chime somehow with Brexit and the sorry state the country seems to be in, with I fear much worse to follow post-Brexit. I’m reminded of all the nasty propaganda by the Leave campaign and their posters of ‘invading immigrants’ aimed at stoking racist fear and division and how we are all living with these consequences now with an increasingly frightening rise in far right activity and debate. 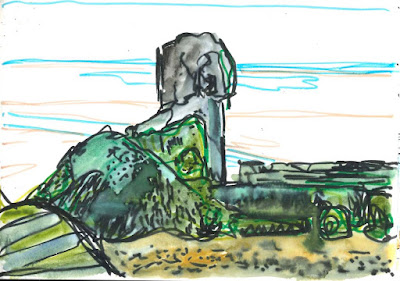 sketchbook drawing, ink and watercolour
Anyway…..I thought these drawings could be a possible natural follow on into creating some new painting and print work from my recent Brexit influenced ‘Street’ paintings and a chance to take my landscape work into uncharted waters (excuse the pun).

Posted by shaun morris at 10:45 No comments: