Death of the King 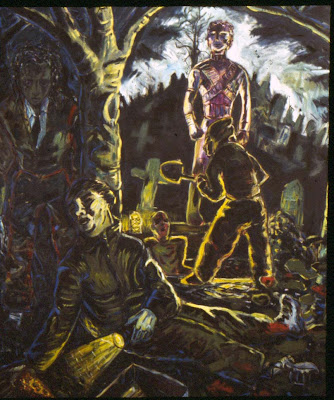 It was a shock to hear of Michael Jackson's death this morning. I thought it might be interesting today therefore, to share an old painting of mine which featured the King of Pop himself (in his Zombie/Thriller guise-that's him behind the tree), and strangely, in light of today's events, his imaginary grave. This was based on his 'Hitstory' record sleeve and the giant statue of himself that he floated down the Thames to launch the album. Whatever you might think of 'Wacko Jacko' it has to be said that he was a true one-off. 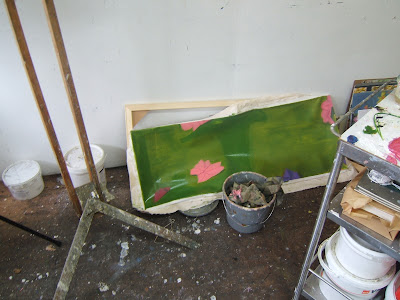 Green is a very difficult colour to work with. I worked on two canvasses yesterday with a lot of green to deal with that gave me a few headaches. It’s difficult to combine with other colours successfully, particularly when it’s the predominant colour, and also the properties of certain green oil paints are difficult to handle. Colours such as Terre Verte have a ‘fugitive’ quality, which means they are incredibly mobile and translucent on the surface of the canvas. It was these issues that gave me all sorts of problems.

I don’t usually use terre verte, or any other green paints, as I prefer to mix my own, but I’d bought a tube as I was seeking a particular green for these two paintings. I’d completed one of them several weeks ago, really struggling with the ‘fugitive’ green paint. Finally I completed it, but when drying out the green background had dried in a strange way. I thought that I would therefore re-paint it when I came to do the accompanying painting. I completed my new painting fairly quickly in the morning, with what I thought were pleasing results, and then started to apply the green to the other one. This was a disaster as the paint underneath reacted badly and it all started peeling away. Fed up, I decided to take this one off the stretcher, and re-stretch some new canvas on it, double prime it and then re-paint the painting afresh later that day as I had the colours all mixed. By teatime, I was ready to go and duly re-painted the original painting. This came out great using a darker, richer green than the previous one, after mixing it myself after using all the terre verte, than the one I had done that morning. This then made me look at this painting differently, and I decided to re-paint the green in this with this new colour and in a flatter way than previously. An hour later this looked much better. So much so that I then had a crisis with the new one I had just done before this, thinking it didn’t now look as good as the other one, and re-painted this to look more like the revised version of my morning painting! (are you keeping up? Believe me I was struggling to know where I was at this time with it all).

Often when I’m painting a point arrives when it feels like the ‘chase is on’- a different part of the brain kicks in and I’m just utterly focussed in trying to reach what seems unreachable. I will have set up the ‘scaffolding’, if you like, with my preparatory drawings and studies, transferring these to the canvas etc, but then, hopefully, you reach this point where you find yourself just having to kick the scaffolding away. So often the painting can appear to be within your grasp but then just slips away again. It can be incredibly exciting but also like you’re walking on a tightrope. 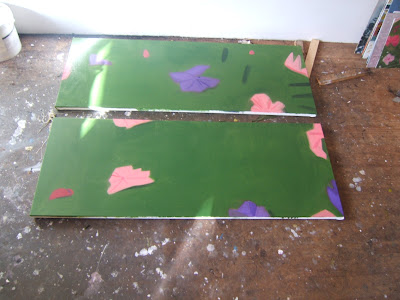 Eventually, with my brain spinning, I managed to get to a position with these paintings where I was pleased with both. I cleaned my brushes, and closed the studio door, exhausted. I went to look at them again the next day. This is a moment always filled with great trepidation. It almost feels like you are returning to the scene of the crime. Hopefully, with some perspective, it is now no longer a part of you and has become a thing that now stands on its own. If this has happened and it can stand up to my careful gaze, I turn it to the wall and think about the next one…
Posted by shaun morris at 20:03 No comments:

'The Meal', etching and aquatint 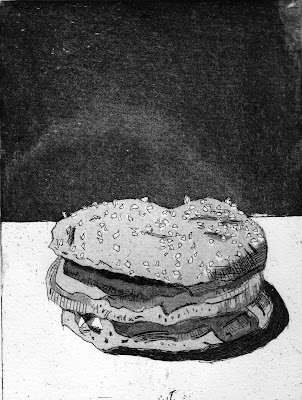 Here's a new etching and aquatint that I recently printed a small edition of. It's nice to work on something other than a portrait with my printmaking. I'm pretty pleased with it and hope to develop some further still lives for my printmaking work. The graphic qualities of the medium seem to lend themselves well to my deadpan images.
Posted by shaun morris at 18:13 No comments: 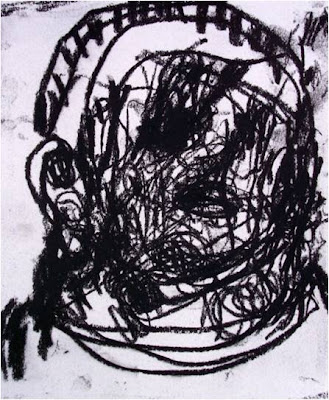 Continuing on the theme of drawing, I visited an artist friend of mine, Jonathan Marshall at the weekend at his home in County Durham. His own Fine Art practise stems from his interest in drawing and existential ideas concerning how the artist ‘that pushes forward the boundaries of new creativity must be aware of the void against which they create’, and how one deals with that crisis. Jonathan’s answer is for his drawings to form an enquiry into this crisis, countered with a desire to produce figurative work. He continually explores this through continual drawing, just with simple charcoal on paper, the motif of the head to look at ideas around identity and figurative purpose in the work. 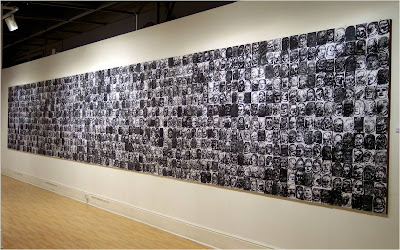 The ideas are pretty complicated (and as usual I’m not explaining them very well at all here!), but a couple of years ago I was deeply moved by an exhibition of Jonathan’s at Darlington Arts Centre, ‘Head Works’, where he installed over 1000 of these drawings on one long wall. Contemplating this wall of drawings, that just seemed to wrap themselves around you as your eyes darted from one drawing to the next trying to process the information, I was really struck by the intense futility and desperation present in the work, something Jonathan was trying to assert. The ‘existentialism’ and sense of the void seemed momentarily overwhelming. It was a very powerful experience. 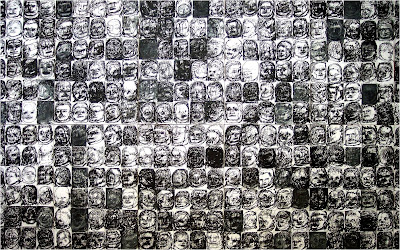 We found ourselves at the Durham L.I Museum and Arts Centre on Saturday, where this year’s Jerwood Drawing Prize was on show. I must say I was really disappointed by the exhibition. There were around 60 pieces selected from over 2500 entries, and I was really baffled how this could be the most interesting from such a large field. I love and appreciate drawing in its all different manifestations and forms, and look at drawings all the while, so it was dispiriting to see so many that were just plain nasty.
Posted by shaun morris at 20:17 No comments: 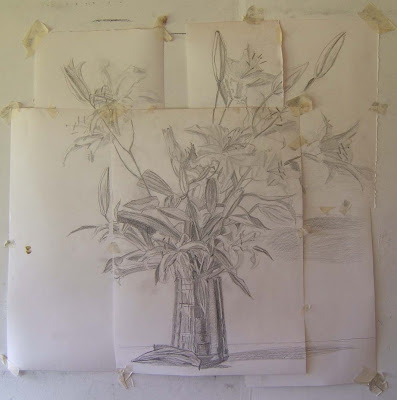 Drawing is at the core of all my practise. Everyone of my paintings begins with an observational drawing of some kind. I also make alot of small 'plein air' paintings which inform the work. I don't use photographs at all, as I find they stifle my interest in mark-making and a more perceptual approach to painting. I've been working on alot of new paintings over the last few months, mainly flowers and landscapes. Here are are a few examples of some of the drawings and studies I've been making and using . Some are just small sketchbook studies, others are more detailed pencil drawings, and there are some charcoal 'cartoons' as preparations for the paintings. There are also some examples of the paintings created outdoors which are in oil on board. 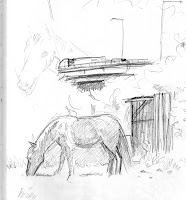 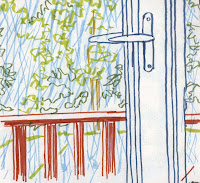 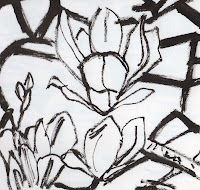 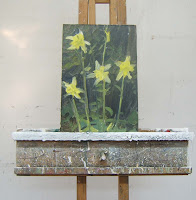 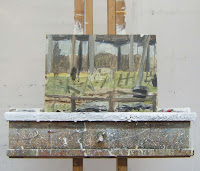 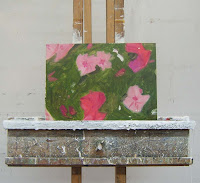 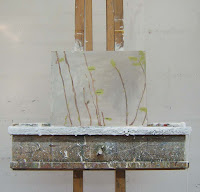 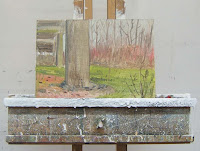 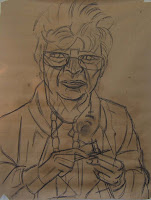 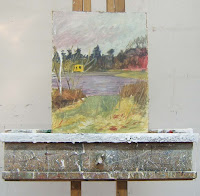 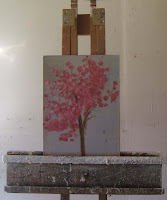 Posted by shaun morris at 10:47 No comments: