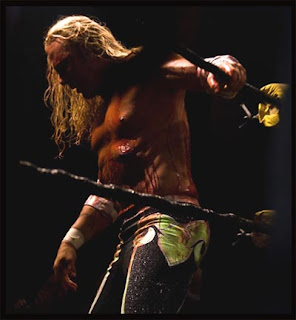 I’ve just been to see The Wrestler, the new film directed by Darren Aronofsky and starring Mickey Rourke. I really loved it. Mickey Rourke’s performance is just totally mesmerising, but I really enjoyed the way it was filmed. It had a terrific naturalism and , with a great eye for detail. Qualities I really admire.

Mickey Rourke’s body was fascinating too. It was a landscape of scars, cuts and bruises and corned beef like skin. His whole life’s story seemed to be held in it, particularly his face. It was very moving. I’d really recommend it.

I found myself questioning the violence that the sport celebrates , which was graphically represented in the film. Our young nephews are both obsessed with WWE and collect all the toys etc. It is so marketed at kids and a young audience that you do have to question them celebrating the values of smashing someone violently around the head with a metal chair (or an artificial leg)!

It’s all a far cry from the likes of Big Daddy, Mick McManus and Kendo Nagasaki, the wrestling I enjoyed as a kid on Saturday afternoons. For fans of that era and this peculiar strand of British sport, I’d recommend Simon Garfield’s book, ‘The Wrestling’. 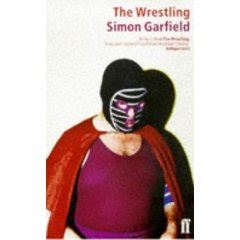 One of the other things I liked was the New Jersey locations in the film. I love those post- industrial, bleak and banal places, often captured almost romantically in the songs of Springsteen. They remind me of places like Sandwell in the Black Country, where I grew up; places always on the tipping point of survival, with lots of faceless industrial units and giant supermarkets. Funnily enough, I’ve recently discovered the wonderful landscapes of Rackstraw Downes. He depicts locations like this in a wonderful, unflinching way. 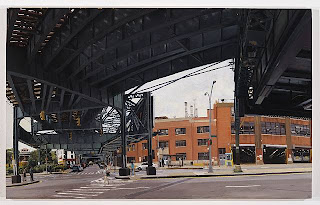 Springsteen contributes a great song to the closing credits of the film, which can be found as a bonus track on his brilliant new album, ‘Working On A Dream, which I’ve been enjoying all week.

Posted by chris cowdrill at 17:09 No comments: 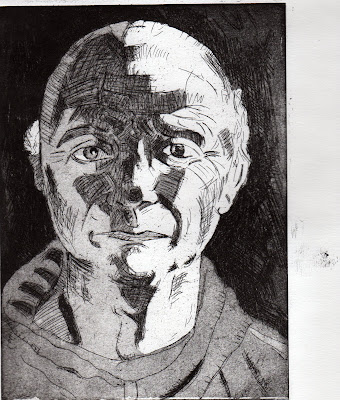 Finally! My first decent print from my time on the AA2A Scheme at Wolverhampton University. After about three months experimenting with different things I decided it was time to stop messing about and produce something half decent. This is still an experiment, my first aquatint etching, but I’m pretty pleased with it, and I’m going to develop these further. I spent the afternoon preparing another ten plates with hard grounds to work on.

It was interesting news about The Public in West Bromwich today. They have had their further funding request turned down by the Arts Council. I’ve been pretty discrete about my own experience of exhibiting there last summer, but I think it’s fair to say that this news is not a big surprise. At the end of the day it’s such a shame for the people of West Brom who I think have been really let down.
Posted by chris cowdrill at 22:04 No comments: 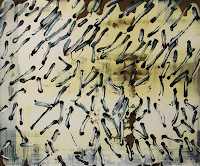 I’ve been working on a couple of new paintings over the last few weeks. Whilst painting I’ve thought a lot about an artist friend of mine who I studied alongside on my MA in Fine Art at Norwich School of Art between 1994-1995. Jamie Wallace was a really gifted painter, and was one of the first people who introduced me to the ideas behind a lot of abstract painting. Up until this point I’d been a bit sheltered from these things, as in my own work I’d been very much interested in making large scale figurative canvasses in the tradition of European history painting. Jamie held very strong opinions about art, what it was, and perhaps more importantly what it wasn’t, that often used to wind the other students and staff up (which I think he secretly enjoyed). Over tea in the School’s great refectory, he would spout forth about what he loved about a certain painter or approach to painting, and what he hated about others. I found myself sitting listening with increasing paranoia as most the things he seemed to hate were the things I was doing! But I was really interested in his ideas about the power in the material itself, and the expression to be found there, and the painting being this thing in itself: not a version of reality, but its own concrete reality. These are pretty traditional ideas now in painting, but at the time I was the one way behind, still trying to paint that version of reality, and these ideas were new to me. I liked Jamie’s paintings a great deal, and indeed have a couple at home. He’d spent a month on about 10-20 canvasses and then just threw them all out thoroughly depressed with what he’d done. Painting can be like that if you work liked we did. One thing we had in common was our ability to produce lots and lots of work, continually experimenting, with one crisis after the other, until you might get one decent painting. I wasn’t depressed by Jamie’s paintings though and duly jumped in the skip after them. Jamie never commented much on my own work. Some artist’s think its bad manners to comment on your work or show, unless asked, but I don’t hold much truck with that. But in Jamie’s case, as he walked through my studio space past my giant canvasses to the communal sink, his silence seemed to speak volumes. I wasn’t really bothered though. I had enough problems in my work without having to worry about these things too.

Anyway, to get to the point, if there is one, I find my approach to painting these days very much more aligned with the ideas behind abstract painting that Jamie talked so passionately about, despite still trying to create a form of representational painting. Over the last ten years or so I’ve been influenced a lot by American painters like Alex Katz, Fairfield Porter, and Jane Freilicher, who after the post-war dominance of Abstract Expressionism, very much struggled to create a new form of representational painting that shared the values of abstract art, rather than the tired, figurative painting that persisted, with it’s insistence on trying to breathe new life into old traditions. These other artists and others very much opened the door for so much contemporary figurative painting celebrated today, such as the work of Chuck Close, Luc Tuymans, and Elizabeth Peyton. They too offered me a desperately needed route out of the corner I had painted myself into in my Edinburgh studio at the time. I’ve found some of these ideas being particularly played out in these current paintings of mine which are based on studies of flowers and trees. This is why my thoughts have drifted to remembering Jamie.

I read recently an intere 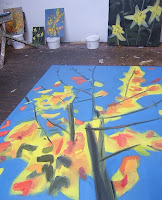 sting article by Hilton Kramer, the New York Observer Art Critic, on an exhibition by Freilicher, where he discussed the influence of the Abstract Expressionists on her work and that of Porter and Katz. He remarked that ‘in the long term, representational painters may have derived greater benefits- pictorial, aesthetic benefits- from the Abstract Expressionists than abstract painters have.’ I certainly count myself amongst those that have. Fairfield Porter, a critic and painter was according to Kramer obsessed with this idea of influence, to the point of, in writing about abstract painting, he often went looking for its subject matter, and in writing about realist painting, he was mainly concerned with pure pictorial form.


Looking at my new paintings, some of the qualities in the mark-making strangely remind me of the work I made in Norwich. I’ve unfortunately not seen much of Jamie and his lovely Danish wife, Mette since the MA as they live in Copenhagen now. We just send each other the odd email. Despite the differences in our ideas about painting during that year, we became firm friends though. One of the few compliments I got from him was at the end of our MA year. We had had to put on a show at the Norwich Gallery and a seminar was organised chaired by curator Linda Morris and critic Sasha Craddock. Craddock was really dismissive of my own painting in the show, and in the pub after Jamie could tell I was a bit chewed up about it. He turned to me and said, ‘Shaun, these critics think they know more about what you’re doing than you do. And they don’t. It’s a good painting. Forget about it’. My anxieties immediately evaporated. Jamie’s brilliant words of wisdom saved the day this time. I always carry them with me. He has a great website now where you can see examples of his paintings which he makes from a studio in Sweden. Just follow the link below: