Something In The Night... 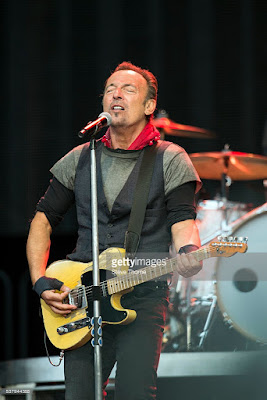 The Boss: Bruce Springsteen at Coventry Ricoh Stadium 2016
Any readers of this blog, even the occasional one, will have probably picked up on my passion for Bruce Springsteen’s music as reflected in my exhibition titles, writings on his concerts and records, and various other references from titles of individual paintings and my peppering of blog posts with references to lyrics and quotes.

A couple of weeks ago I saw him play live with the mighty E Street Band once again at Coventry’s Ricoh Arena. It was another amazing performance by the band, this time more stripped down to their core following the large ensemble, which included a full horn and percussion section and backing singers, which accompanied the last tour. The pared down band seemed possessed of a raw force that was at times very moving, always exciting, and also lots of fun as ever, particularly as the show reached its three and a half hour climax. One had to wonder as you joined the fifty thousand fans that drifted out the stadium in a state of euphoric awe and wonderment, and sheer exhilarated exhaustion, how Bruce does it at each night. I’ve never been to any gig that becomes such an immersive, emotional experience such as these. I was nearly in tears when at the start of the gig, after a lovely opener of ‘For You’ played unaccompanied at the piano, the whole band joined him onstage to open with ‘Something In The Night’ from ‘Darkness On The Edge Of Town’. It was an incredible moment as the piano intro started and the drums rumbled in the song’s slow build-up and Bruce’s howl (link: https://www.youtube.com/watch?v=QWZTduaV8vY) 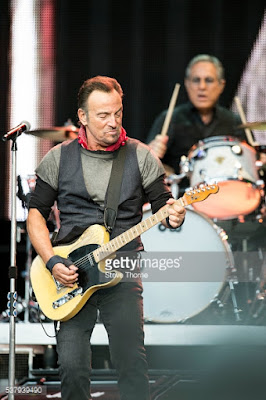 I could hardly believe I was hearing it, it’s such a great song, and it set the scene and atmosphere with such a powerful and tense grip that the hairs on my arms literally stood up.  And from there you find yourself on this incredible 3 hour journey, where you really feel you are seeing something magical and thrilling unfold before your eyes as the setlist is skillfully built from a heady mixture of requests from the crowd, the popular and more well-known songs (this time including a blistering ‘Born In The USA’, a real highlight in a gig full of highlights), covers, and Bruce’s own selections from 40 years of songs. Bruce with guitarist Nils Lofgren
I feel so alive at these gigs that it is difficult to explain in words to the uninitiated, but you can see it in the sheer and unadulterated joy and love you see in the faces of the fans at each gig which are frequently projected onto the large screens at the front and side of the stage throughout, so caught up in the moment. It’s a wonderful and inspiring sight and testament to the experience. 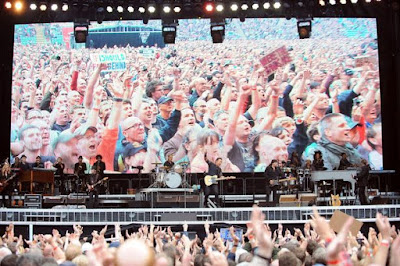 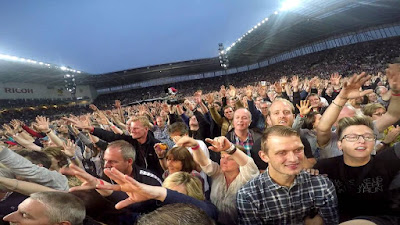 A few days later I went to a gig by Hugh Masekela with some friends who had also been to see Bruce at Coventry. We talked non stop about the concert on the way there, and when we arrived we met a friend of theirs in the bar who had also been, and for him, despite being a music nut, this had been his first time at a Bruce gig.  On Facebook he had apparently posted, “I can’t believe it. Why have I never done that before?!!!!”. On meeting him, I recognized that familiar ‘Bruce glow’ I always have following one of his concerts. It’s a mixture of warmth, joy and inspiration. I know I go about these things, but I’m not the only one. Here’s a link to a recent Guardian article that says pretty much the same as I just have, only better. I should have just directed you there at the start of this post:
https://www.theguardian.com/music/musicblog/2016/jun/10/bruce-springsteen-makes-you-feel-alive-wembley-stadium 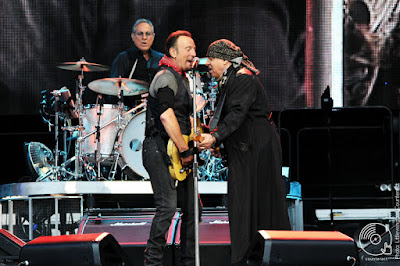 Bruce with Little Steven Van Zandt
And here is a link to one of the best Boss fan websites, Backstreets, where you can see for yourself the diversity of Bruce’s setlists and some great accounts of the recent British leg of his current European tour: http://www.backstreets.com/ 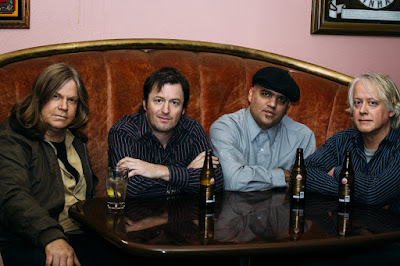 Richmond Fontaine
When I return to earth I visit the studio and listen to nothing but Bruce for the next few weeks (as well as my other new favourite band, Richmond Fontaine, whose songs seem inhabited by the same sort of characters in many of Bruce’s songs), re-read ‘The Wanderers’ by Richard Price, watch lots of Bruce on Youtube (if you’ve not heard his recent Prince tribute of a cover of ‘Purple Rain’ you must check it out: https://www.youtube.com/watch?v=XavU8vH1ZLg ), start to read ‘Independence Day’ by Richard Ford, and follow lots of other Bruce threads and connections from David Simon to Rob Brydon…. 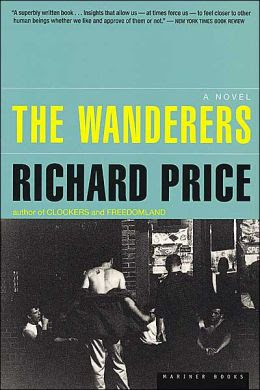 Posted by shaun morris at 22:28 No comments: