Just another rejection letter for the pile... 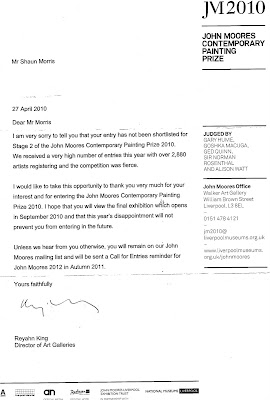 An ongoing series of works....
Posted by shaun morris at 15:29 No comments:

Chris Ofili at Tate Britain; Alex Katz at Timothy Taylor Gallery; Franz Ackermann at Mason’s Yard; Indian Portraits at The National Portrait Gallery: a recent weekend visit to London saw me take in a lot of great painting exhibitions that I was really inspired by and felt a strong connection with. These, and the Eastern Art gallery at the New Ashmolean in Oxford, made me excited about the possibilities of organising a new exhibition of my own paintings. This week I finally ‘grasped the nettle’ and went to see Alan Cheeseman (left portrait) at his artist-run Chameleon Gallery in Walsall about holding a show in November. Put Saturday 6th November 2010 in your diaries as there will be a private view then, followed by an exhibition running until the following Saturday 13th November. There will be more details to follow nearer the time.

I’ve created many quite different and experimental paintings over the last year or so inspired by nature that I’ve been really keen to show as a group. I’ve been dithering about, seeking different, more commercial opportunities for some time, but I know that the opportunity to display something more creative and personal would not be with these sort of venues at the level I work at (definitely the lower leagues…), hence my contacting The Chameleon Gallery. I’m really excited by it now, and hope to put on something a bit different to my other installations. We’ll see…Here’s a link to the Chameleon Arts website:
www.chameleonarts.co.uk

I’ve also updated some new paintings on both the ‘Portrait’ and ‘Nature’ section of the website, some examples of which can be seen above. I’ve also changed the drawings portfolio to a ‘Print’ one, to see how this goes. The prints have created more interest over the last few months, and I think they look more developed and stronger. The prices of my works have also changed quite a bit. They are less expensive than before. My recent experience with Tregoning Fine Art in Derby has helped me price things more competitively I hope. There is a real variety in the recent work. I’d love to hear if people thought any particular paintings were working better than others. Any comments are always welcome!!!
Posted by shaun morris at 21:36 No comments:

Six Hours In The Studio... 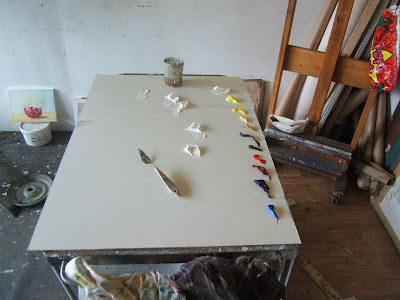 I've spent all day in the studio today working on a new still life. I decided to photograph the various key stages to share on the blog. They illustrate some aspects of the process, but on reflection they don't really do justice to the physical reality of executing such a painting and the decisions that are made in the moment as one pushes and works the paint 'wet in wet'. 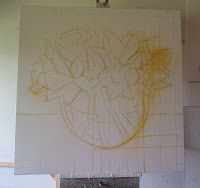 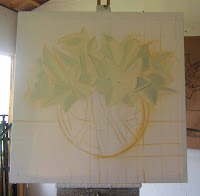 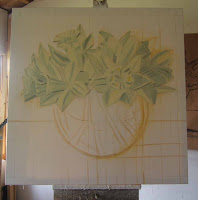 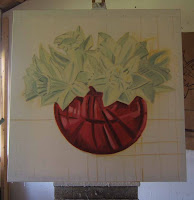 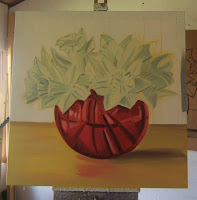 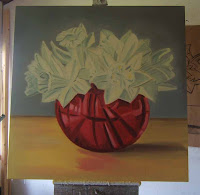 The painting eventually took six hours to complete. I had a crisis at the end and spent the last hour completing re-painting the flowers to simplify them and emphasise their shape rather than their detail and 'open up' the painting to make it look more spontaneous. 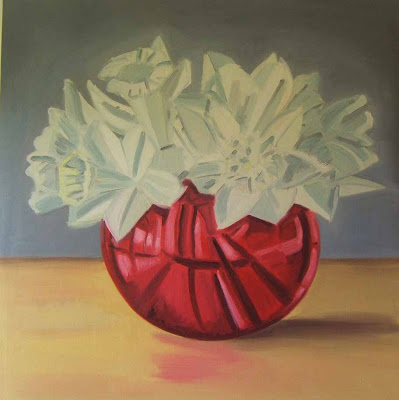 And here is the finished piece. I'll call it 'White Daffodils in Red Round Vase' for now. It's oil on canvas, 100 x 100cms.
It's strange after years of painting to be depicting such traditional subjects as flowers in vases. I don't care much about whether it is seen as traditional or possibly a safe subject. One just do what feels right at the time. What else can you do? The motivation has come from all the flowers that have existed, and continue to exist in my life, since my brother's death. They remain a focus for contemplation when dealing with difficult and complex feelings, much like the act of painting them. It will have been a year later on this month.
Posted by shaun morris at 21:31 No comments: 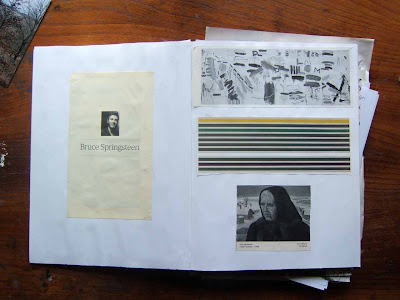 I love my time in the studio. It’s a retreat where I really enjoy the time spent developing the work as much as the act of making the paintings themselves. I’ve mentioned before that I try and actually carry out the painting in one day, and that this can be very intense as I try and get ‘in the moment’ and give myself up to the process. I takes a great deal of effort and concentration. The development of the work to get to the point of making the paintings on these days is a much slower process. This can be anything from weeks, months, and even years. I spend more time thinking about the work as I do creating it. 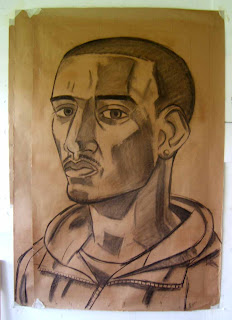 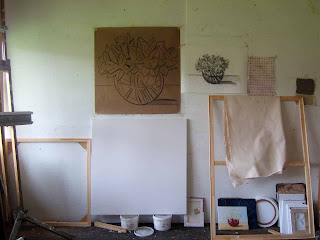 I draw in sketchbooks, anything from spontaneous sketches to more detailed drawings over several hours, to generate material and ideas. Most of the time these drawings are filed away in the plan chest or remain in the books, but every now and then I will go through them and ‘rediscover’ in them qualities I had not seen before, or that now resonate with the ideas I am working with now. I will then take these drawings and develop them further by making larger charcoal drawings, which helps me get more of a sense as to how they will work as paintings. I then make chalk pastel or painted studies in oil, where I try to explore colour and light (this can often necessitate returning to the original subject in some form), before then exploring the scale that I think is right for the painting. I think a lot about scale. I then make a final preparatory ‘to scale’ drawing in charcoal before putting a stretcher together and stretching and priming the canvas. The photos above show some of the processes I’ve used to work towards two painting I’m hoping to work on in the next few days. 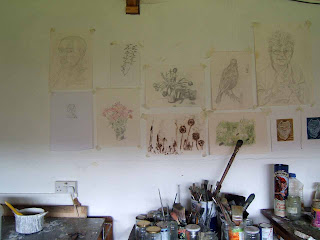 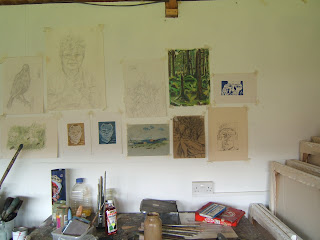 Here are some images of the studio wall at present that may help to illustrate this. A lot of these drawings are actually quite old, but seem exciting to me now. I like the feel of their juxtaposition on the wall and just living with the feelings this creates. Some of these drawings I know I still won’t touch again (I just don’t have the time as much as anything), but I know that they have a part to play at this stage, however subtle. I’ll spend a long time just looking at these things. 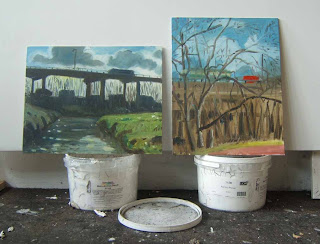 Above are a couple of recent ‘plein air’ paintings of the M5 in West Bromwich. I’m sure they will develop further at some point. 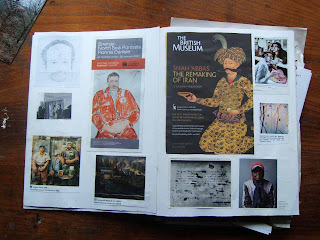 I keep big ‘scrapbooks’ of articles and images too, that all feed into the creative process and act as inspiration. These come from all sorts of different sources; articles on favourite artists; images from painting journals and newspapers; reviews; interviews. I’m really fascinated by, and love reading about, creativity and how artists think and make their work. This isn’t just painters and artists though, I love reading about music too and how great records were made. I know they can make it look easy, but as someone who tries to be creative too, I know just how difficult and how much effort is required to create anything seemingly worthwhile.

I hope you find this insight into my own creative endeavours interesting…
Posted by shaun morris at 12:28 No comments: