Home of the Lost and Found 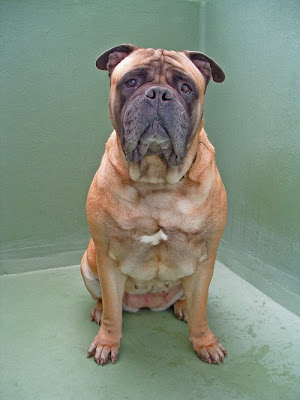 I went to a private view yesterday at the unlikely venue of Birmingham Dogs Home. ‘Home for the Lost and Found’ was an exhibition of photographs by an artist friend, Elizabeth Lee. They were, at times very moving, portraits of the dogs at the Home that Liz had spent the last few months photographing. She faced all sorts of technical difficulties as she wasn’t allowed into the pens with the dogs, meaning she had to photograph through the small protective mesh in very gloomy light. The photographs were installed around the Home, so you were taken on this quite harrowing journey past all these dogs in their pens howling for your attention. It was quite an experience. I nearly came home with a particularly forlorn greyhound, before being pleased to see that they had been ‘reserved’ and would hopefully soon be finding themselves in a new home. 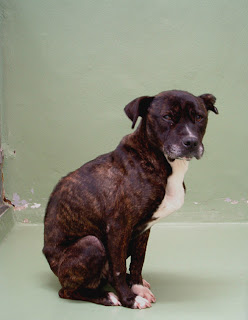 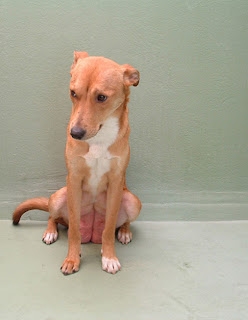 I used to teach Liz years ago when she studied for her HND Fine Art. It’s great to see her continuing to do such interesting work. Here’s a link to her website which is worth visiting ‘Stanley Dog of War’ for, and a recent feature in the Birmingham Post on her work. She makes some really interesting points that I share about the difficulties of being an artist in the West Midlands. The exhibition continues until the 16th May at Birmingham Dogs Home New Bartholomew Street Birmingham B5 5QS, Mon-Sat 11.00am-4.45pm
www.birminghamdogshome.org.uk
http://www.elizabethjlee.co.uk/
www.birminghampost.net/life-leisure-birmingham-guide/birmingham-culture/...art/.../snail-sheds-light-on-elizabeth-lee-s-opinions-65233-21559587/
Posted by chris cowdrill at 18:46 No comments: 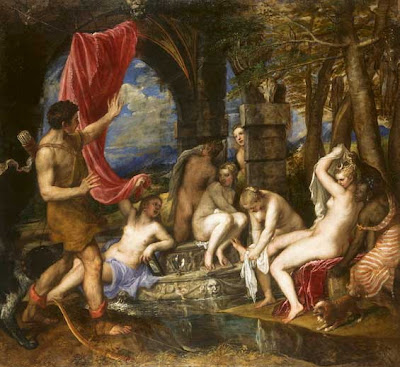 I visited the new exhibition at Compton Verney yesterday. ‘Diana and Actaeon, The Forbidden Gaze’ was an exhibition that initially centred around the mythological tale of ‘Acteaon, a skilled and dedicated hunter who, when out hunting with his hounds, happens to approach Diana bathing in a stream with her companions. Acteon is transfixed by Diana’s nakedness and beauty; Diana is momentarily passive and vulnerable in his gaze and seeks revenge for his intrusion of privacy. Diana transforms Acteaon into a stag and sets his own dogs on him, tearing him to pieces.’
The exhibition opened with a reproduction of a Titian based on the theme (which was recently acquired by The National Gallery). Some say that Titian was the first modern painter with his later works such as 'The Flaying of Marsyas' (below). The violence of the scene is superbly expressed in the painterliness of Titian's brushwork. 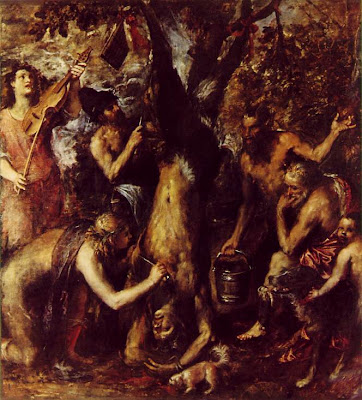 The show then explored in increasingly graphic and sexual ways, through both historical and contemporary works of art, how the depiction of the female naked body has continued to persist as a genre in European fine art. Importantly it looked at ‘the cultural and social influences involved in seeing- and with this, possible feelings of embarrassment, fascination, guilt and pleasure’. It certainly did push this side of things. I’ve never seen so many images of female genitalia under one roof! Often on a very large scale. How very rude...On a more serious note, it was another really varied and well curated exhibition from Compton Verney. 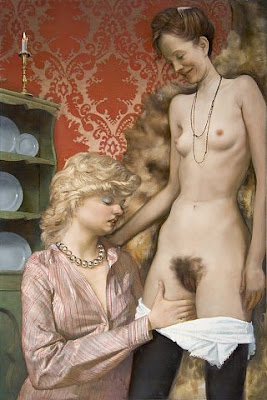 John Currin, 'The Dane', oil on canvas, 2006
John Currin, the celebrated American painter, had this piece above represented. There is a lot made of Currin’s virtuosity as a painter, but I’m not sure. He is skilfull to be sure, but no more than many painters. I don’t like the bits where he has ‘exquisitively rendered a golden candle stick’ or whatever. They just seem quite academic exercises you once would have dealt with at art school, and often spoil the unity of the painting. It’s the images and ideas that are interesting. But again, I’m not sure how interesting these are. I saw his retrospective at The Serpentine Gallery a few years ago, and really enjoyed it. I then caught it again a few months later at The Whitney in New York, and found it so empty and irritating. I find him confusing. He is very interested in interview however. There is a link below to an interview, where he talks about these recent paintings derived from Danish pornography. Apparently, the idea behind these came out of his anger at the 9/11 bombings, which I found fascinating:
http://www.independent.co.uk/arts-entertainment/art/features/john-currin-the-filth-and-the-fury-795525.html
I’ll leave the last word to two old ladies I overheard in front of Currin’s painting, ‘ It’s all very interesting, but you wouldn’t be able to have it on your living room wall when the grandchildren come around’.
Posted by chris cowdrill at 10:41 No comments:

George Shaw and The Specials 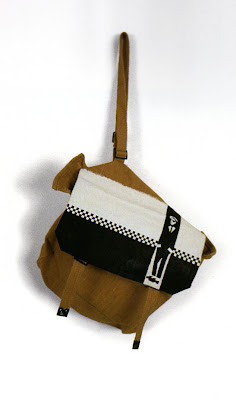 George Shaw, 'For The Boys On The Back Seat, acrylic on rucksack, 1999

Wasn’t it brilliant to see the reformed Specials on ‘Later…with Jools Holland’ last week? It was a reminder of how powerful and original their music was. I was a bit too young to appreciate them in their heyday, but I have been a fan for a long time. I remember the impact they and other 2-Tone bands had on the older kids at my school though, who used to be dressed to impress in their loafers, parkas, and Bobby Punn trousers. The music and lyrics came from a working class culture that really struck a chord with myself and so many others in it’s authenticity. The social and political observations were always so spot-on. I’m kicking myself I didn’t get a ticket for one of the reformed gigs now! I got all wrapped in the ‘it’s not The Specials without Jerry Dammers’ thing. The band give a good account of all this in this month’s Q magazine. 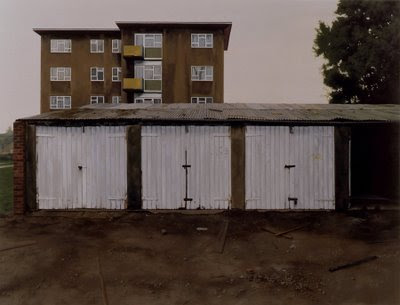 George Shaw, ' Scenes From The Passion', humbrol enamel on board, 2001

One of the most interesting artists of recent years for me has been the painter George Shaw. He is famous for his meticulous depictions in Humbrol Enamel paint on board of the Coventry housing estate he grew up on. He has however also created other pieces and drawings that reflect his admiration of The Specials too, and interest in certain areas of British working class culture. Culture as depicted in the films of Ken Loach, the ‘Plays for Today’ of the sixties and seventies, the books of Alan Sillitoe and Stan Barstow, and TV such as ‘Whatever Happened To The Likely Lads’ and ‘Auf Wiedersehn,Pet’ by Dick Clement and Ian La Frenais. It is an interest I share, but have not met many other people, least of all artists, with much interest in this, so I was naturally drawn to these influences in Shaw’s work. They are very subtlely presented however, in photo’s of his studio, or in catalogues rather than directly in the paintings. It seems to suggest the heart that beats beneath the work. Here's a good link:
www.channel4.com/culture/microsites/A/art_show/george_shaw/ 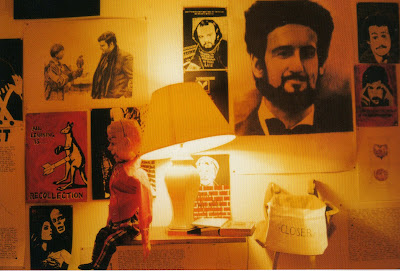 George Shaw (with John Strutton), 'The Land of Nod,' installation view, Lift Gallery 1999
The recent films by director Shane Meadows, such as ‘This Is England’, and ‘Dead Man’s Shows’, seem to have a quality, passion and again, authenticity straight out of this era and culture too. You can see that he is obviously influenced by these things, but seems to have managed to bring them to a whole new audience. 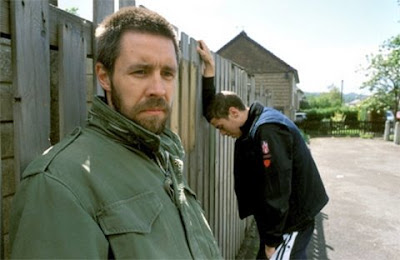 still from 'Dead Man's Shoes'
Posted by chris cowdrill at 09:40 No comments: