'Visions Of A Free-Floating Island'- Notes from an exhibition

So ‘Visions Of A Free-Floating Island’ was installed and opened just over a week ago now at Nottingham’s Surface Gallery. It has just until Saturday to run.

It turned out to be a stressful hang due to the sheer volume of work we had to install to fill the two generous gallery spaces between the 3 of us. So fitting this around jobs and family life was difficult and meant working late into the night and up to the wire before the Friday night opening, which saw quite a few people turn out. Most of my paintings were hung in the upstairs gallery room, a great space for paintings during the day, and I managed to hang nearly all of my ‘The Street’ work as one ‘suite’, if you like, which is what I was hoping for. I had some interesting conversations with people about them, in particular with a fellow artist/art teacher who appreciated what he regarded as their thoughtfulness and the careful consideration in which they were composed and put together. It was nice to have this recognised. 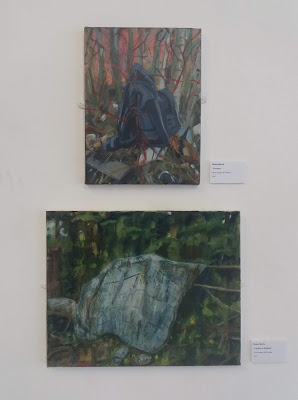 It’s been good to see the show come together and to see the work of my fellow artists Andy and Hugh in the flesh at last after only seeing them on various blogs and on the occasional visit. I’ve taken a lot from that experience so far, but am left unsure about my own contribution in the end. I’m not quite sure why. Downstairs we hung some of my ‘Rough Sleeper’ paintings, but I didn’t think they cut it that well. They were too blunt and should have been developed further. Also, ‘Salute’, the biggest painting in the show and something I worked hard on over the summer just didn’t seem to do it either. Whatever ‘it’ is, but it didn’t do it for me (or anyone else it seemed). 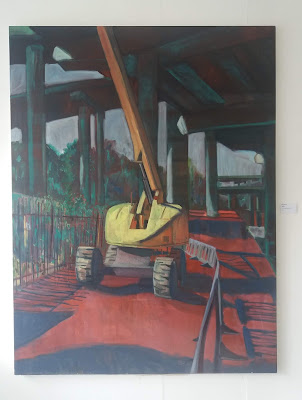 I like many of the ‘The Street’ paintings, particularly a new larger one of a digger which I included, but when it came to giving a talk about them on Saturday in the gallery I made a really clumsy and awkward job of it. Partly this was due to not being that prepared if I’m honest, having had a stressful busy week teaching and then being laid up with a really heavy cold the day before which I still had on the Saturday (and still now..), but then, when I look back, I found myself actually not wanting to talk about the paintings that much either. I tried talking about them in a ‘Brexit/austerity’ type context, I think as much for the themes seemingly underpinning the show and how we marketed it, especially in Hugh’s work, whose sculptures and paintings on fridge doors I shared much of the room with. My feelings about Brexit had been an original starting point for my ‘Street’ paintings, at least psychologically and metaphorically in how I perceived and selected the objects I found myself depicting, but certainly was not the end point, which with ‘The Red Window’ eighteen months later, was about something much more personal. I didn’t want to reduce them or simplify them, I wanted to keep their reading much more open, but I did do that with my talk, and so it all ended up sounding a bit naff and lacking the subtlety I hope the paintings possess. As I say, a bit more preparation would have helped. I feel fed up with myself about it. 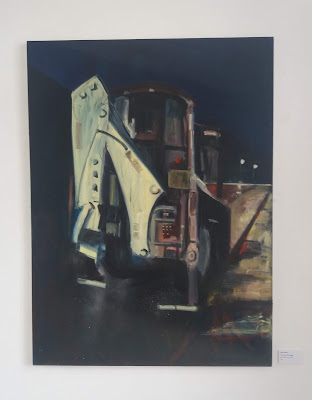 The idea of a dialogue across the work of us three artists is apparent in many ways, but between us, despite the common themes that occur, we have very different approaches. It is fair to say that my work is very much in dialogue with the traditions of painting, and I think these paintings are probably the most traditional I’ve made with references to much older Spanish masters like Zurbaran and the so-called ‘beauty in the banal’ of Cotan’s still life paintings. Hugh’s mixed media paintings, sculptures and assemblages seem to excitedly fizz with Twentieth Century Modernist references, from the precursors of Pop Art such as Jasper Johns and Robert Rauschenberg, and their engagement with ready-made objects, and the Pop Art that followed. 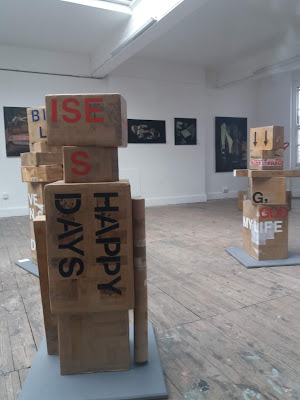 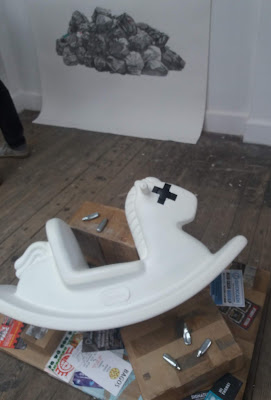 It was artist Sol Le Witt who famously believed in wedding yourself to a process, often with self-imposed limits, and in the 6 years now I have known Hugh’s work he also seems to epitomise this value, repeating certain processes in the creation of the work: the use of stencils to convey found words and messages; the stencilled dots; the distressed paint; the use of tape to build surfaces more sculpturally; and a heavy reliance on collage, be that in the service of various printed images or to create texture. In all Hugh’s work there is a love of process and craft. His ventures into using more ready-made objects such as boxes and discarded toys and fridge doors in this exhibition to create assemblage-type sculptures and paintings serve his ideas well. The strange cardboard box figure sculptures had a weird dystopian sci-fi feel I thought. With Hugh’s work there is always one hand firmly engaged in the contemporary world and modern life and the other one more nostalgically exploring the world of mid-twentieth century modernism in his use of visual language.

Hugh Marwood 'This S(c)epic Isle', mixed media paintings
With an MPhil in English Literature and an MA in Fine Art it’s probably not a big surprise that Andrew’s work straddles and combines his interest in writing with interests in painting, drawing and sculpture (and photography and film). In one incredible piece he exhibits 26 A4 pages of text he has combined, cut-up, manipulated based on the language used and excerpts from exhibition reviews in Art Monthly with the text used in the ‘adult colouring books’ purportedly good for your well-being and mindfulness that are popular. The piece is really impressive and rigorous, especially on this scale and again for an interest shared in process, and complements really well his large scale drawings, reminiscent of colouring book illustrations, which are actually enlarged print-outs from drawings made on the computer. These are then meticulously coloured in using either felt-tips or pencil crayons. The pencil crayon ones look nicer, but the felt-tip ones are funny for their more laboured look reflecting what a pain in the arse felt-tips are to use, despite their seductive bright colours (as a parent who spends time with kids and felt pens I can testify to this). I can’t imagine this very successfully inducing a feeling of well-being. The subject matter in the drawings is nicely at odds with the process and references, with images appropriated from the fast-food menus frequently shoved through letterboxes, puzzled looking dogs, bin bags as ‘lead balloons’, and precariously balanced building bricks on pallets. As with all the work in the show it is again really well crafted. 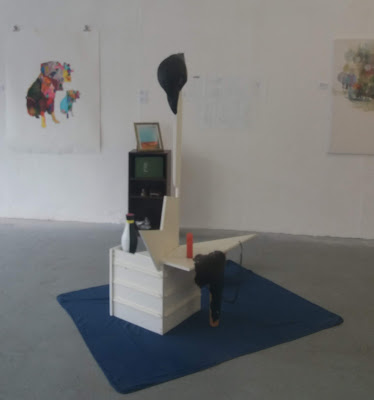 Andrew Smith's sculptures and drawings
The work by Andrew I found myself most drawn in by though were two Dadaist sculptures assembled and created using a variety of different materials, including a Penguin mask, a bright pink dildo, and a map of Africa in one piece, and a standard lamp with a leather shoe sewn onto it, a pennant, and a strange pink fabric trunk reminiscent of Max Ernst’s, ‘Celebes’ 1921 painting. Holding all these elements together were structures created and re-modelled, apparently with a lot of help from Hugh, out of Ikea flat pack furniture. When Andrew talked about them on Saturday it was fascinating to learn about the layers of meaning associated with the individual parts that made up the whole. Sitting behind these sculptures was a curious Ikea ‘cabinet of curiosities’ of various objects- a picture in a frame, a skull fragment, and an artist’s book by Andrew titled ‘From Letter From China’, which contained some terrific writing and photographs. I thought it was probably the strongest thing in the show but could have been easily overlooked (alongside the lovely Ikea “Lack’ illustrated instructions for how to assemble the flat-pack sculptures, which were pinned to the wall above the cabinet-I loved how they looked so authentic).

I don’t think any of us are the types to comfortably give ourselves a pat on the back for all the effort we have put into our respective works and the show itself, but I think we should. It’s an ambitious exhibition of its kind and I think it’s pretty strong. Other than that…well go see yourself if you get the chance. It’s only on for 2 more days! 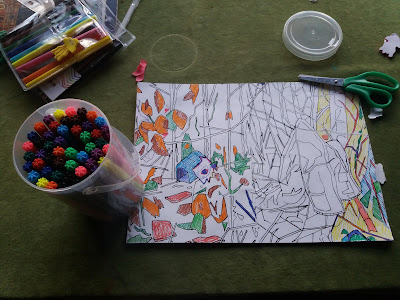 Apologies for the rather rubbish photos that accompany this post. I've been a bit useless at photographing the show. There are some better ones on Hugh's blog here: http://hughmarwood.blogspot.com/2018/09/andrew-smith-shaun-morris-hugh-marwood.html