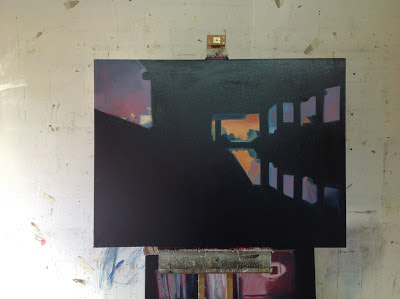 I completed this painting yesterday. This piece and the last one, feel more ‘built’ than previous paintings. I’m also enjoying (and understanding) working from photographs more now; exploring the idea of translating from one medium to another, looking at and appreciating the differences in visual language and the very different processes used to make the image, and frankly the freedom of having images available to work from when studio time often feels so limited.  I can’t wait to develop the next one, whatever that may be…
Posted by shaun morris at 13:17 No comments:

Man Gave Names To All The Animals...