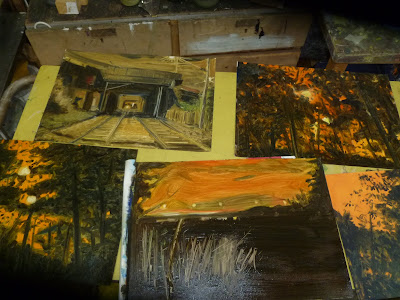 I’ve been trying to get going my ideas around the ‘Stolen Car’/nocturnal motorway scenes in the studio over the last few weeks. I’ve been making some small oil studies on painting paper and card based on a set of photos made last autumn on location there. I’ve avoided using photos for years, but there seemed something a bit too unsafe about working on location at this particular place that made me be more pragrammatic about it. At this early stage, the ideas seemed more important than the way I developed them. 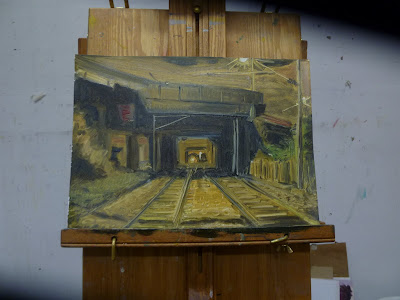 Still, I do prefer working on location and getting these studies moving away from photos to ideas about painting is proving challenging. It’s not as exciting as being there and taking my preferred perceptual approach. I must also admit however, that after years of not using photos I do have a clearer idea of what I do and don’t want from them. Here are a couple of the ones I’ve made so far.

This one of the train line, above, reminds me of Edward Hopper’s images a little. 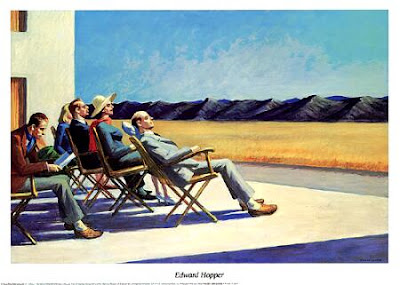 (Never have I been more disappointed with an exhibition than at Edward Hopper’s retrospective at Tate Modern a few years ago. The technique seemed fairly unexciting and the work functioned more successfully as images than paintings. Even these seemed tired after a bit though, and I really disliked the later stuff like the image below which seemed so mannered in it’s ideas about emptiness. It was Luc Tuymans, who had a brilliant retrospective in the adjoining gallery who made me look at them from a different and more interesting perspective, when he referred to Hopper’s figures as being like ‘puppets in toy houses’. This seemed a more interesting proposition). 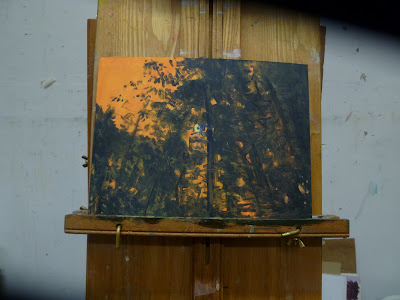 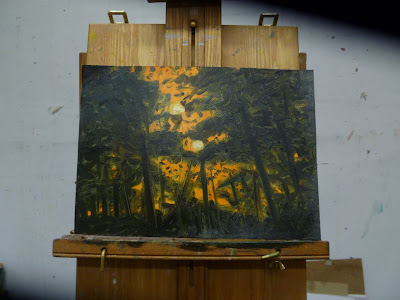 This other studies above are views through the trees of the motorway above me, with the motorway lights shining like two suns.

I’ve been making these to some lovely music in the studio, including the new Felice Brothers album, ‘Celebration, Florida’, and Bon Iver’s self titled new album, which is my favourite thing so far this year. I’ve also been loving Doug Paisley’s ‘Constant Companion’ over the last few months. It’s the sort of album you feel like you have listened to all your life. It’s like putting on a pair of the most comfortable slippers at the end of a hard day. 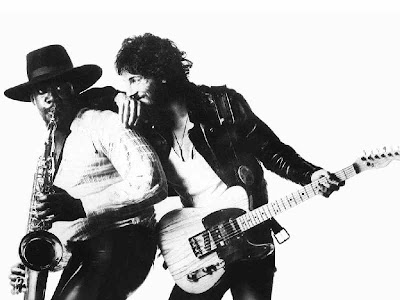 I’m deeply saddened to hear of the death of Clarence Clemons, saxophonist and 40 year member of Bruce Springsteen’s E Street Band this weekend. . He died, aged 69, after complications from a stroke.

I’m a huge Bruce fan, and Clarence’s loss feels enormous. The E Street Band have just felt like this unstoppable gang over the years, this ‘Band of Brothers’, as Bruce has called it, and Clarence has always felt like Bruce’s right hand man. The warmth felt by fans towards him whenever I have seen them live has always swept up from the audience, as he has stepped up to the mike to deliver another beautiful and passionate sax solo. He is totally irreplaceable.

A friend texted me the news saying he had played ‘Jungleland’ really loud in tribute. That’s a wonderful choice amongst so many iconic solos to choose from and I did the same. It’s well documented how much Bruce pushed Clarence to deliver that solo time and time again in the ‘Born To Run’ sessions.

There are lots of heartfelt tributes on the net, including one from Bruce on his website. I’ve provided below a youtube link to a song performed by some of the band which for me seems to sum up some of my feelings. ‘If I Should Fall Behind’ is a beautiful song, which these days always makes me think of my brother, Stu. I always find myself wiping away a tear after this particularly lovely performance, which has a great solo from Clarence. It must be terrible for Bruce and the rest of the band as they mourn the loss of their brother. 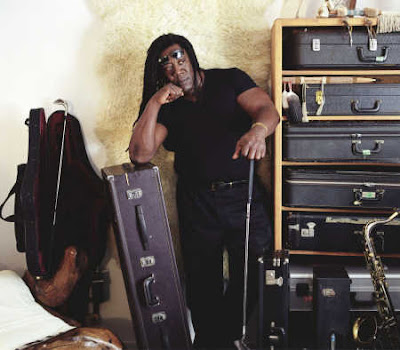 Posted by shaun morris at 10:36 No comments: 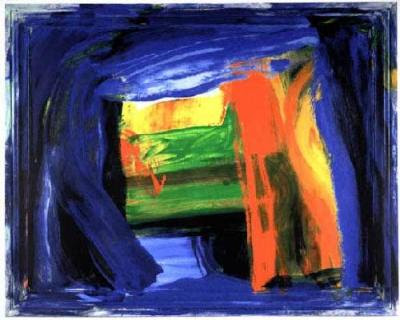 On holiday in Devon last week I saw a wonderful exhibition of Howard Hodgkin Prints that really blew me away. It was at the Burton Art Gallery in Bideford, which I’ve previously visited, and have always seen some great stuff. Despite it’s sleepy location it exhibits some really contemporary work. It has a terrific craft gallery too, where you can pick up pieces by top ceramicists like the mighty Sven Baeur, who’s studio is based in Devon, relatively cheaply. 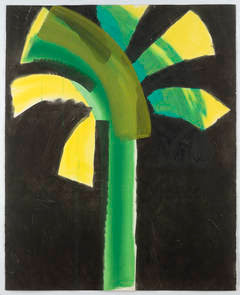 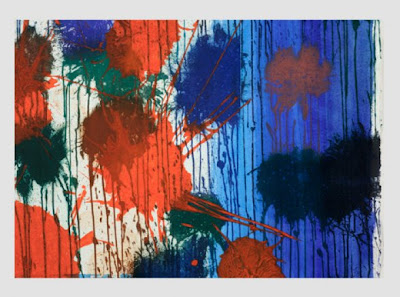 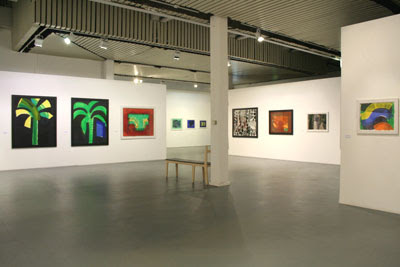 The Hodgkin exhibition was a real surprise and incredibly exciting. I’m more familiar with the paintings, but these prints were a revelation in their variety and sheer formal and technical inventiveness. The scale of the pieces was really impressive too, with some over six feet wide. It was just a great experience being in the room with all this colour and light. It felt really joyful. 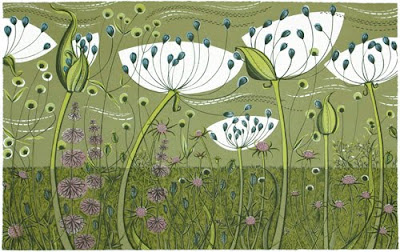 In the shop later I also browsed through a book on popular printmaker, Angie Lewin, whose relief woodcut prints (above) seems to be everywhere these days. I really like the strong, bold graphic use of line and pattern in her work, and it made me think I should do more in print with some of my own paintings of wild flowers. 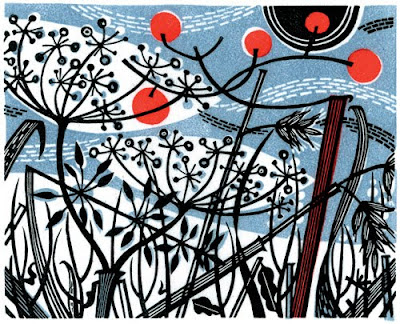 It was Keith Arnatt’s text pieces in the last blog, Angie Lewin’s prints in this one. One day I may find the time to follow some of these things through….
Posted by shaun morris at 19:12 No comments:

The Edges of Keith Arnatt 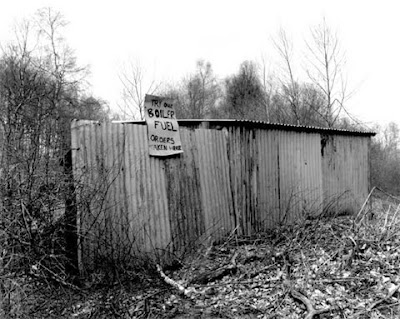 This ‘Edgelands’ book, which I blogged about in May, just gets better. I’m not sure my wife is convinced though when I tell her what a great chapter I’ve just read on ‘Containers’, or ‘Landfill’. She just looks at me with pity.

The chapter on ‘Landfill’ was particularly interesting, and led me to look up the art of photographer Keith Arnatt (above) who spent a lot of time photographing objects from his local tip and in landfill sites, as well as other ‘edgelands’ landscapes, in his home of Wales. The photos owe a lot to post-war documentary photography, which he was strongly influenced by, and also still life photography and painting in these colour photos of decomposing rubbish. He was apparently interested in the ‘conjunction between beauty and banality’. I like that phrase. I might nick it. I’m really warming to this edgelands theme. 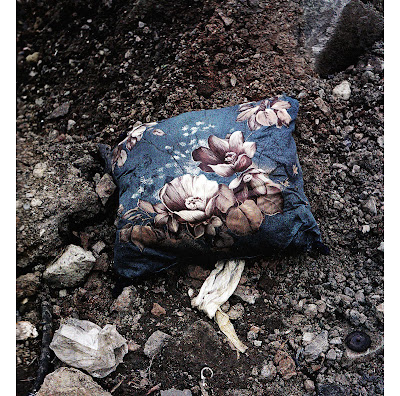 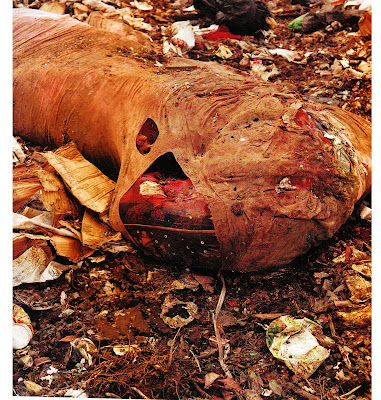 I was also deeply moved by Arnatt’s series ‘Notes From My Wife’. They are jottings and reminders written by his wife, Jo, in the early 90s. Soon after, she was struck down by a brain tumor and Arnatt nursed her until her death in 1996. He decided to collect the most poignant of the notes and photographed 18 of them. Taken out of context and blown up, they become surreal. Photographer Marin Parr has said that ‘this is Arnatt's strength as a photographer: he understood how the smallest detail or observation could be transformed by the act of isolation’. 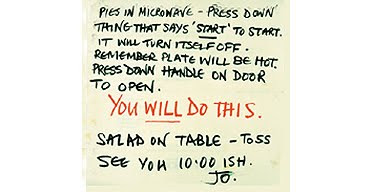 Most of my own favourite art, be it paintings or literature or music, reveals the poignancy and strength in the details. It is these things that, as painter Andrew Wyeth said, help to keep the art from being ‘round-shouldered’. I’ve got a few ideas for paintings based on bits of text and type that have been sat on the studio table for ages. This has inspired me to think more seriously about them… 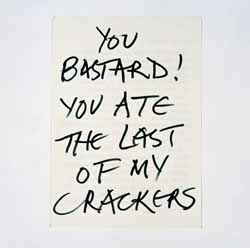 Posted by shaun morris at 21:39 No comments: 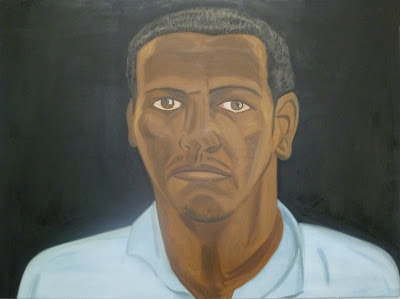 In the morning you face a blank canvas and five hours later you have created something entirely new that did not exist before. It seems sort of miraculous really, and I hope I never lose this sense of wonder that painting continues to offer me. So this is the painting that I have made of ‘Anwar’ from the drawing I posted on the blog in May. I’ve been avoiding portraits for ages, but have wanted to paint this one for some time. After the recent difficulties I’ve encountered in my painting, it felt nice to return to familiar ground. Not that it felt safe, more important to reconnect with some of the core values at the centre of my practise.

The reason I painted this portrait is that I’m entering it for an open competition at The Public in West Bromwich, with a couple of other portraits. If one of them gets selected I’ll be pleased and it would be one of the few opportunities I seem to get to exhibit the portrait work, as most commercial galleries just won’t consider them. I think most successful portrait painters get initially recognized through selection in open competitions. Success in these might encourage conservative galleries to take more of a risk with what they show.

I’m pleased with how I’ve handled Anwar’s skin tones and colour. I’ve been painting a much broader spectrum of people from different ethnic groups since my ‘Seek My Face’ project in 2008, and I’ve been surprised how neglected this area seems to be in portrait painting. It is very difficult to find more historical precedents in the European painting I’m most familiar with.

Like a lot of black skin, Anwar had more reflection in his face which I chose to leave out as it seemed to interfere with the direction and mood the painting seemed to lead me (the paintings do lead you most of the time, and you try and follow). You have to remember that the paintings are not an attempt to depict reality, but are my attempt to create something that has it’s own concrete reality in the world.

Posted by shaun morris at 14:31 No comments: