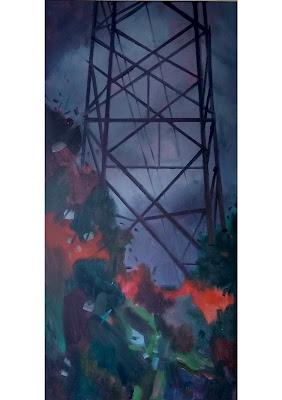 oil on canvas, 120 x 60cms, work on progress
I thought I would try and write today about some new work I’ve been making this week which I feel is the beginning of a more coherent series of new paintings after two quite experimental years of working and attempt to explain some of the context this work is developing out of.

The work in the last two years, but more especially in recent months, has felt a bit all over the place. The paintings I’ve made recently based on my lockdown walks and appreciation of the nature and the phenomenal spring we experienced in the early days of the pandemic, although I felt compelled to make some work based on this, after a few months I felt the work was hitting a fairly creative dead end.  I want to open up new paths that does include this new focus on nature but also reconcile with my ‘edgelands’ themed interests. I just haven’t quite known how... 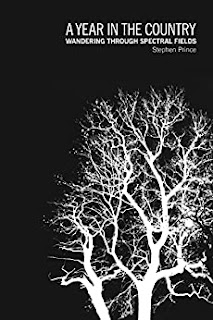 'A Year In The Country: Wandering Through Spectral Fields' by Stephen Prince

It’s not insignificant to discuss that bubbling away in my thinking whilst in the studio has been the stuff I’ve been reading, and watching, whilst in lockdown. Most notably the book ‘A Year In The Country: Wandering Through Spectral Fields: Journeys in Otherly Pastoralism, the Further Reaches of Folk and the Parallel Worlds of Hauntology’. by Stephen Prince, which has been a follow on read from Mark Fisher’s ‘The Weird and the Eerie’, with many overlapping themes discussed.

‘A Year In The Country’ is a collection of 52 incredibly well-researched chapters, one for each week of the year, that goes in search of the darker, eerier side of nature and the bucolic countryside dream by looking at films of a certain genre, books, TV series and music. It covers everything from folkloric film and literature to electronic music to acid folk to folk horror to the dystopian fiction of John Wyndham and the classic unearthings of Nigel Kneale, to the formation of underground record labels like Trunk, Ghost Box and Finders Keepers. It explores a vast range of avenues to bring together not only a sense of how far reaching and varied the origins, mainstays and current players of genres such as folk horror or hauntology can be, but crucially also how they intertwine and cross pollinate. Each chapter expertly charts its chosen subject’s impact upon the public consciousness as well as indicating that these artefacts are now part of a greater cultural cobweb that may well have threads and components that are radically different in genre or style but that equally have a strong commonality in their sense of unease and their haunted content. Further investigations delve into folklore, TV public information films and the landscape itself as a medium through which a certain mood, an uncanny, can be evoked. 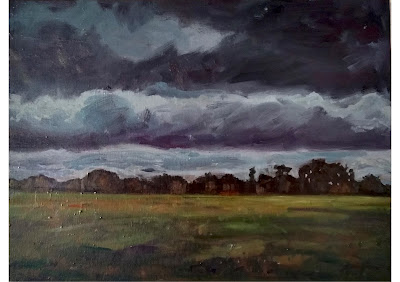 I think many of these qualities have often been implicit in my own work in landscape painting, although somewhat unconsciously on my part, but remarked upon by my artist friends Andrew Smith and Hugh Marwood, who I have collaborated with. This book  however, has been useful in helping me bring them into sharper focus in recent months to help things move forward. The book has inspired an enormous reading and watching list, and notebooks full of thoughts, and of books, films and TV I’m now trying to seek out. Typically, despite subscriptions to both Netflix, Amazon Prime and the BFI I can’t find hardly any of the films and TV I’m now keen to seek out (the BFI has some).

As mentioned, the lockdown walks found me wanting to seek a deeper connection with nature in my painting but still keep in my work a connection to my direct experience of living in the outskirts of town on the edge of an estate. Many of my recent paintings before lockdown have tried to evoke an interest in a darker, sometimes uncanny, sense of existence that can live parallel alongside the seemingly ordinary and mundane. They also hold many of my own anxieties about being a parent to a particularly vulnerable child and trying to keep him safe as he grows up and seeks his independence in this environment. 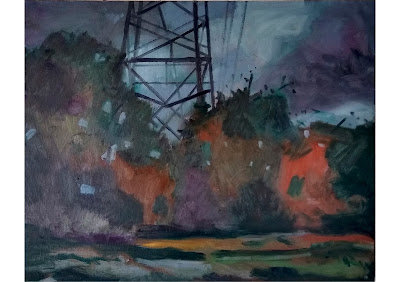 oil on canvas, 50 x 60cms, work in progress
I have also been thinking about the teenage memories I carry of the ordinary nature I experienced around me growing up on a council estate in the West Midlands. Our house backed onto a field, which I crossed to secondary school every day, but also crossed in the dark on the way home from the pub or a friend’s house, where it did not feel safe and even foolish to do so. I often did this on canal towpaths too or under the by-way beneath the M5 motorway where I often walked to my friends to rehearse with our band, also crossing a rather dangerous railway line. These places didn’t feel that safe in the day either though. You would often encounter groups of older lads there and suddenly feel very exposed and vulnerable in that field or down that track on your own, the estate where you lived just five minutes away, in sight, but yet feeling suddenly out of reach. I often found myself ‘legging it’ to home, but also on occasion being surrounded by a gang and being roughed up and shoved about, called names and forced to give up anything you might have (which in those days wasn’t much, but these days the technology on our pockets makes us more vulnerable). This sort of experience, in these sorts of places, is really well evoked in Shane Meadows’ film ‘Dead Man’s Shoes’ from 2004, which I mentally hold as some sort of marker in my thinking about the landscape and some of these memories. 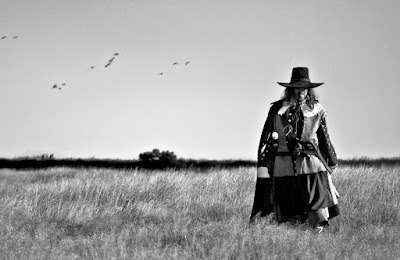 still from 'A Field In England', directed by Ben Wheatley

The films of director Ben Wheatley are discussed in ‘A Year In The Country’, in particular ‘A Field In England’ set entirely in a field during a day in the English Civil War, which led me to buy and watch it recently. The story deals with a group of army deserters who ‘after ingesting some magic mushrooms fall victim to the powerful psychic energies of the mystical field’. I liked it a lot, not least the beautiful black and white cinematography, but also it explores an idea of the field being like a stage, with many buried past histories and occurrences, where the whole story that unfolds takes place.  I can also see a link to Sergei Tarkovsky’s eerie sci-fi film, ‘Stalker’, which is also discussed by both Fisher and Prince and which I have also recently watched. The film depicts a journey through an enigmatic post-apocalyptic landscape, where hired guide—the Stalker—leads a writer and a professor into the heart of the Zone, the restricted site of a long-ago disaster, apparently a landing by an alien spaceship, where the three men eventually travel to the Room, a place rumored to fulfill one’s most deeply held desires. The film is an adaptation of a science-fiction novel by Russian authors Arkady and Boris Strugatsky, ‘Roadside Picnic’, which I also recently finished reading. I’m also now reading ‘Zona’ by Geoff Dyer, a very funny and engaging book about the film, examined scene by scene with lots of interesting digressions, and the author’s obsession with it, to complete my experience of it. 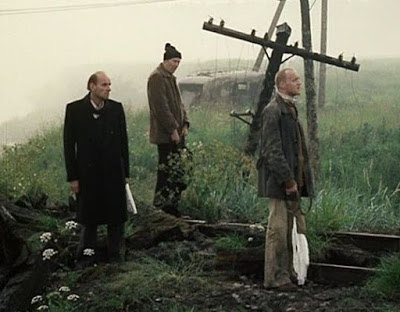 All of which sort of leads me to these new paintings. Here we are, alone and exposed in an open muddy field occupied by large ominous looking pylons on the edge of a nearby housing estate. The day is turning to dusk, seeking to evoke some of those anxious feelings of being trapped in a place, a zone, surrounded by dark trees as autumn fades to winter, home just in sight but still far away, trying to beat the clock and get home before night descends… 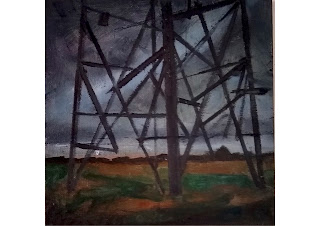 I’m developing the paintings using some reference photographs my photographer friend, Laura took on a trip we made to this sight, which is how I’ve often developed earlier series of work based on motorways and canals. The paintings I’m sharing here aren’t quite complete-I would like to add more highlights on the pylons-but are not that far off. It feels really exciting to be working on a series of works again though and the subject matter is helping me push the language of my painting into newer territories that I’m really enjoying too. Most importantly it seems to be helping to coalesce all these ideas, experiences and influences of recent months into a more tangible form…

Posted by shaun morris at 15:02 No comments: