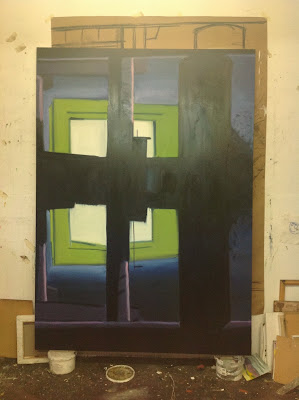 Some time ago I mentioned an exhibition in Nottingham centred around the ‘edgelands’ theme that I had been invited to participate in. The exhibition is being curated by Sian Stammers, a Nottingham based photographer, and during the summer she visited my studio in Birmingham to view my work first-hand, and confirm my commitment after discussing the intentions of the project. I really enjoyed meeting Sian, who was very funny, passionate and wise, and we talked at length, discovering many shared values in art and politics. We also discussed the idea of collaborating with some writers/poets, which I’m pleased to say has led to an invite being extended to my artist/writer friend Andrew Smith to contribute, after Sian read the writing he had contributed to the ‘If A Picture Paints A Thousand Words…’ exhibition ‘catalogue’. Andrew has started a blog as a platform for his writing, under his pseudonym of H R Smoke, which I’m really enjoying and would like to recommend via the link at the bottom of this post. This is a photo by Andrew from it: 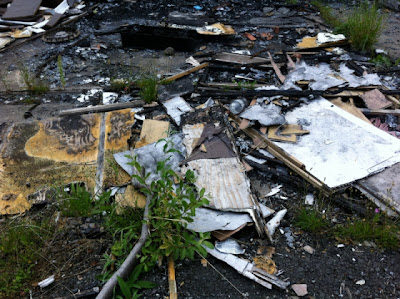 Last weekend Andy and I met Sian at the BoHunk Institute in Nottingham, to view the venue, and discuss further the plans for the exhibition. The show will open with a Private View on Friday 18th October, and will run for two weeks. The Institute is a great artist-lead space near the centre of the city, run by Allan, a very cool guy with his fingers in lots of pies in lots of places. It was fascinating hearing Sian and Allan discussing with great passion and interest the local East Midlands landscape. There are plans to have a writing workshop, readings and other gallery talks, and the other artists, working in largely photography, but also digital media and in collaboration with writers, sound very exciting too. I just wish I could remember their full names for the purpose of this post! The private view should be a great event. I can’t wait, and feel it hopefully could be a great opportunity to make new contacts and get my work more widely noticed…

Posted by shaun morris at 21:51 No comments: 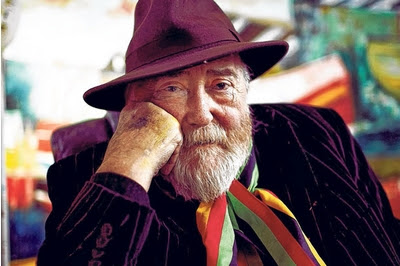 Over the last few days I’ve been reading online the tributes and obituaries to John Bellany, the Scottish painter who died last week aged 71. I didn’t actually find out about his death until Saturday when I was stood in front of a particularly marvelous large early painting by Bellany at ‘Aquatopia’, the rather unfortunately named, but quite good exhibition at Nottingham Contemporary with a friend who mentioned it. 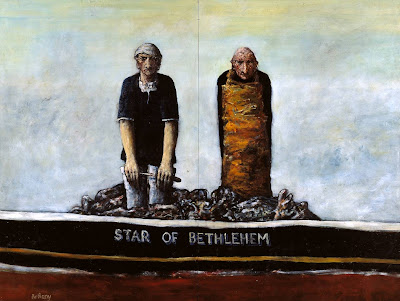 I was initially a bit shocked, but then not entirely surprised as he had a formidable reputation for living life to the full, especially when it came to the demon drink, which had taken it’s toll on his health. This can be seen with his need for a liver transplant in his forties and suffering three heart attacks, one on the way to a major retrospective of his work in Glasgow in 2005. Indeed, thinking about it, I was not even sure if he was still alive, having lost touch with his work in the last ten years having previously been a fan. You would be hard pressed to find a more passionate painter in modern times, and fittingly he died with a paintbrush in his hand. 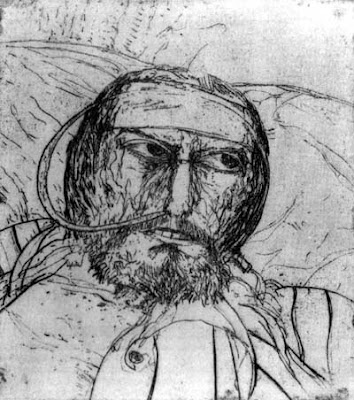 I used to live in Bellany’s native Edinburgh (he was actually born and raised in Port Seton, about ten miles from the Scottish capital), and saw his work everywhere in the local galleries, and even hanging in the living room of notorious reformed Barlinnie hard man Jimmy Boyle, whose house I used to pass on the way to the sea. I furtively and enviously looked across to the view in the window where a large colourful Bellany painting hung on the wall. My fellow artists in the studio I worked with used to gently mock his work, but I always admired it and learned a great deal about figurative painting and composition from him. I think my artist friends, who were largely Edinburgh born and had studied at the College of Art, were just understandably tired of his work everywhere and the ‘legend’ of the man in the city.  My friend Donald, thought those self portraits in his hospital bed after his liver transplant were hilarious: ‘just too much, give it a rest,big man’. But I think they are great, and love their brutal honesty. They are in the great European tradition of artists such as Goya, Munch and Beckmann, some of my other favourite painters. 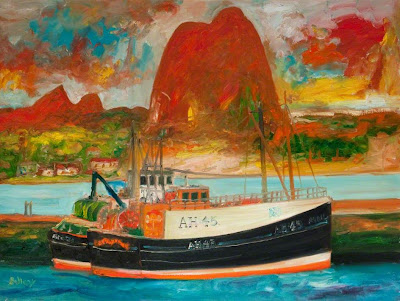 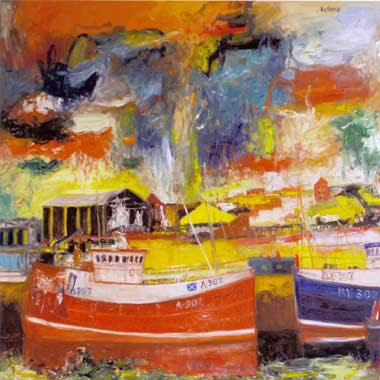 I’ve really enjoyed looking at his recent paintings in the last few days: they are largely scenes of Port Seton harbor in the most magnificent colour, a real return to form after a few years where I thought things were looking repetitive and over mannered. My favourite paintings though are the ones created in his destructive, alcoholic days, which are chaotic, everything teetering at the point of collapse. The frenetic handling of paint disturbingly captures the artist’s inner mental turmoil. 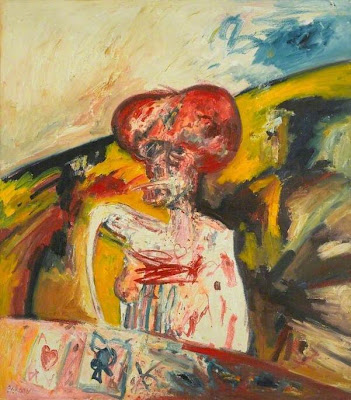 As that other great Scottish painter, Alan Davie said of him, at his best John Bellany was a painter of ‘true and powerful Nordic power’.