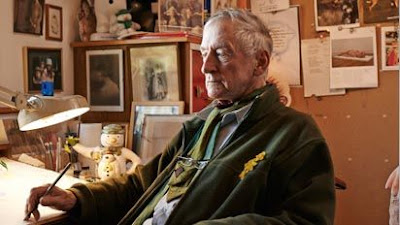 Raymond Briggs
I was fascinated and very moved by the recent BBC documentary on writer and artist Raymond Briggs’s life and work. Like many, I am more familiar with stories, and the subsequent accompanying animated films, such as ‘The Snowman’ and, my favourite Christmas movie, ‘Father Christmas’. I am aware of others, such as ‘When The Wind Blows’ and ‘Ethel and Ernest’, but have not read either or seen any of the films, so when the documentary focussed at some length on these pieces I found myself absolutely gripped, moved and even horrified at the details of the former story of the disturbing effects of the aftermath of nuclear war on an elderly couple, in equal measure. 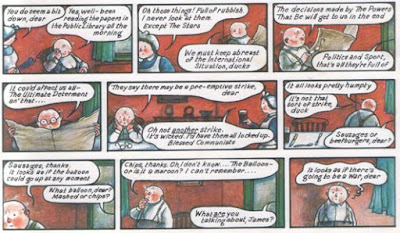 extract from 'When The Wind Blows' by Raymond Briggs 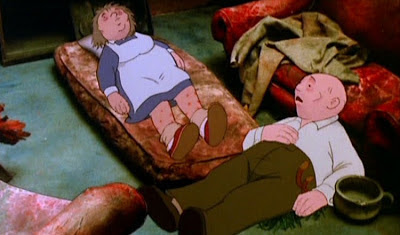 still from the animated movie of 'When The Wind Blows'
Growing up myself in the shadow of the Cold War during the 70’s and 80’s, and the ever present threat of nuclear war as represented in Government information and films I was reminded of what a bleak era this was. Indeed, I remember having to sit through a Government film about what would happen in the event of a nuclear war whilst at school. Things were that bad (and sadly are again). So Briggs’s piece was a stark reminder for me of that time, but also struck me as an incredibly powerful piece about these realities told, with its focus on the deteriorating condition of the character’s lives post-nuclear war, through a lens of trying to continue with the banal and mundane everyday tasks we all do each day as they and the world they have known dies around them… 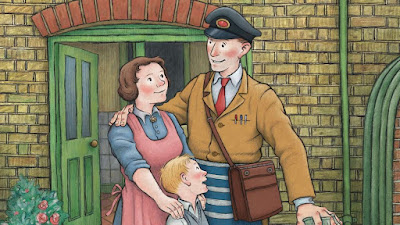 'Ethel and Ernest' by Raymond Briggs
‘Ethel and Ernest’ depicts the life of Briggs’s own parents: their marriage, family life, their trials and tribulations and Briggs’s own relationship with them as they all grow older. It seemed almost unbearably poignant and painful at times, and I was struck by Briggs’s bravery if you will of writing and illustrating such a deeply personal story and the effect that must have had on him, yet the need he must have felt to tell the story, which, although personal, had strong universal qualities.

What an artist, I was left thinking after the film. He is someone who not only has created these deeply wonderful books, but has really put himself out there to do so, taking great risks. When you see so many poorly conceived, self- serving exhibitions and artworks out there, that seem to only attempt to speak to a tiny coterie of people that is the audience, an artist like Raymond Briggs can’t help but remind you of what the real deal is. As I say, what an artist.

Here’s a link to the film on BBC player. You should watch it: https://www.bbc.co.uk/iplayer/episode/b0bwdvth/raymond-briggs-snowmen-bogeymen-milkmen

Posted by shaun morris at 21:57 No comments: