Paper and Scissors and Glue 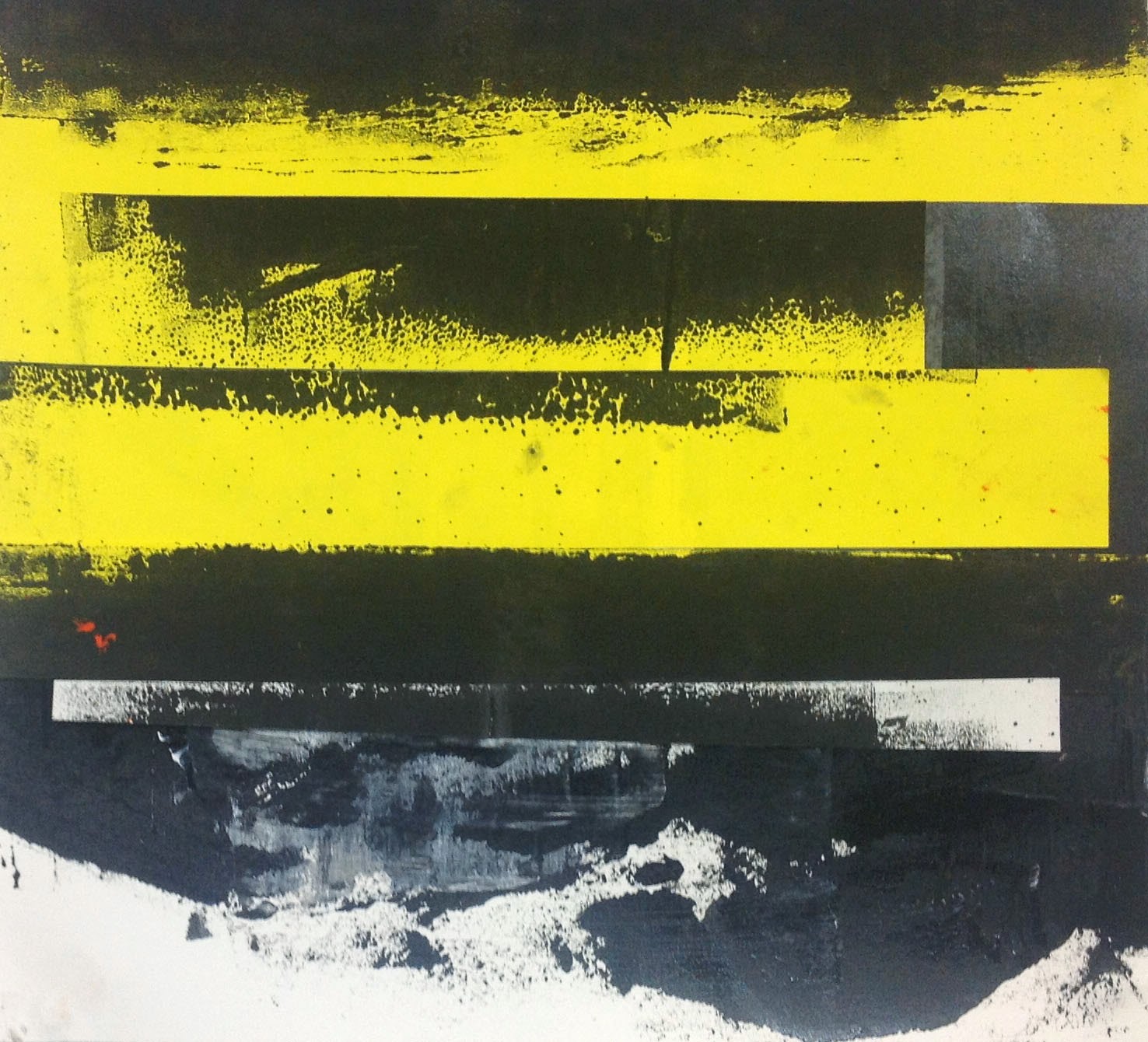 Collage, 15 x 20cms
At work I collect all the off-cut strips from the student’s paintings and prints trimmed off on the guillotine. I like the seemingly random marks and textures left behind, and scoop them up and throw them in a box, and occasionally encourage the students to use them in collage or by working on top of them. Lately, I’ve made a few collages myself from these, inspired by some sketchbook drawings I’ve been working on of factories overlooking the canal. 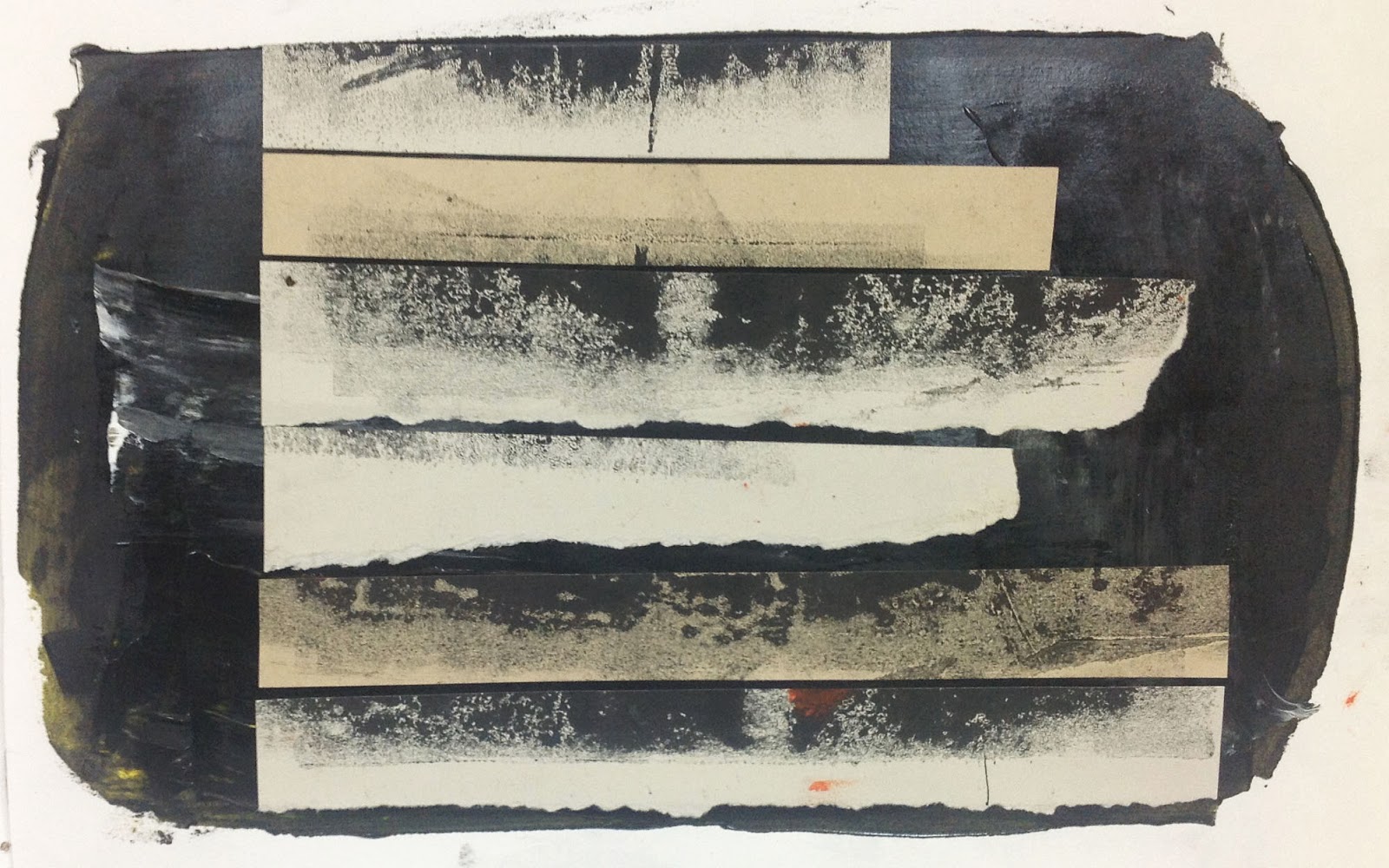 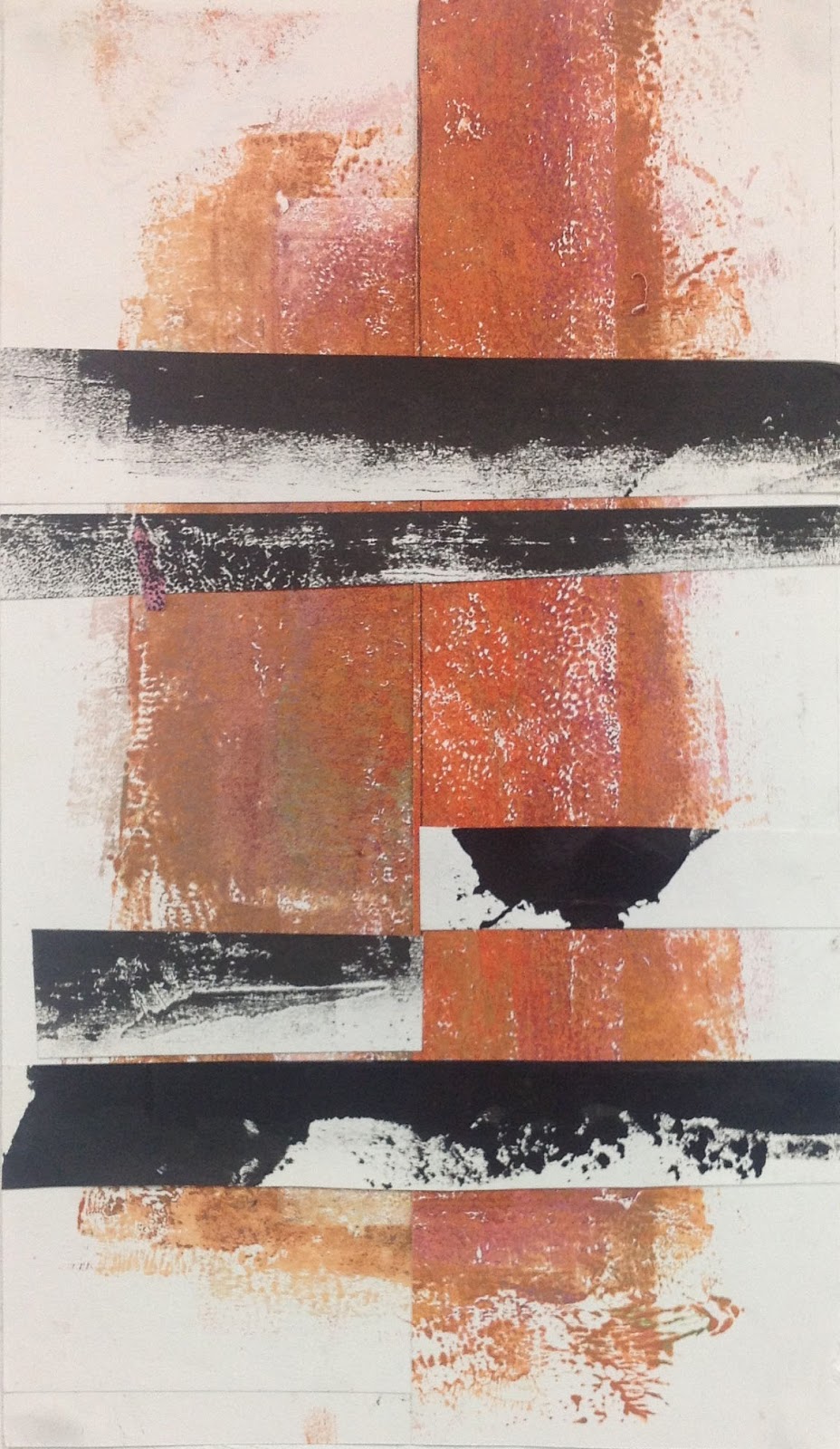 Collage, 27 x 15cms
The collaged strips of paper are generating some interesting ideas about representing some of the factories structural forms in a slightly more imaginative way.
Posted by shaun morris at 19:57 1 comment: 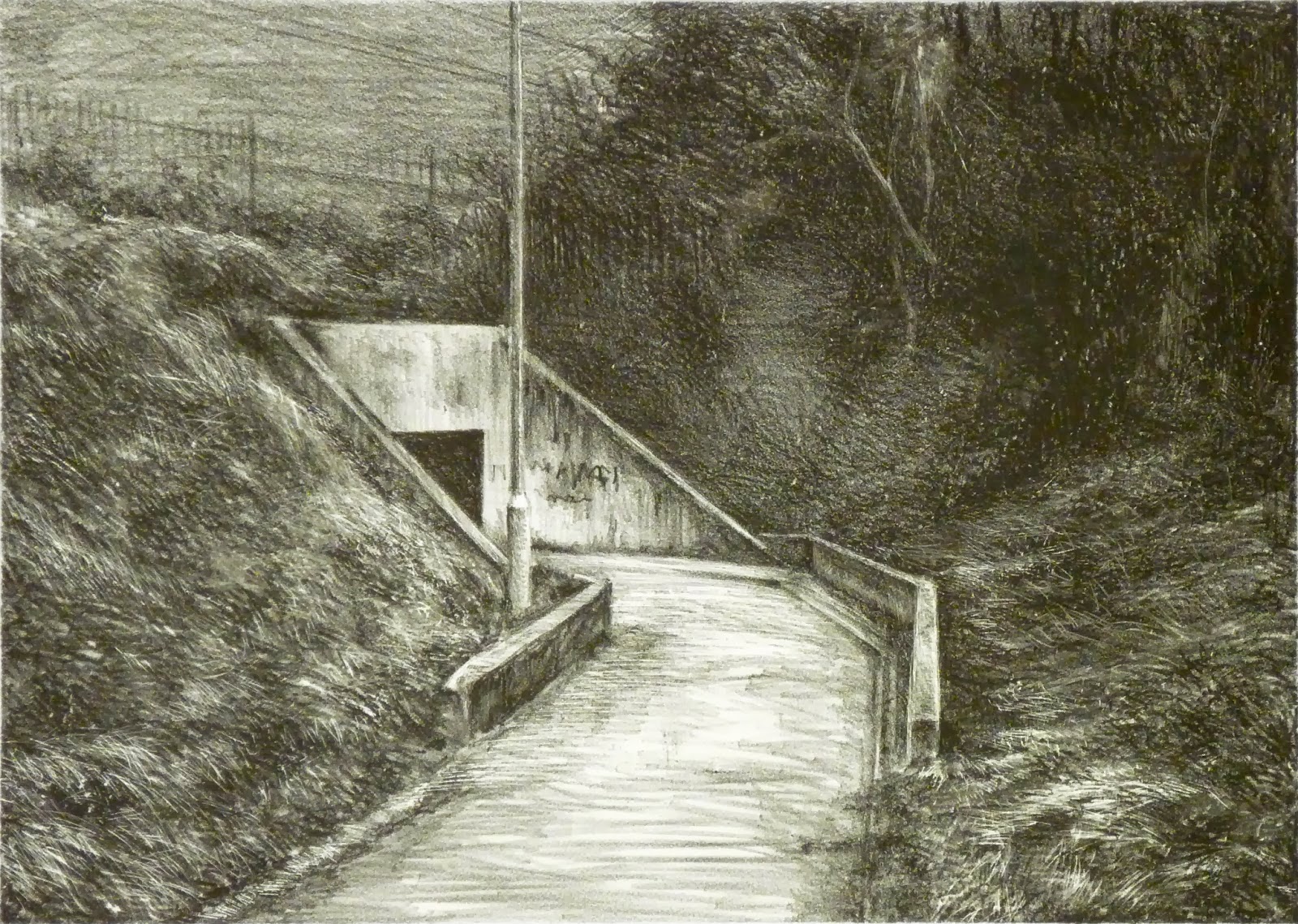 
These are two paintings I made of Philip from the same drawing I made of him in the old office at the College. The paintings were made about three years apart, and I’ve always been pleased with them.

Posted by shaun morris at 22:15 No comments: 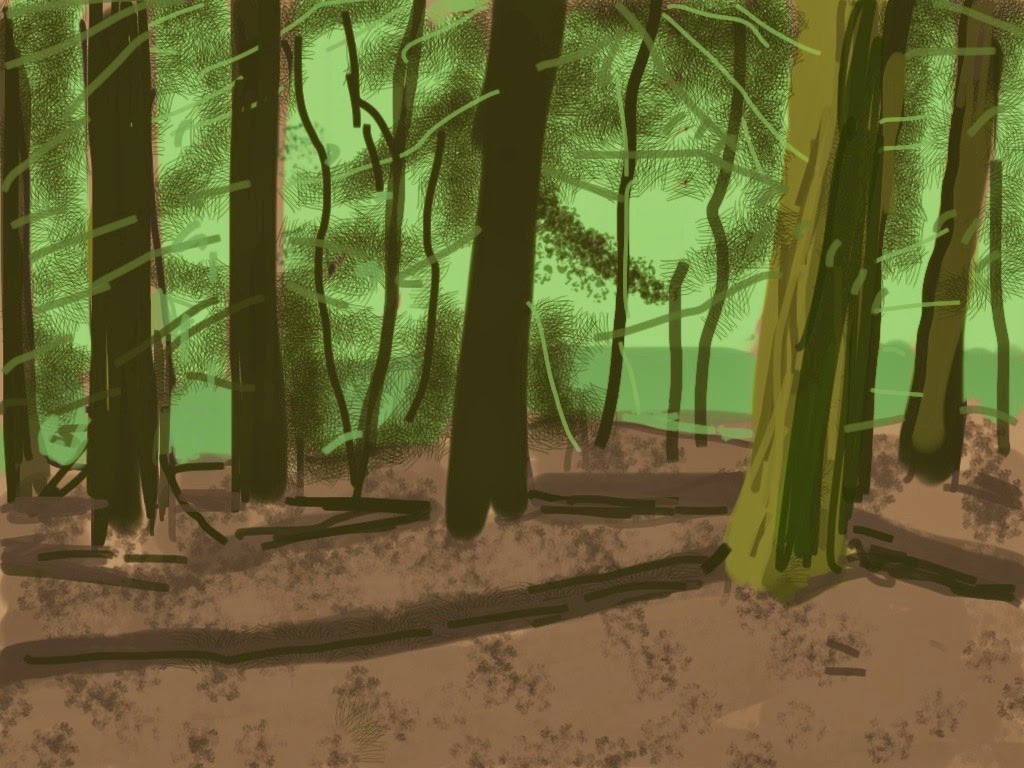 It’s been just over a week since ‘Black Highway’ ended, and I took the paintings down on the stormy afternoon that was last Sunday. (As soon as the gallery closed, screwdrivers were out, and the paintings were quickly taken off the walls, and taken into my waiting van). And last week I completed my final evaluative report to Arts Council England on the work I have been doing with the help of their funding over the last two years. The funding period is now completed, and the report is a condition of the release of my last payment. 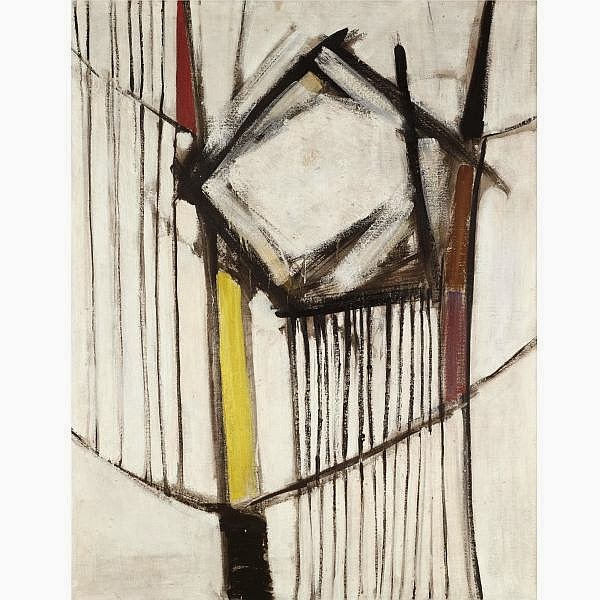 It’s 30 years this year since the release of ‘This Is Spinal Tap’, and there seems to be a few things in the papers celebrating this groundbreaking  (in the words of Marty Di Bergi) “documentary or, if you will, ‘rockumentary’”, or (in my words) mockumentary of the documentary form. It’s one of my favourite films, despite not having watched it for a while now, but I don’t really need to, as during my twenties I found myself watching it endlessly. I must have almost bizarrely watched it over 40 times, more than any other film I’ve seen, captivated by it’s affectionately hilarious look at big label British Rock Bands and Heavy Metal, and the incredibly detailed and accurate observations in the completely improvised script, by the extremely talented performers and writers, Christopher Guest, Michael McKean, and Harry Shearer. 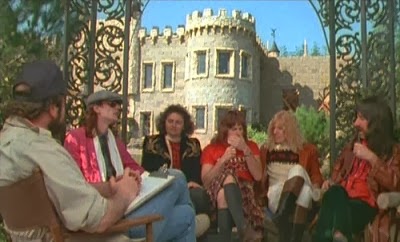 They also wrote and performed all the songs themselves, most of them far more tuneful and better made than the records they were a parody of, which include their own take on sixties folk, psychedelia, prog rock, and the heavier rock of the band’s declining Eighties years. Again, the authentic detail in the recreations of the band’s early days (as first The Originals, which they had to change their name from as there was already a band called The Originals, so they became The New Originals. But then The Originals changed their name, so the band then became The Thamesmen) is really cleverly done. The Tap’s songs include the mighty ‘Big Bottoms’, ‘Sex Farm’, ‘Stonehenge’, ‘Warmer Than Hell’ and many others, featured on classic albums such as ‘Shark Sandwich’ (hilariously reviewed in two words as ‘Shit Sandwich’), ‘Bent For The Rent’, ‘Intravenos De Milo’, and of course the legendary ‘Smell The Glove’, in it’s ‘none more black’ sleeve, all mixed in ‘dobly’ sound of course. 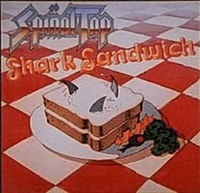 I’ve spent many an afternoon quoting scenes from it with my equally obsessed late brother, Stu, and I still can easily bring scenes and words to mind from the brilliant set pieces which  stitch the narrative together, as the band embark on an ill-fated American tour to promote their new album. We follow them playing to ever diminishing crowds, empty record store signings, and finally ending up becoming second billing to a Puppet Show at a Theme Park. It’s both hilarious and cringe inducing, and the pretentious conversations and scenes would be recognizable to anyone who has been in a band at whatever level. It certainly was to me as someone who just played in garage bands in my late teens and early twenties. Rock bands would never be seen in the same way after it, and many have struggled to carry on apparently, such is the accuracy of the rather sad life and characters it depicts. Surfing the net about it I found some interesting stories about the impact it has had on many bands and musicians who have seen it over the years. I've cut and pasted a few stories below...and added a few bits to it myself. 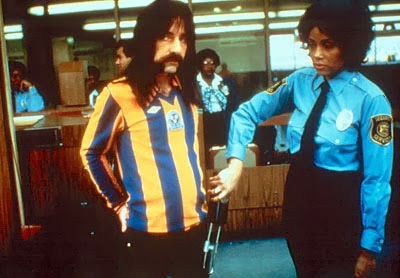 For example, the movie cut close to home for musicians such as Jimmy Page, Robert Plant, Jerry Cantrell, Dee Snider and Ozzy Osbourne, who  all reported that, like Spinal Tap, they had become lost in confusing arena backstage hallways trying to make their way to the stage! (Hello Cleveland!).  Singer Tom Waits claimed he cried upon viewing it, and Eddie Van Halen has said that when he first saw the film, everyone else in the room with him laughed as he failed to see the humour. "Everything in that movie had happened to me," Van Halen said. When Dokken's George Lynch saw the movie he is said to have exclaimed, "That's us! How'd they make a movie about us?" Glenn Danzig had a similar reaction when comparing Spinal Tap to his former band The Misfits saying, "When I first saw Spinal Tap, I was like, 'Hey, this is my old band.'

In 1982 a young music fan went to a record store signing where Randy Rhoads, Ozzy Osbourne and Rudy Sarzo were sat behind a desk. "I went to a record store in Manhattan where Ozzy, Rudy & Randy were doing an album signing. It was right out of Spinal Tap. Those three, a store clerk, myself and a couple of friends were the only people in the store. They were waiting for someone to come into the store for the signing and no one, not one with no other customer beside us. Needless to say, I took full advantage, ended up getting to speak for over thirty minutes as no one came in.’ (What would Artie Fufkin, ‘of Polymer Records’, say?)

Lars Ulrich told a press conference crowd that the Metallica/Guns N' Roses 1992 tour seemed "so Spinal Tap." This tour was in support of Metallica's own "black album". Shortly after the tour started, Metallica's James Hetfield suffered third degree burns on his arms after he stood too close to a pyrotechnic device. Earlier in that tour, backstage at the Freddie Mercury Tribute Show, Metallica met with Spinal Tap and discussed how their "black album" was a homage to Spinal Tap's Smell the Glove. This was captured on the Metallica DVD A Year and a Half in the Life of Metallica. 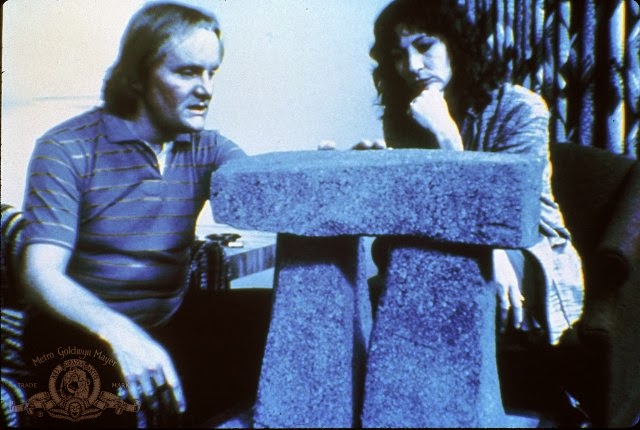 According to a 1997 interview in Spin magazine with Aerosmith rhythm guitarist Brad Whitford, "The first time Steven Tyler saw it he also didn't see any humour in it." When the movie was released, Aerosmith's most recent album, Rock in a Hard Place, depicted Stonehenge prominently on the cover.  Hopefully, the Stonehenge monument was bigger than the band, or at least not in danger of being crushed by dancing dwarves.

It became a common insult for a pretentious band to be told they were funnier than Spinal Tap. As George Lynch put it, the more seriously a band took themselves, the more they resembled Spinal Tap. After seeing a 1986 performance by British metal band Venom, singer Henry Rollins compared them to Spinal Tap. In their respective Behind the Music episodes, Quiet Riot's Rudy Sarzo and Ratt's Robbin Crosby compared their own bands to Spinal Tap to. For example, as a parallel to the "Shit Sandwich" incident, Quiet Riot's fourth album Condition Critical was given the two-word review of "Condition Terminal" in Musician magazine. His review of the short-lived band GTR's eponymous debut LP in the same magazine was "SHT." R.E.M.'s Mike Mills described early tours as "very Spinal Tap", citing, among other things, the fact that they had indeed played at a United States Air Force base. According to Harry Shearer in the DVD commentary, keyboard player John Sinclair had just returned from touring with Uriah Heep when principal photography was about to begin, and told them how they had been booked to play an air force base. They subsequently used the story in the film. 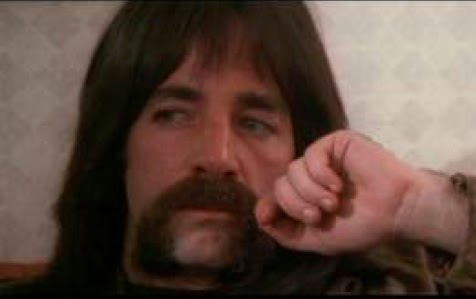 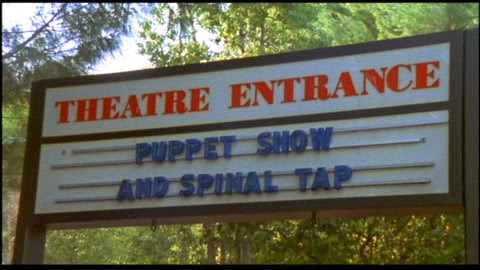 I can also link my obsession with Spinal Tap to painting too, in case you are wondering, as in 1998 I made two very large paintings that featured members of the band, Nigel Tufnal, David St Hubbins (St Hubbins being apparently the patron saint of quality footwear), Derek Smalls (the ‘lukewarm water’ between the ‘fire and ice’ of Tufnal and St Hubbins), keyboardist Viv and the cursed Mick, who would be in a long line of unlucky deceased drummers who have suffered fates such as spontaneously combusting on stage, choking on someone’s else’s vomit, and a ‘bizarre gardening accident’ (my favourite). I was trying to do something nostalgic about the Midlands (the home of Heavy Metal) and about men, and also move, unsuccessfully, away from the work I had been making at the time. I spent ages on the one called ‘Flying’, especially the carpet of leaves, which was taken from ‘Beatles For Sale’, and re-painting Derek’s face on the right about fifty times too. I’ve never exhibited them, which seems something of a shame when I look at them now. Those flashy pink spandex trousers were enjoyable to paint I seem to remember...but it would be the reflections in the toilet window where any new ideas would lie... 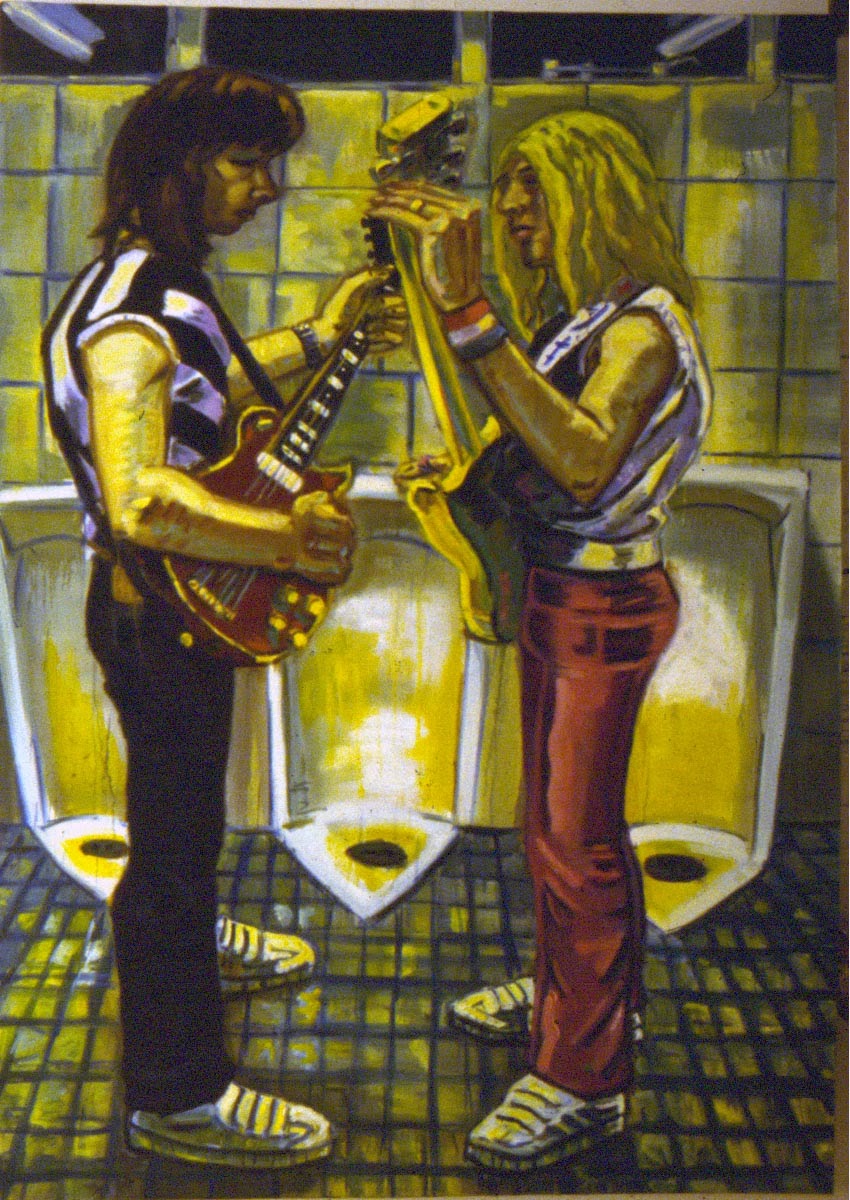 I’ve enjoyed writing this post, and calling it the above, after one of the Tap’s most notorious songs, might attract a few more readers to the blog (although I’m not sure they would be the readers I’m looking for!)