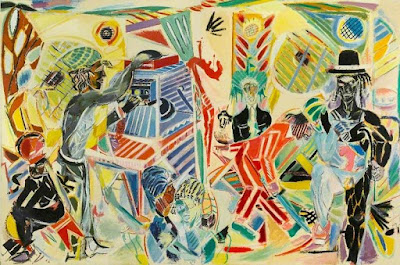 I saw some photos an artist friend recently posted on Facebook of her attendance at a Denzil Forrester exhibition in London, a painter I used to, and still do, admire a great deal but whose work I rarely see or hear of these days. Curious, I found myself looking Denzil and this exhibition up on the internet the following day at work and was delighted to see that Denzil seems to be enjoying some renewed and much belated critical acclaim and recognition for his work in an exhibition curated by none other than Peter Doig in a gallery, ‘Tramps’, that he runs in London. 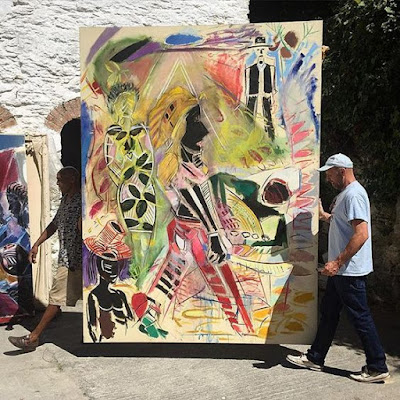 Artist Peter Doig and Denzil carrying one of Denzil's paintings at his home in Truro, Cornwall

Apparently Doig too has long been an admirer of Denzil’s paintings, and has been also been instrumental in introducing Forrester’s work to a New York audience with a forthcoming show at the White Columns gallery in that city, which is run by British curator Matthew Higgs, following a sell out show of Denzil’s drawings at Frieze New York. 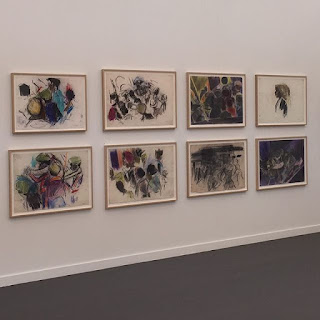 A selection of Denzil's nightclub drawings at NY Frieze. These drawings were all made on location in these clubs in the Seventies and Eighties
It’s great to see a painter so talented, yet overlooked, getting some much deserved recognition and success. I first came across Denzil’s paintings of London’s Blues and Dub clubs and British Black Caribbean street life when I was an undergraduate student at the University of Sunderland in 1990 when his touring exhibition, ‘Dub Transition’, came to Newcastle’s Laing Gallery. Forrester was a friend of our Head of Painting, Virginia Bodman from their days at the Royal College of Art together and he came to the Painting Department as a visiting tutor twice, giving the most amazing talk to students which contained a strong political and social dimension, to a packed out lecture theatre, and I had tutorials with him on both occasions about my paintings I was making at the time about the white, working class night life of West Yorkshire. 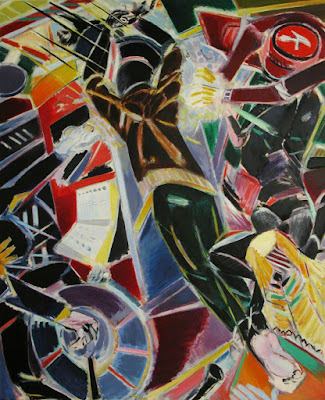 He became a big influence for a while on this work, especially his dynamic and very intelligent use of colour and the very sophisticated way he described space in his complex compositions, and I learned a lot from his work, but I did also feel a bit pushed in that direction by the tutor’s enthusiasm for his work, and it ended up being a bit more difficult to find my own language for my ideas. 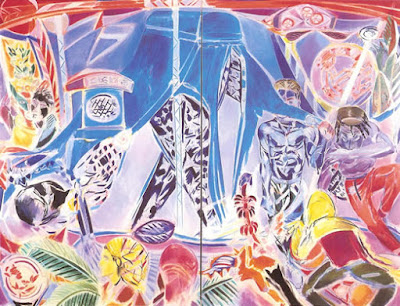 'Carnival Dub', oil on canvas, 240 x 300cms, 1983
Funny now that I know Doig is an admirer, how I can see Denzil’s influence in his own work inspired more by the tropical landscape of Trinidad, his adopted home, particularly in his own use of colour, but especially in his increasingly expressionist depiction of the figure. 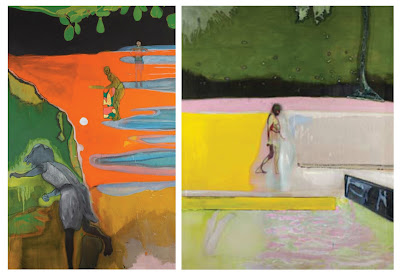 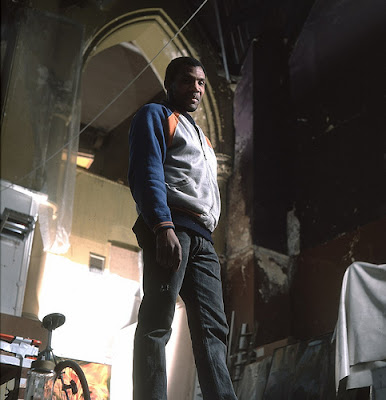 Denzil back in the Eighties
So, I love Denzil Forrester’s paintings, but the ones I know and have seen, and are currently on show at Tramps, were all painted in the Eighties: I can find no evidence of any paintings since….so what has he been doing all this time? He has said, I noticed, with his new found New York success he is giving up his teaching work to concentrate on painting full-time so I will eagerly await to see the results.