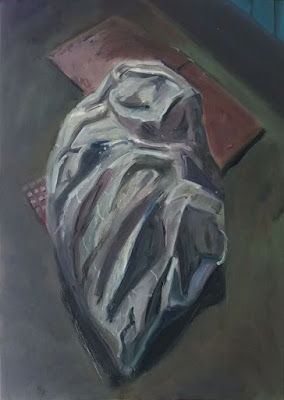 'The Street (Rags)', oil on canvas, 80 x 60cms, 2017
As we reach the end of the year I’ve been reflecting on how many new paintings I’ve created this year, much more than in the previous one. This has largely been because I worked on some very large paintings in 2016 and as a reaction to this rather labour intensive period of work, in the winter last year I started making many small paintings quite quickly in an attempt to open things up a bit. Strangely, it did indeed open things up but also in its own way as the year has progressed the paintings seemed to have become increasingly sort of narrow in their outlook. In five years I’ve gone from depicting large, expansive motorways, brooding trucks and transit depots to discarded paper bags, skips, abandoned cookers and other detritus found in the local streets where I live. It feels lately like I’m in danger of disappearing into my own navel. Things have just got a bit too downbeat, man. 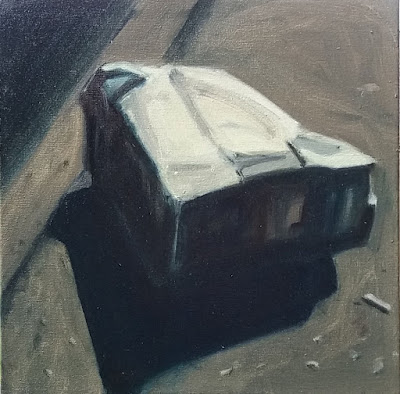 'The Street (Paper Bag)', oil on canvas, 60 x 60cms, 2017
But don’t get me wrong, this has also felt very ‘right’ to me too, for reasons that are also impossible to explain, and I’m not sure I would want to try. I’ve really enjoyed the work this year in a way that I haven’t for quite some time: I like working smaller and have experimented a lot with form, technique and language with varying degrees of success and leaving me with more questions than answers, but I do feel like I now need to look up from the pavement and seek out new territories as I move into 2018. So, I have a few more paintings planned in this vein- I’m currently enjoying working on some paintings of empty boxes(!)- in an attempt to make a more cohesive and stronger body of work in my ‘Negativland’ series, which I’m planning to exhibit next year, but after that I want to have a much needed re-think…
Posted by shaun morris at 14:51 No comments:

Hanging Out To Dry 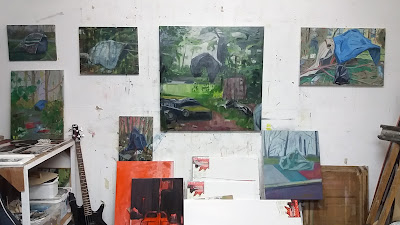 Studio View, Nov 2017
I finally completed, well I think I have completed but you never know, what will be the last of a small series based on homeless shelters situated next to my place of work. 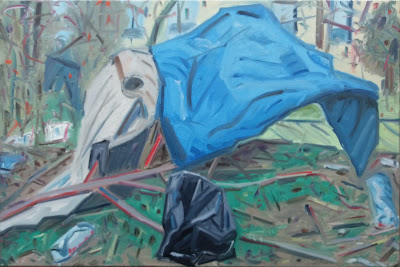 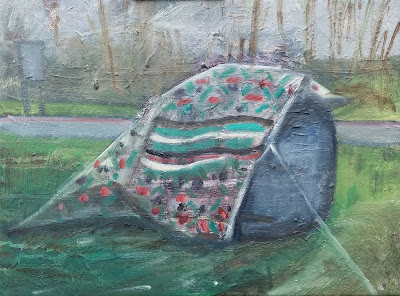 I say that these are shelters in the loosest sense of the word, being largely comprised of duvets and sleeping bags slung over branches, as well as a more robust tent, which now months on since I first spied this ‘camp’ is still there and doesn’t show any signs of moving just now. 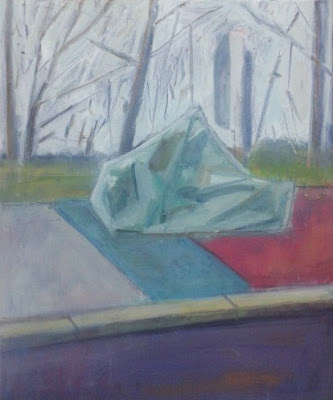 'Paper Boat', oil on canvas, 80 x 60cms, 2017
The strangest sight was a shelter made of a large green plastic sheet wrapped around some sort of a frame that had seemed almost blown onto the pavement. Trying to translate the experience of seeing this into paint was the biggest challenge. It looked like some sort of desperate paper boat floating adrift, which is what I have decided to title it. 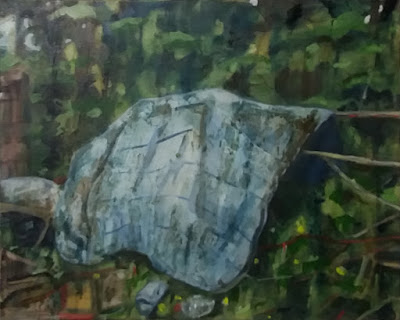 'A Home In England', oil on canvas, 40 x 60cms, 2017
I worked over this one above, having previously liked it, but then I felt it did not sit that well with the others and had not gone far enough. 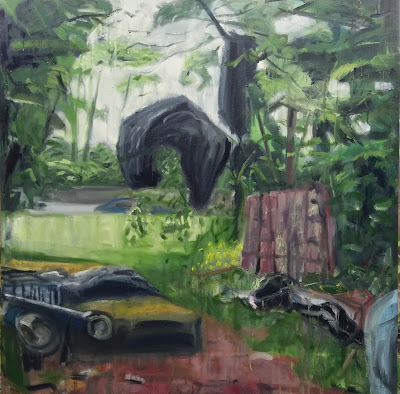 'Hung Out To Dry',oil on canvas, 100 x 100cms, 2017
This larger, final one, with bin bags like bodies or ‘strange fruit’ hanging from the trees above the dirty mattress, the roadside a few yards away, was difficult, and I’m not sure I quite nailed it, but I know I don’t know how to do any more on it either. I need to sit with it a while, having only finished it this week, but it does mark the completion of this series. In ways I find hard to put into words, I have found it quite an emotional series of paintings to work on.

Posted by shaun morris at 21:33 No comments: