The Blossom On The Trees 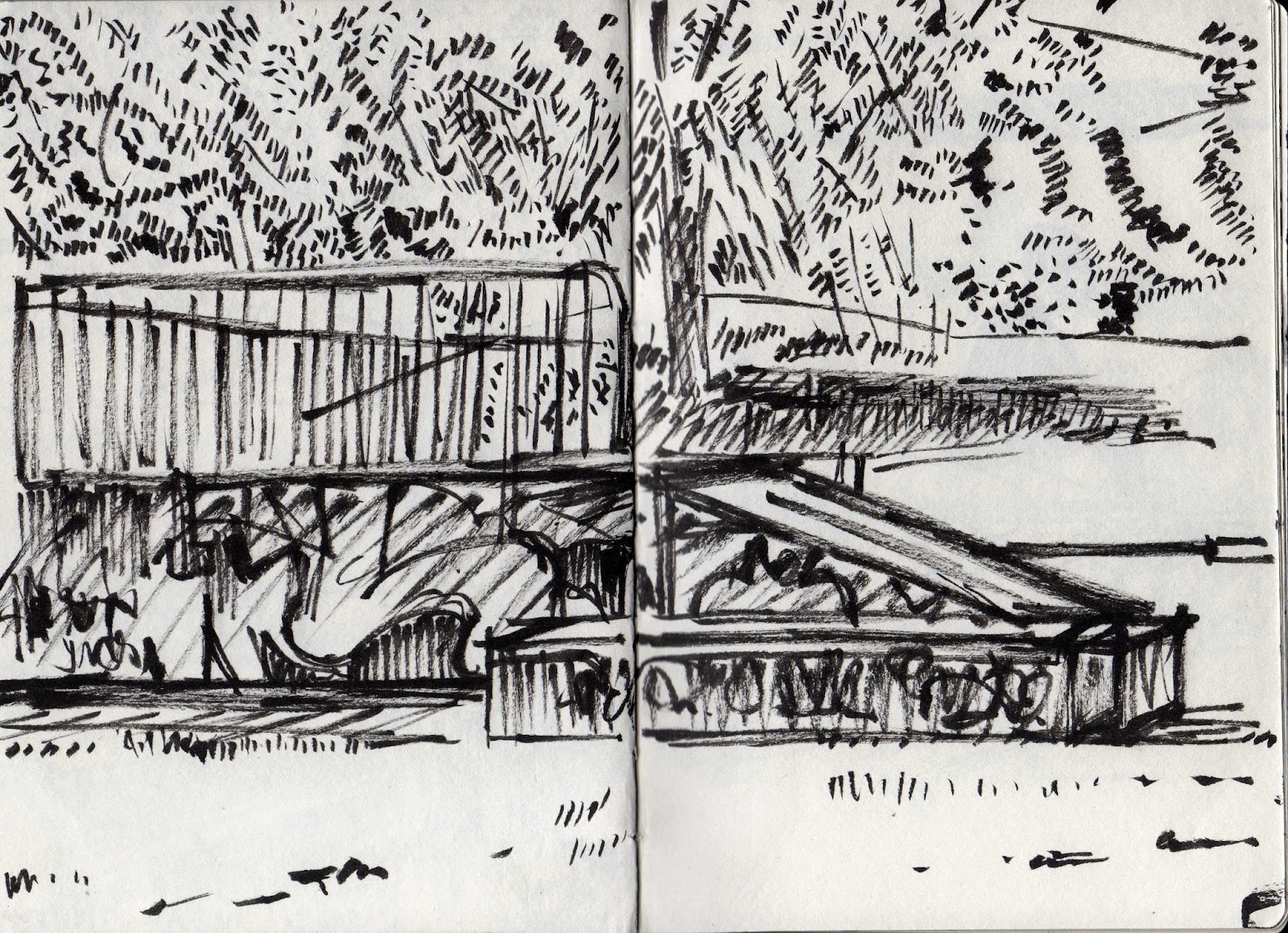 I got excited making these last night. They are an attempt to explore in paint my recent collages. I seemed to find my foot suddenly, and unexpectedly, nudged inside a door…

Posted by shaun morris at 19:24 No comments: 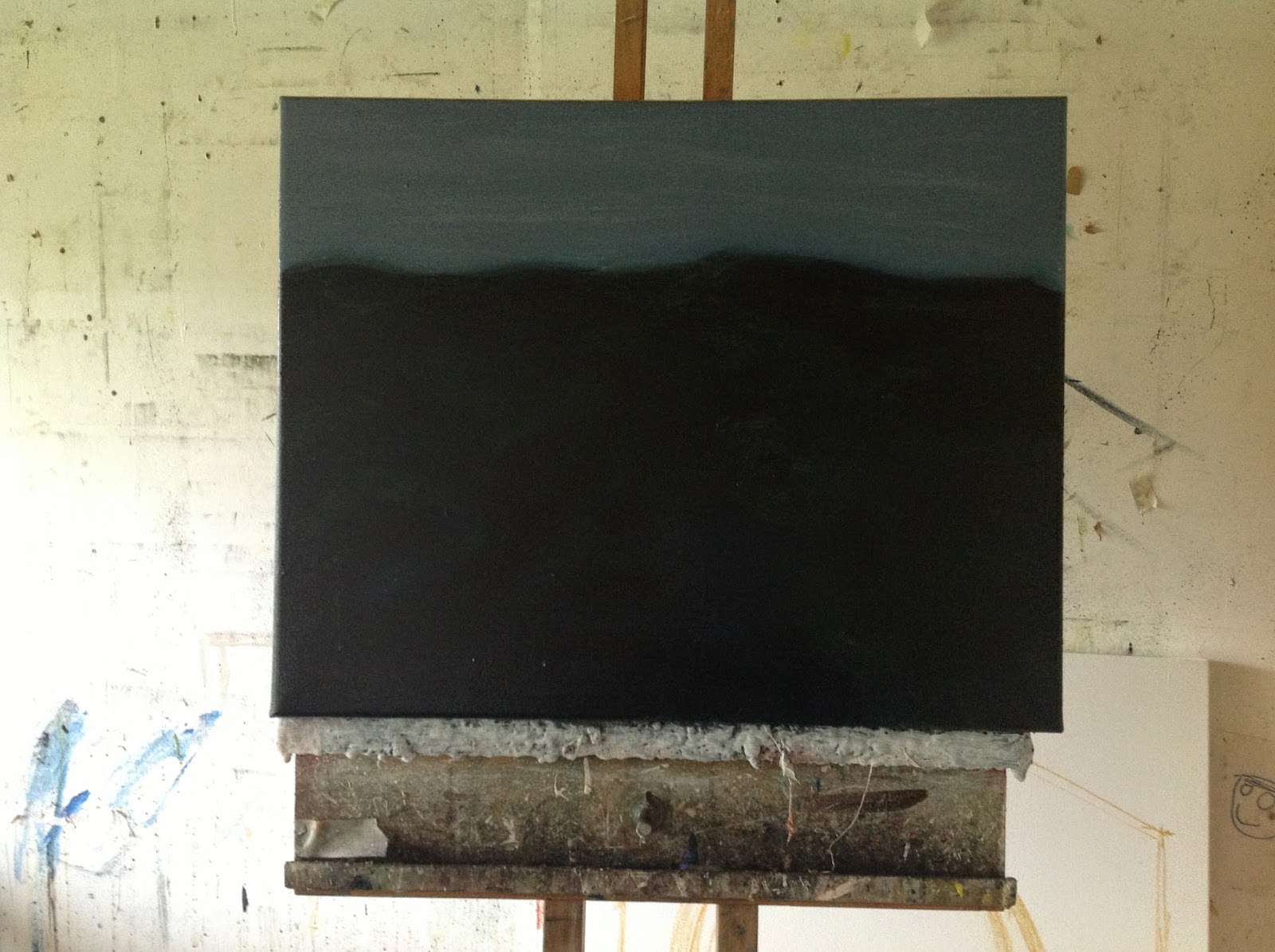 I completed this canvas with the paint left over from the painting in the previous post. It’s a view from heather covered hills leading up to the North Sea on the coast of Denmark. It’s my first painting of Scandinavia that I’m actually pleased with. The dark tones were quickly washed in in about ten minutes over a very colourful, and pretty dreadful, version of the scene on a canvas that had been sitting in the studio for over a year.  In simplifying it all it seemed to suddenly take shape and somehow speak to me. 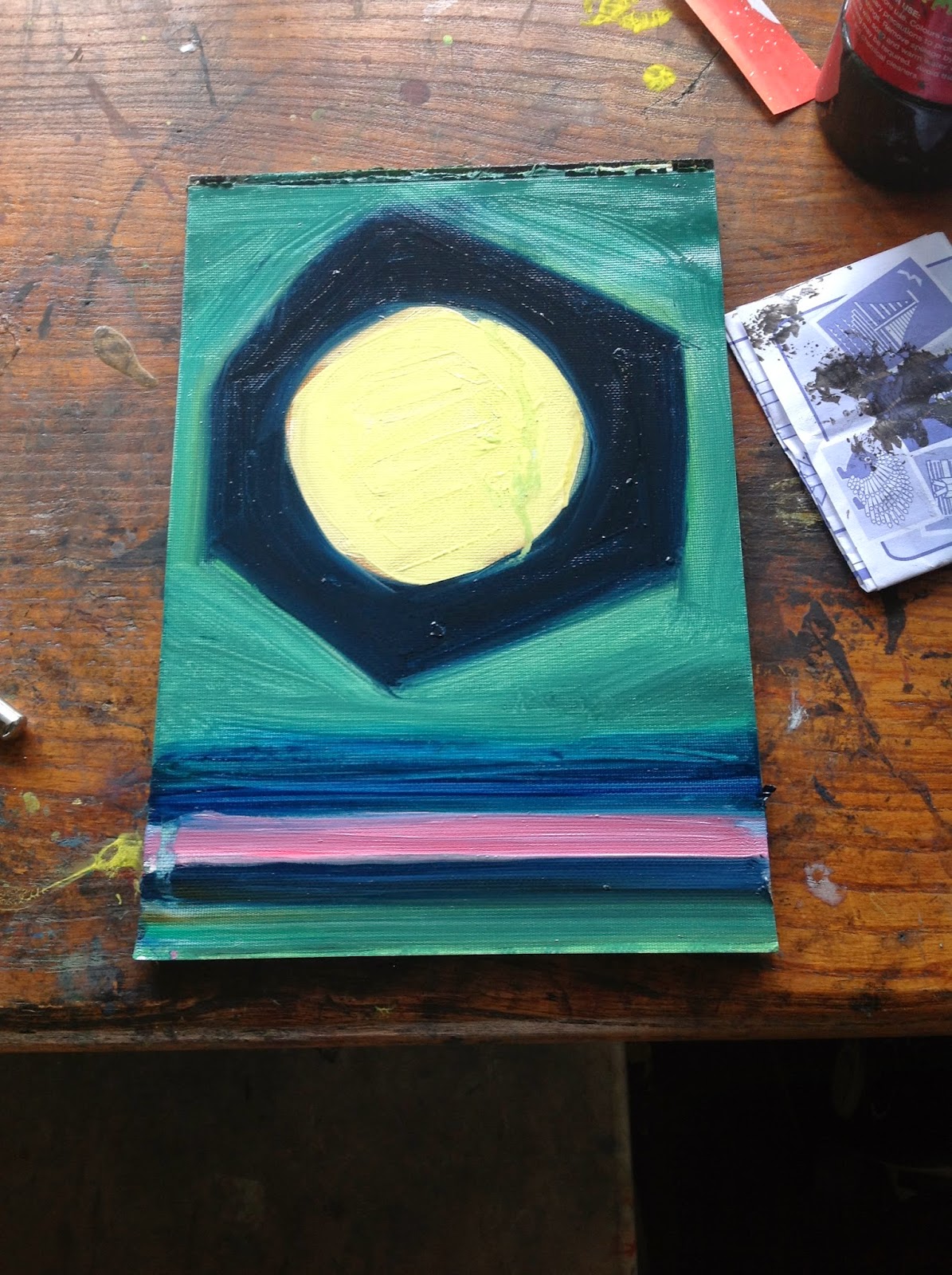 It’s very different from these other studies I’ve been working on in oil on paper, which are an attempt to develop further the language and ideas from the larger painting in the last post. I have a larger canvas stretched and ready to try it on a larger scale, but I’m not sure….these paintings almost seem like ‘Black Highway’ the Remix, although I quite like that idea.
I was out with my camera one of the evenings last week taking photographs of a large transport depot underneath the M5, which generated lots of new ideas.

Posted by shaun morris at 17:36 No comments: 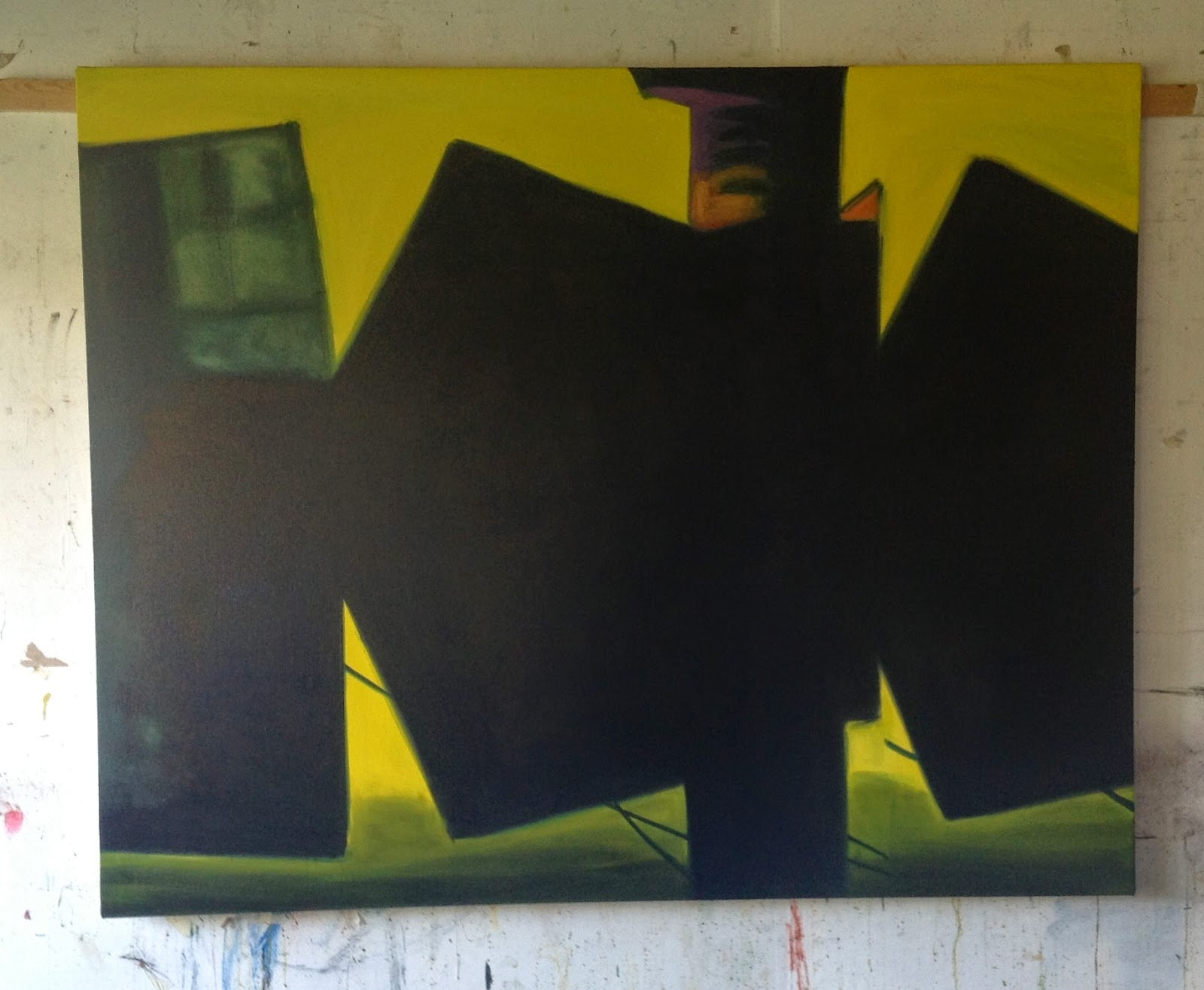 oil on canvas, 120 x 150cms, 2014
I made this large painting late into the night last Thursday, and felt knackered the next morning. It’s been a long term at work, and, like all my colleagues, I’m in need of a break. I finished it last night, refining and re-painting different parts.
(I feel like I am carrying my students work around inside my head so much lately, fretting about what they are doing.  Whereas, my vocational students work so much more independently and dynamically, as they become much more immersed in what should be an immersive subject.  I have never thought A level is any way to teach Art).
This is my first large oil painting this year, and with the use of the yellow background, it feels like a shift of sorts. I wanted to take a risk with the colour and see where it took me. I’m not sure where that is, if anywhere, but I can recognise a distillation of lots of things I’ve been looking at in painting this year.  From developing a small sketch in my sketchbook, I’ve had the painting in my head for a few months now, with various colour ideas explored using the i-pad, and lots of rumination about where to take it. It’s good to see it at last, and looking at it today it looks quite surprising, and it's one of the boldest things I’ve done in some time. 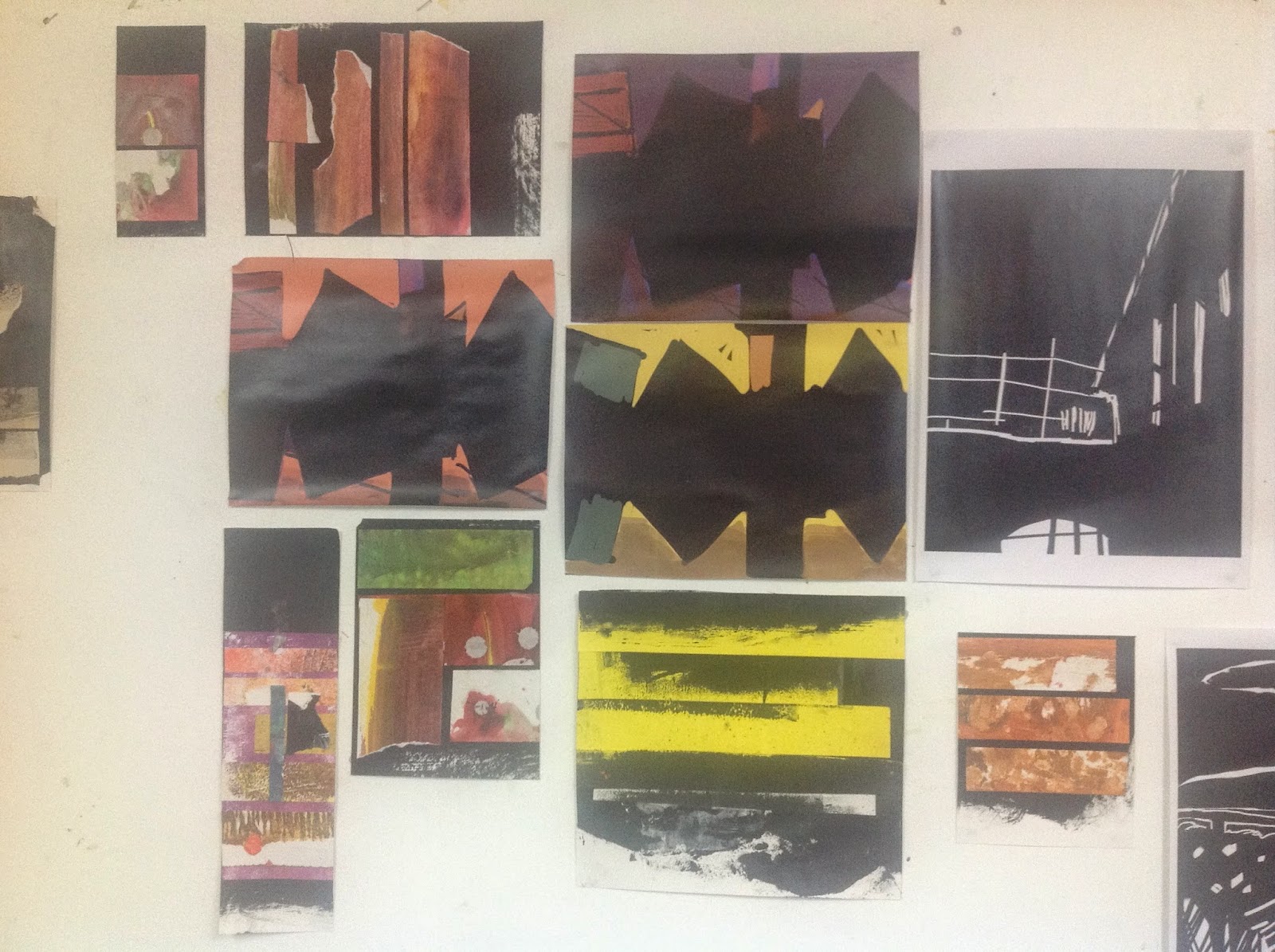 At a recent meeting with my fellow Indigo Octagon compadres, Chris and Andy, we were discussing plans for a new publication, and I took along some of my new collages. Discussing them with the others, it was generally felt that more recent ones I’d made were too literal and fussy, so I ended up cutting them up the other night to simplify them, which seemed to work better. I enjoyed that.  The new publication looks like it could be good fun too. Both Chris and Andy had done some terrific work recently, which made me think another exhibition would be a good idea. It’s just where? 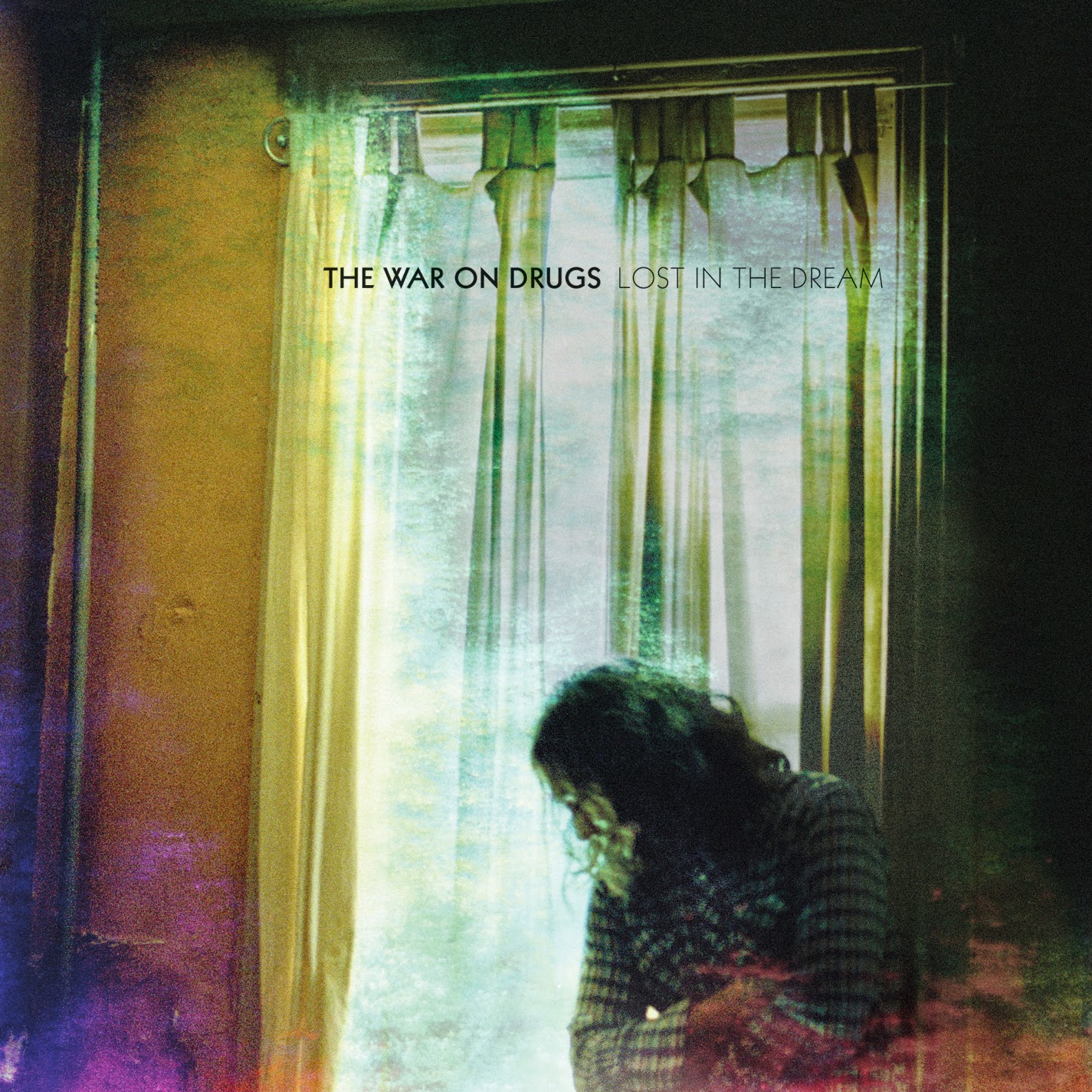 'Lost In The Dream', The War on Drugs
There are other things bubbling under the surface influenced by my other reading and listening tastes. This week, and in the studio when I’m working, I’ve been listening to The War On Drugs new album, which is really enjoyable and, there’s that word again, immersive. There is some wonderful guitar work in an album that proudly wears it’s influences on it’s sleeve.  Speaking of guitars, Tom Morello’s wildly inventive and wigged out guitar work brings something incredible to ‘High Hopes’, the recent album by Bruce, which I’ve also loved in the last couple of months. Some of the songs, such as 41 Shots (American Skin), and ‘The Wall’ are as moving and powerful as anything he’s made in 40 years. The re-visited ‘The Ghost of Tom Joad’, where Morello shines,is also bonkersly brilliant and just ROCKS!! The record is a bit like living in an episode of The Wire at times (not surprisingly Wire creator David Simon is a big Bruce fan too). Here’s a link to a current documentary about the making of it (it’s also been great to see the magnificent E Street Band inducted into the Rock n Roll Hall Fame sixteen years after Bruce the other night) :
http://www.theguardian.com/music/musicblog/2014/apr/07/bruce-springsteen-high-hopes-uk-documentary-premiere 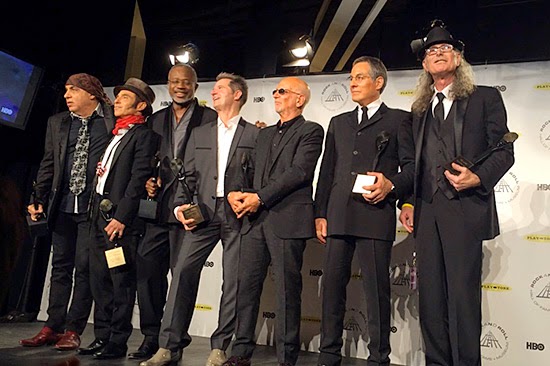 Bruce and 'Miami' Steve Van Zandt
On a gentler note, I’m also enjoying finally reading, amongst other things, Richard Mabey’s ‘The Unofficial Countryside’, the 1970’s book that is considered by many as the predecessor to the ‘Edgelands’ book. They seem very different things to me though, Mabey’s being more about the nature found in urban places and is very conversational in its writing style. 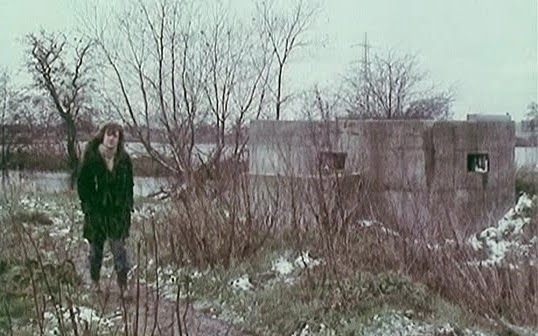 I’ve been wanting to go out walking and painting with someone who knows a lot about the nature and plant life I encounter in the off the track places I find myself attracted to working in, and today at work I discussed this possibility with a Biology teacher, Mick, who retired today, after being reliably informed this is a passion of his. It will be good to hook up with some time soon and overturn a few stones….

Posted by shaun morris at 20:20 No comments: