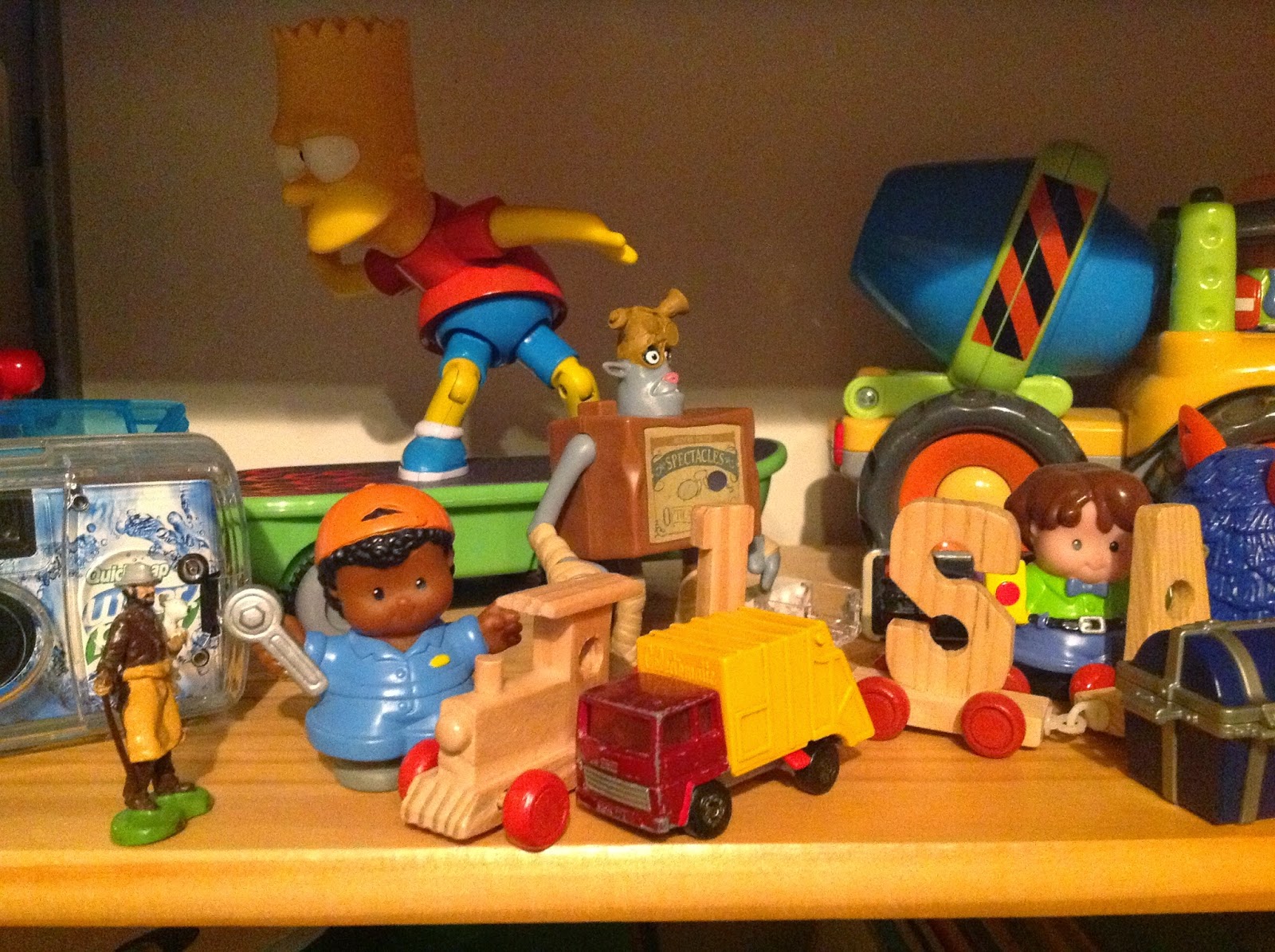 I was saddened to hear of the death of painter Jane Freilicher on December 10th, aged 90. She lived a long life and had a successful, respected and established career, still working and exhibiting at 89. Of course no artist ever retires, but it still took me aback a little as I’m an admirer and fan of her paintings and have learned a great deal from her and others of the so-called ‘New York School’ of painters and poets that followed the Abstract Expressionists in the 1950’s and 1960’s. These include painters Fairfield Porter. Larry Rivers and Alex Katz, photographer Rudy Burkhart, and poets such as John Ashbery, Frank O’Hara and Barbara Guest. Unlike the generation of AE artists before them, the painters of the New York School returned to a representational form of image making but tried to incorporate the language and grammar of abstract painting. This is what distinguished them, and kicked the door open for so many representational artists that have followed.  Fairfield Porter’s ‘Art In Its Own Terms’, a collection of his essays and art criticism, a brilliant book that I’ve recently read, and must be the best art criticism I’ve ever encountered, discusses in his writing on painting many of the concerns these artists shared and gives a real insight into this period. 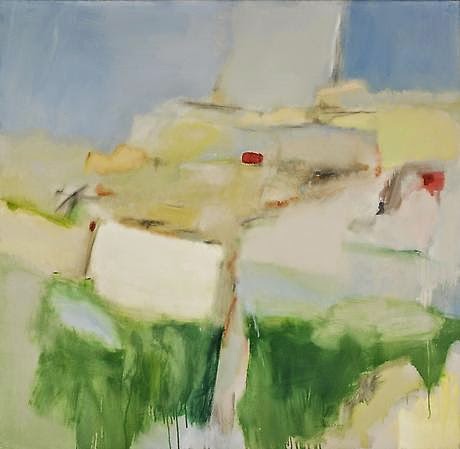 Untitled Abstract, oil on canvas, 1960, 60 x 60cms
Many of the surviving poets and painters paid tribute to Freilicher in a memorial service in New York a few days after her death, alongside a new generation of artists appreciative of her work. I’ve read many of the tributes by artists and journalists, and decided to select a review by her close friend poet John Ashbery of a Freilicher show at New York's Fischbach Gallery, published in our May-June 1975 issue of ‘Art In America’. It  seemed to describe really well many of the values I have found in her work, and have influenced my own painting in the last twelve years or so as I've fumbled around trying to develop something of a relevant language to depict the landscape of my own. 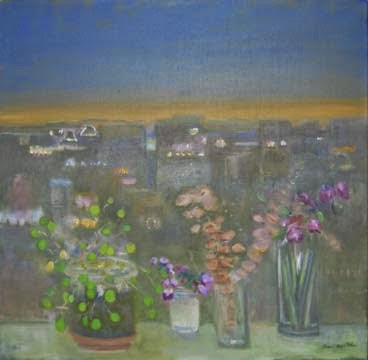 ‘Jane Freilicher showed paintings of the landscape outside her studio in Water Mill, Long Island, along with still-lifes and views of the city from the windows of her apartment in New York. Thus she is a painter of "what there is there," in Kenneth Koch's phrase. The Long Island landscape is beautiful, though not spectacularly so in reproduction, whether photographic or painterly: its beauty is more a question of light and atmosphere, both singularly pure and precise because of the nearby ocean. The land is flat, though in the distance there are some discreet undulations which pass for hills. The buildings, at least those the artist can see from her studio, are a discreet mélange—old frame houses of the type that used to be called "beautiful homes," less distinguished newer ones, and barns and sheds. It is a landscape as good as any other, perhaps nicer than many, but the artist is less interested in whatever picturesque qualities it may possess than in its exemplariness. Somehow everything she touches is revealed as a prototype, a sample of what there is there, though she would be the first to disclaim any transcendental intent and is probably unaware of this quality in her work. Obviously, she paints what she sees, but it happens that she sees a lot.

Creation—fresh, unassuming, a little awkward still with some of its folds not yet shaken out, is her subject; creation even in the joyous, homely sense Milton imagined it:

Forth flourished thick the clust'ring vine, forth crept
The swelling gourd, up stood the corny reed
Embattled in her field: add the humble shrub
And bush with frizzled hair implicit. 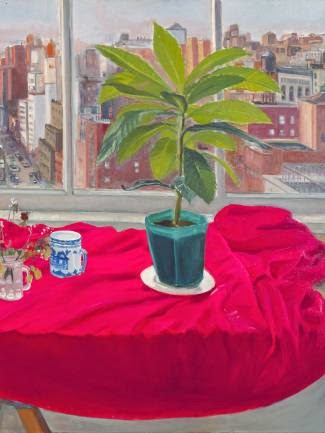 Nothing is made to look more important than it is, some things are even kidded a little. One is tempted to ask the floppy Marsh Bouquet: "And just who do you think you are?" When the houses down the road or the tower of the Con Ed building seem to be giving themselves airs, when the field outside the studio momentarily assumes a brightness that is out of keeping with the glum cast of light in the sky, these discrepancies are noted, but sympathetically. Everything is free to be itself, nothing is too tentative or modest to be included in her factual but generous account of what she sees. 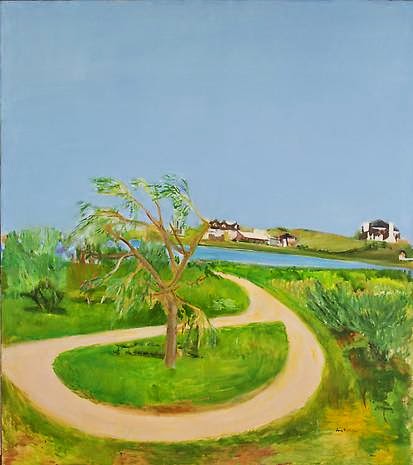 In the landscapes, the "interesting" part of the scenery—a bay, a line of trees, a roof poking mysteriously out of the foliage—is usually in the distance, as is true of most landscapes; the foreground may be occupied by some "frizzled" shrubbery. That's the way the view is, but one can't help reading a kind of moral order into the way the scale of things is managed: these are "democratic vistas." In Potato Truck, everything hinges on the truck, a tiny patch of man-made red in the distance, organizing space like Stevens' jar; but what is closest and biggest are some bushes. They are elaborated more thoroughly than anything else in the picture perhaps just because of their shapelessness and their inability to benefit very much from celebration by a poet or a naturalist. So they are left in their frumpiness, looking unfinished despite the articulation lavished on them. Nature is efficient but not always neat, and the romantic depths of the painting, suavely and succinctly painted, seem to recognize the justice of this and efface themselves before its logic. And two of the still-lifes, One Cat, Two Fish and Objects on a Table, are miniature cosmogonies: all things in them co-exist and are allowed their idiosyncrasies, as is subtly indicated by the varied handling of paint. The cityscape outside has a Guardi-esque fluidity, but on the table things are less easy: some objects (the loaf of bread, a branch of broccoli) are deftly encompassed; others are allowed to appear as problematical, as recalcitrant to easy solutions as they would have looked to Cézanne.

The swift transition from style to style is one of the most remarkable things in Freilicher's painting. The denotative and connotative jostle each other, with no fixed boundaries; a rough tangle of brushwork menaces a sleekly realistic passage. A field as minutely painted as Ruysdael would have done it leads to a cloud on the horizon which really isn't a cloud but a brushstroke. "Non-representational" painting is always lurking in the background, or the foreground for that matter, of an ostensibly straightforward account of a landscape, and of course landscape is like that; the eye deals with some of it and neglects the rest. Other painters have made the point, but in Jane Freilicher's case the transitions are so gradual, the differences so close, that her grammar of styles can easily go unnoticed. The viewer imagines he is looking at an "objective" account of trees or a table top without realizing that they have been dismantled and put back together again almost seamlessly. It is only on closer inspection that the oddity, the purposeful inconsistencies of tone, the fact that everything doesn't hang together quite as it should, become apparent. By then one has accepted the anomalies as the norms that they are. Her purpose in ruffling the surface, in injecting not her own note but that of things, in showing up each element's poignant desire to make its own point, to put itself across, to be accepted on its own terms, is to restore the primitive calm that the world presumably had before anyone had looked at it, to reinstate that higher naturalness which can only become visible with the help of a little artifice. She succeeds both in recreating the innocent look things presumably once had and reconciling it with the knowledge of them we have now’.
John Ashbery, 1975 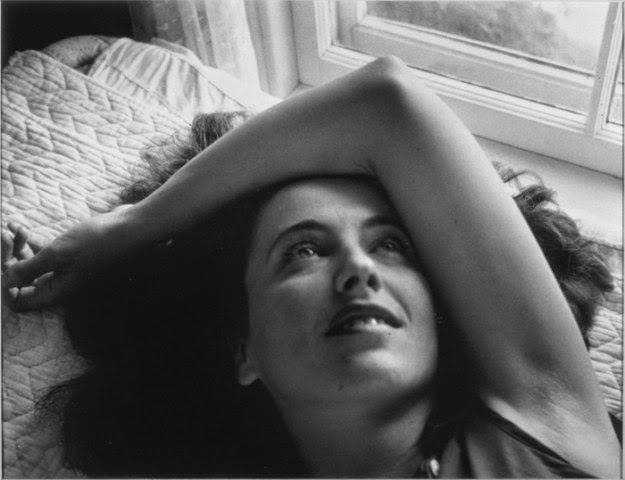 Posted by shaun morris at 15:37 No comments: 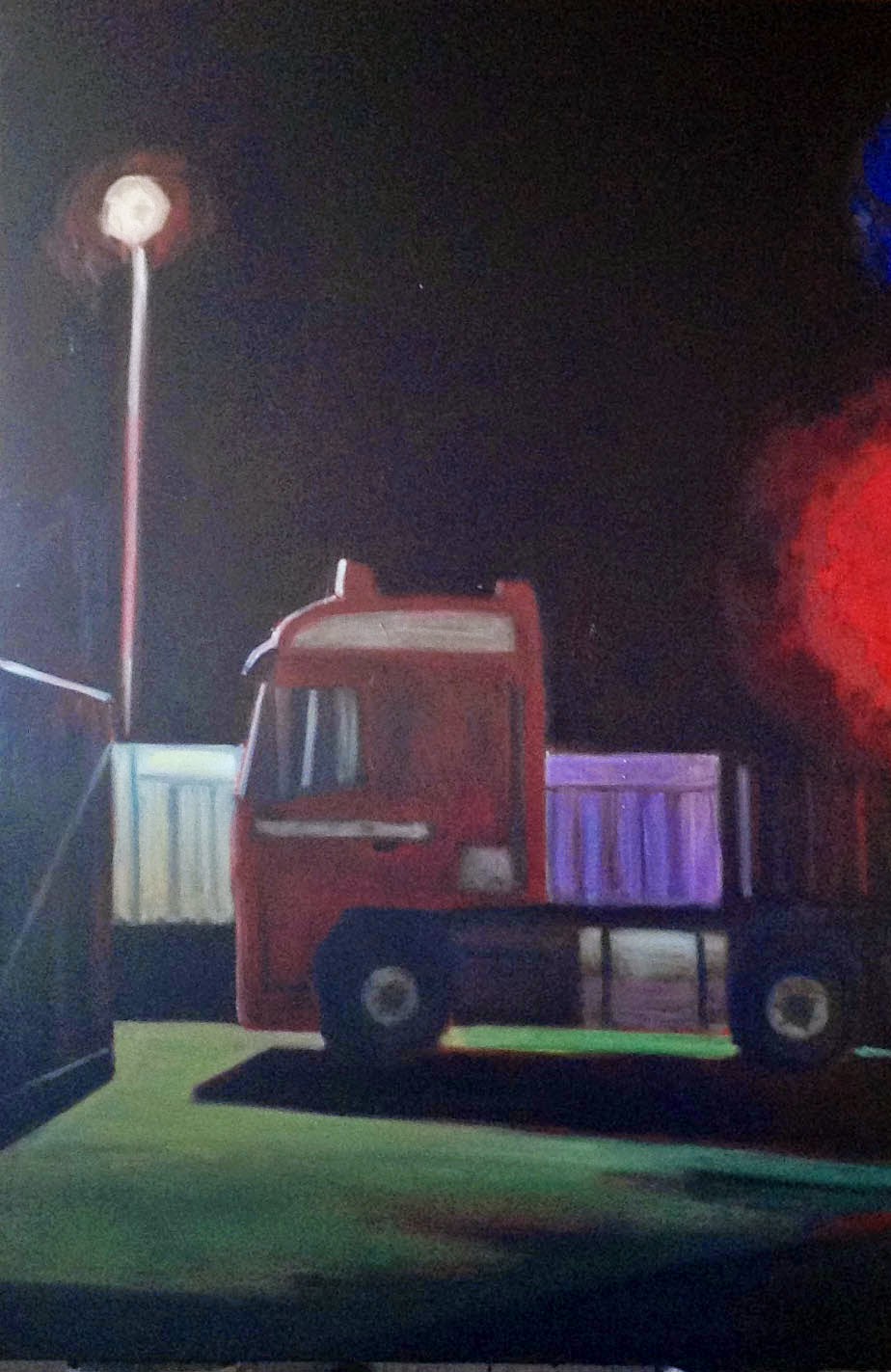 There were a few activities organized by different departments across the college to mark today’s hundredth year anniversary of the beginning of World War 1.  I held a presentation of art created from the period by different artists from both Britain and Germany, as well as looking at more contemporary examples by artists in more recent conflicts.  Here are some of the examples of paintings I shared with my students and colleagues today to remember the terrible loss and sacrifice made by so many, and the key role art, from painting to poetry, has played in helping us attempt to understand the horrors of war and conflict. 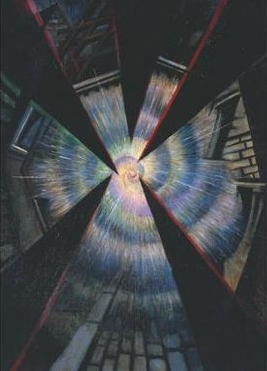 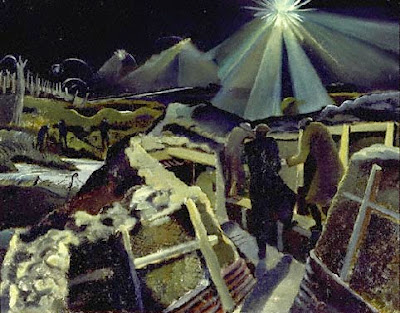 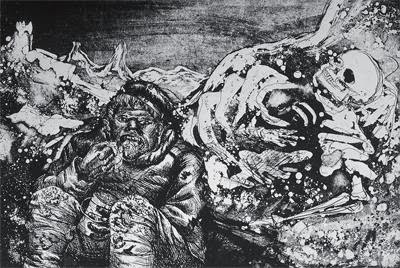 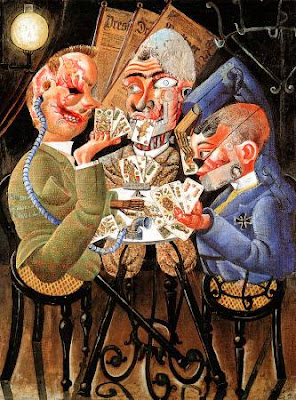 Otto Dix, 'Skat Players', oil and collage on board, 1920
The brilliant Otto Dix, like so many German artists, was never afraid to look at things head on. Here in this painting he mercilessly depicts the former generals and officers who sent so many innocent men to their deaths with their terribly mutilated bodies and crude artificial limbs and 'tin jaws', yet still looking smart in their uniforms, medals proudly worn. Sights of ex veterans like these were common on the streets of post war Germany.

Henry Tonks, 'Portraits of Injured Soldiers', pastel
Tonks, a former doctor before becoming an artist, was asked to detail the terrible facial injuries suffered by 15% of soldiers on the frontline to aid early practitioners of plastic surgery at the Royal College of Surgeons. 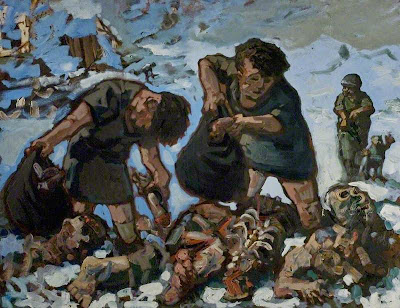 Peter Howson, 'Bosnian Harvest', 1994
Howson, a former soldier himself, was commissioned by The Times and The Imperial War Museum to be the official War Artist in Bosnia in 1993. Gruesome scenes like these, where local women collect the mutilated limbs of dead civilians, sent Howson to the edge of a breakdown.

Lest we forget.
Posted by shaun morris at 22:41 No comments:

Tail Whips and Back Flips 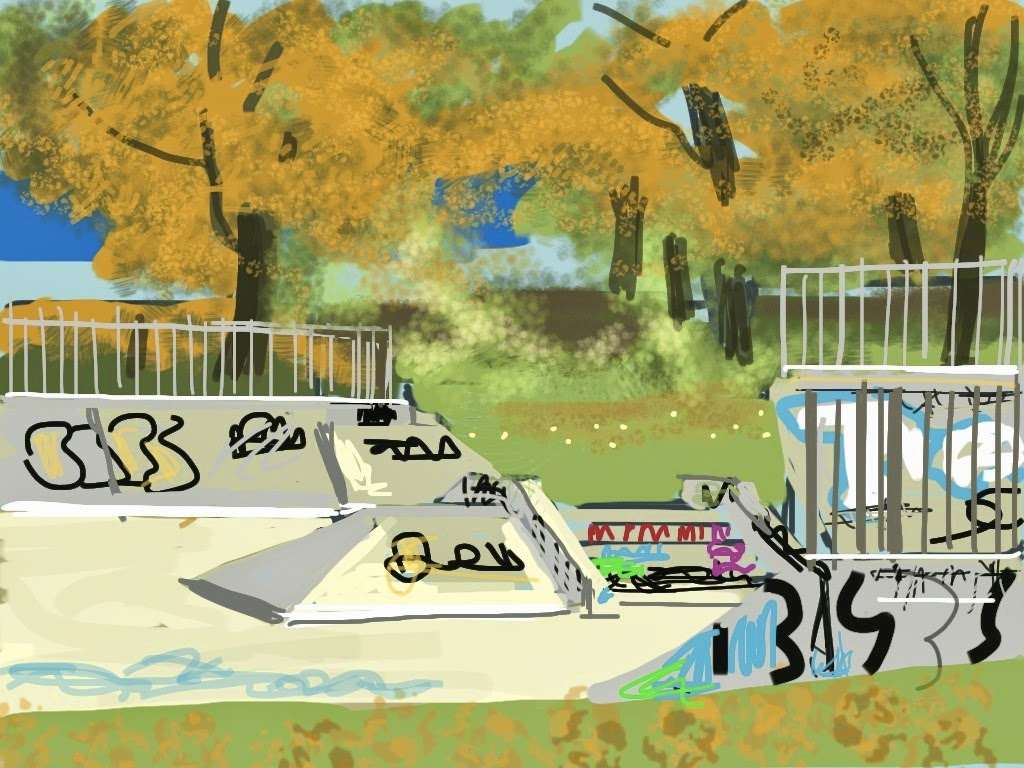