Glenn Brown and other stuff... 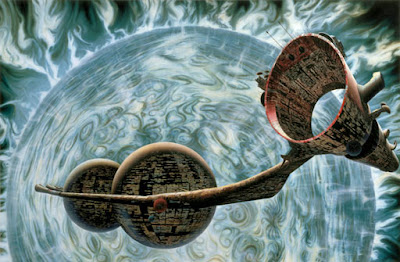 I visited the Glenn Brown retrospective at Tate Liverpool the other day. It was very exciting walking into the first room to be confronted by these huge canvasses of space stations and otherwordly landscapes appropriated from sci-fi illustrations and John Martin’s apocalyptic landscapes. I remember when these paintings were first exhibited and the controversy they caused. They were pretty outrageous, and still are.

From here the show moved you on through rooms that looked at the work that dealt with his interest in making paintings inspired by reproductions of others’ work, changing and distorting them, reducing thick expressive brushwork to invisibility and flatness. (Follow the Tate link, it explains it all much better: www.tate.org.uk/liverpool/exhibitions/glennbrown ). I really enjoyed Room Three with the collection of really nice re-interpretations of Frank Auerbach portraits. They were just incredibly beautiful on so many levels. I was getting really excited, wondering where things were going. And then…well, slowly I started to get incredibly bored by it all. The ‘flattening’ and distortions seemed to become really mannered in the worst sense. What started out as a critique of the materiality of painting and authorship of image, seemed to really unravel. All the paintings just had the same ‘look’ and had become distinctly ‘Glenn Brown’. Despite being made from a huge variety of sources they all ended up with essentially the same treatment of tiny curly marks with very little variety. It seemed to me to de-bunk the central critique running through the work, and the working methods of Photoshopping and projecting onto the canvas became more and more apparent. 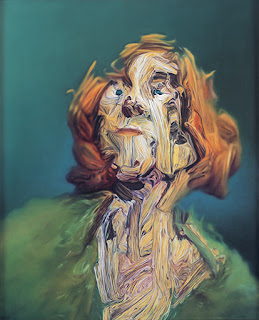 The hand that painted them seemed less and less invisible too. But it was the style itself that seemed to suck the life out of any enjoyment of them after a while and the titles continually drawn from song titles seemed so annoying after a while too. In some there were little areas of flat colour I found myself really being drawn to as an escape from the figures and objects. Finally, I found myself reflecting upon how individually they would be very seductive in their scale, use of colour, weird, edgy images to a lot of private collectors. They seemed oddly very commercial. 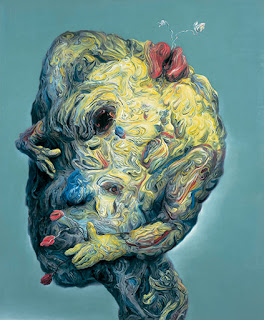 Today I met Professor Tim Collins, Associate Dean for Research and Development at the School of Art and Design at Wolverhampton University. What was originally planned as a meeting about funding opportunities, slowly became a bit more of an intensive discourse about my portrait paintings. It felt really exciting being challenged about my work, and made me reflect about how when you are just working in isolation in your studio so much of the time it is difficult to get a more critical dialogue about your work. I do get the odd comment through the blog or my e-mail, but if anyone is actually reading this and wants to discuss the work further I’d really welcome it at times. 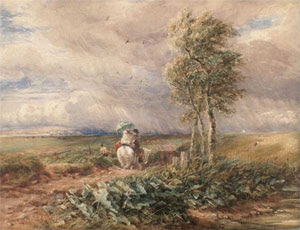 Finally, I took my students to see the David Cox landscape exhibition at Gas Hall yesterday. It was terrific, and they all loved it too. This was then followed by a trip to Ikon to Zhang Enli’s paintings (see previous blog!), which was greeted by utter indifference by the group. The student’s comments are often very insightful, and their cynicism with the ideas and the paintings themselves, confirmed my own doubts. And don’t get me or the students started on the work of Andrede Tudela’s installation in Gallery 2! Trying to get them interested in this made me feel like I deserved another half term holiday. They had some interesting ideas on how it could be improved though…
Posted by chris cowdrill at 18:31 No comments: 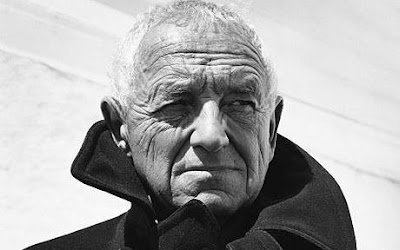 I discovered today that the great American painter, Andrew Wyeth died in January. He was someone whose work I have enjoyed a lot over the last few years, having discovered his work for myself about ten years ago. I was aware that he is someone whose paintings were quite derided by critics, but very popular with the American public. Reading all the obituaries today I was surprised to read just how much controversy his paintings created in his heyday during the 1960’s.They were seen it seemed to represent a formal and political conservatism in their realism at odds with other artistic trends of the times. This seems to be why they were so popular with the public and also with Republicans such as Ronald Reagan and George Bush, who owned his works.

I’m interested in the mystery of appearances, and this for me is expressed so vividly in the best of Wyeth’s paintings. His wonderful pencil drawings also demonstrated to me the possibilities of this medium and persuaded me to work more creatively with this. I like the emotional and formal restraint in his work most of all, however. This always seemed extremely well-judged and gave the paintings a real charge. I’ve often been inspired by a quote he made in the wonderfully illustrated monograph, ‘The Helga Pictures’, that I own,

‘There is a quote from Hamlet that is my guide…
He tells the players do not exaggerate, but hold a mirror up to nature.
Don’t overdo it. Don’t underdo it. Do it just on the line.' 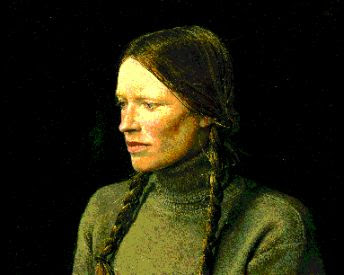 I think he was an incredibly talented artist, with a very rare and unique vision. His death is a great loss to painting. At least we are left with his wonderful paintings to continue to enjoy.

Posted by chris cowdrill at 20:59 No comments:

I came across these amazing recent prints by Scottish artist Ken Currie on the Flowers East Gallery website. I’m a great admirer of Currie’s paintings, and I think he approaches his artwork with a tremendous intellectual rigour combined with incredible craftsmanship. Like all great artists, he also has an important working knowledge of art history, particularly the great European masters of painting. 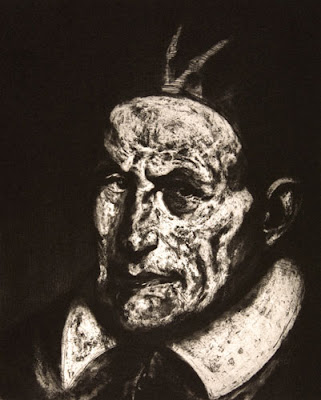 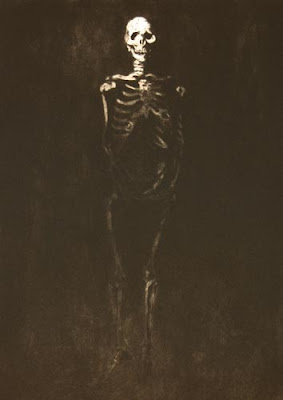 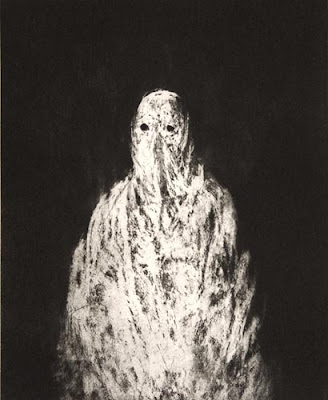 Cerements, etching, 2005
When I was studying for my degree I based my dissertation on Currie’s work. The year I was selected for the Jerwood Drawing Prize in 2003, Currie was also one of the selector’s. He was one of the motivations for entering, thinking I’ll kick myself if I don’t try this year. I framed up this big skull ‘cartoon’ I’d made as prep for a painting, half jokingly thinking, ‘Big Ken will love a nice skull’. And sure enough my piece was selected. He was there at the private view, but I never approached him. There’s something often said about not meeting your heroes…

When I look at these prints and this other painting I’ve singled out below it helps me to understand some of the frustrations I find in artists’ such as Zhang Enli at Ikon, who I recently mentioned. This is a very similar image to ones by Enli; a seemingly banal object. But in the hands of someone of Currie’s skill it goes much, much further to being elevated as a serious thing of contemplation. It has that thing of being one of those images that burns itself on the back of your mind. Others just seem lightweight and flacid in comparison. 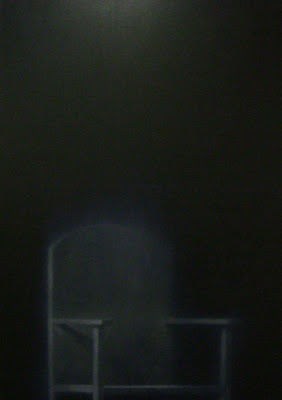 Absent Presence,
oil on canvas, 2004, 214 x 154.5cms
Looking at these prints is also quite sobering in relation to my own meagre efforts! At least it gives you something to aim for? Doesn’t It?
Posted by chris cowdrill at 09:54 No comments:

I visited the new exhibition at Ikon the other day. The paintings of Chinese born artist Zhang Enli are subtle things that I think I’m going to have to visit again. Painting is a more subtle language that often does need time from the viewer, but they didn’t work their magic for me if I’m honest. They are paintings based on photographs, and explore, amongst other things, the relationship between the two media. I’m finding this less and less interesting and in these paintings I felt like I’d seen it all before: the loose brushwork and thin turpsy paint; the photographic framing; the banal objects. But, I’ve often found my first impressions misjudged, so I think I would like to go and see them again. I think I was a bit put off by the gallery’s literature too, which felt so predictable in it’s explanations of the work. I’ll ignore that next time. 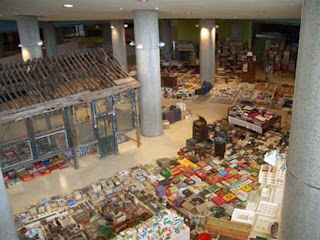 By comparison, ‘Re-imagining Asia’ at New Art Gallery Walsall was much more interesting. I visited it this afternoon with my young nephew, Oliver who is twelve years old. His enthusiasm kept any of my prejudices and cynicism in check, which is no bad thing. It was a lovely afternoon.
Posted by chris cowdrill at 19:20 No comments: 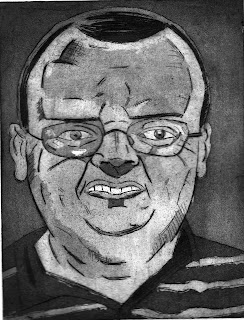 I’m pleased with this aquatint of ‘Robert’. After getting excited by the results of ‘Ken’ the other week, I’ve gone on to try five more aquatints in the last few weeks. This has been the only successful one though, as I failed to prepare my hard-grounds successfully, and some of the acid bit through to create a ‘speckly’ texture. It’s all a big learning curve, he says philosophically. But I managed to rescue this one through the aquatinting to finally create something I’m pleased with. This is a particular favourite image. I’ve tried about five different versions of it in the last few months. After this first rough proof, I finally feel ready to actually print an edition from this plate. That feels pretty exciting and a step forward. 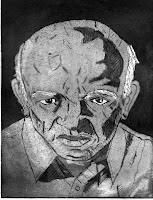 I’ve added some of the less successful prints here too. ‘Mr Bhatt’(left) and ‘Val’ (right) are tonally a bit flat. Next time I will prepare a test strip of different timings in the acid to help me bit a bit more careful with how long I put the plate in each time. I was a bit free and easy with this aspect, just trying to experiment. They have some nice qualities I think are worth exploring further though. In the ‘Mr Bhatt’ image you can see the ‘speckly’ texture I mentioned.
Posted by chris cowdrill at 12:15 No comments: