That’s me that is- the artist in the title of this post. I received news today that I have been awarded a major arts council grant. I can’t believe it and am still trying to peel myself off the ceiling. It’s a research and development grant to support my interest in landscape painting primarily, but with other things too, for the next two years. I haven’t wanted to say much on the blog as I thought the application would likely come to nothing, but…well, here I am today finding a big envelope from the Arts Council on my doormat, not the expected thin, small envelope I received last time I applied and was rejected, and jumping up in the air with excitement. I’m looking forward to sharing some of my plans and the work I hope to make over the coming months. As from today I’ve suddenly got so many things to plan and to start getting busy with….

At last, I’ve achieved a break. I’ve had lots of knockbacks and rejections from galleries in the last couple of years, which is why I ended up applying to the Arts Council, with the thought that galleries are certainly not the only way to support what you want to do. Almost all commercial galleries depress me and seem so limited with what they are prepared to exhibit, unless one is based in the capital. It’s great to get some validation and support for my ideas and work that is not based around making things to sell. Instead, it’s based around the fact that they might just be interesting things to do and hold some sort of wider cultural and social value. That ties in with my own values as an artist and how I go about trying to make things. A new journey begins…who would have thought?

Posted by shaun morris at 18:52 No comments: 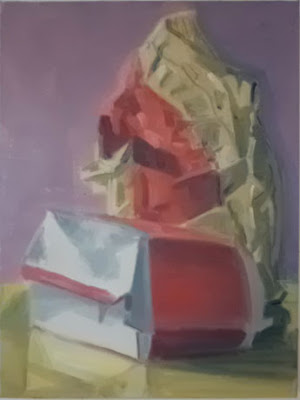 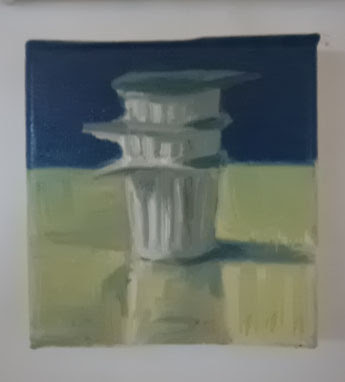 'Milk Cartons', oil on canvas, 10 x 10cms, 2012
I did these paintings the other day. I really enjoyed doing them, and I'm pretty pleased with the results, but on looking at them an hour or two later I just felt an almost overwhelming sense of anxiety....
Posted by shaun morris at 18:18 No comments: 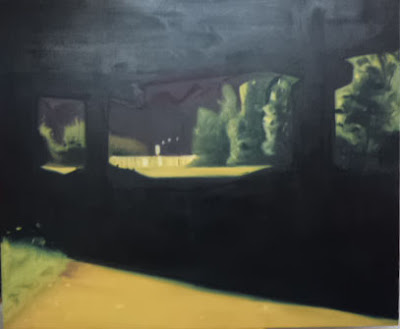 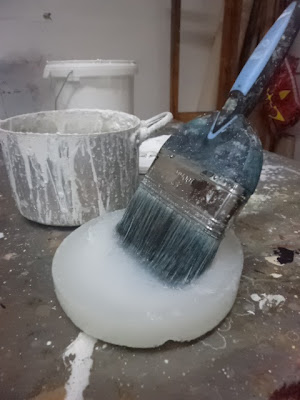 It’s cold in the studio recently. Working in cold and draughty studios housed in old factories can be the artist’s lot, and I’ve done my time over the years with chill blains and so many thick layers you can barely move. Once my heaters are on it soon defrosts though…

Posted by shaun morris at 08:55 No comments: 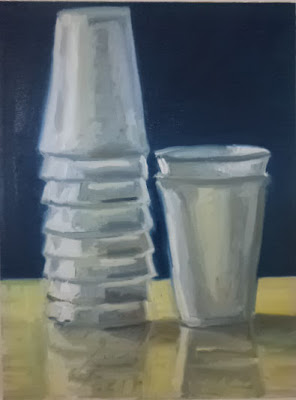 ‘Can you save your cup? Or get me one of those cardboard cup holders you had before?' I found myself asking my wife, Diane, this morning. She had told me she was going to stop off for a take away coffee on the way to work. I feel like I’m getting a bit obsessive about collecting bits of disposable packaging for these little still lives at the moment. We had lunch at the supermarket the other day, and as we were leaving I found myself furtively wrapping up the tiny milk cartons you get for your drink in a napkin and stuffing them in my pocket. Diane just gave me a look that said it all.

And to be honest, I’m not even sure why I’m painting them. I’m enjoying doing them, that’s true. I enjoy just painting from direct observation like this. But a big part of me thinks that they look just look like exercises done in a painting class, which feels wrong. Yet, one wouldn’t really paint these things, it would be flowers in vases, bowls of fruit. Unless you came to my class that is, where I’ve had the students painting these things too…with some good results…I think its’ best not to think too deeply. It will fizzle out on its own. I feel like I’m just sort of digging around, gently trying to excavate something.

I’m also obsessively playing ‘Diamond Mine’ by King Creosote and John Hopkins at the moment too. What a beautiful record. We’re off to see them at Warwick Arts Centre at the end of the month. Can’t wait…maybe there will be some good disposable packaging in the bar….

Posted by shaun morris at 11:12 No comments: 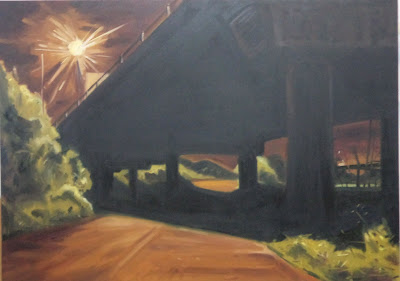 oil on canvas, 100 x 150cms, 2012
“It’s too dark,” my three year old, Isaac said on seeing this new painting. He’s probably right. It’s certainly too dark to photograph properly, but here is a photo for now of my first large motorway oil. I’m pretty pleased, but not thinking too deeply about it. I’m just going to move onto the next one for now…
Posted by shaun morris at 09:42 No comments:

I’ve been reading with interest David Hockney’s digs at Damien Hirst ahead of both of their forthcoming exhibitions at the Royal Academy of Arts and Tate Modern, respectively. In the article below, which I’ve taken from The Guardian, website, it discusses Hockneys’ reservations about superstar Hirst: 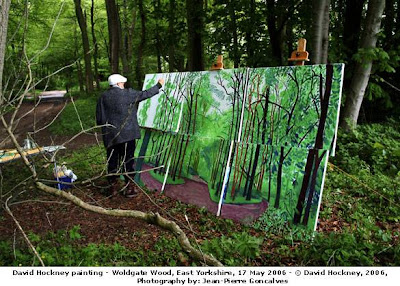 ‘A small note on the posters for David Hockney's forthcoming exhibition at the Royal Academy contains a sly dig at another superstar artist about to launch a major exhibition. The note reads: "All the works here were made by the artist himself, personally."

In an interview with the Radio Times, Hockney confirmed that he had in mind Damien Hirst, whose £50m diamond and platinum skull will be the centrepiece of a Tate Modern exhibition in April, the first solo show of his work in a UK museum. Hockney, who at 74 is creating enormous landscape paintings based on the fields and woods of his native Yorkshire, agreed that he had Hirst in his sights, adding a criticism of art schools.

"It's a little insulting to craftsmen," he said. "I used to point out, at art school you can teach the craft; it's the poetry you can't teach. But now they try to teach the poetry and not the craft." He quoted a Chinese proverb that to be a painter "you need the eye, the hand and the heart. Two won't do."

"The other great thing they said – I told this to Lucian Freud – is, 'painting is an old man's art'. I like that."

Like the Hirst exhibition, David Hockney: a Bigger Picture covers decades, though the artist says, firmly: "It's not a retrospective. When they came to me three or four years ago, many of the pieces that are in the exhibition did not exist."

The Hirst show will include pieces made by assistants including the taxidermists who worked on the famous pickled shark – The Physical Impossibility of Death in the Mind of Someone Living – and the cow and calf, Mother and Child Divided. Hirst once said he employed assistants to make works such as his scores of spot paintings because "I couldn't be fucking arsed doing it".

The platinum and diamond skull, For the Love of God, became the most expensive modern work sold – albeit to a consortium that included the artist and his White Cube gallery. It was made by the London jeweller Bentley & Skinner, and a proud photograph of it can be seen on the wall in the firm's Piccadilly window.

Despite Hockney's reservations, the practice of artists employing production lines is ancient: as the National Gallery exhibition shows, Leonardo da Vinci used many assistants, some of whom became celebrated artists in their own right. And in the 20th century, artists including Andy Warhol embraced the slick, mass-produced look of multiple copies.

When Hirst has picked up his own paintbrush, the results have not been universally admired. An exhibition at the Wallace Collection in London of paintings inspired by Francis Bacon was hammered by the critics, including the Guardian's Adrian Searle, who called his work "amateurish and adolescent". The pieces will not feature in Hirst's Tate show’.

Good old David Hockney, I say. I don’t necessarily agree with him about the use of assistants: it is a common and long lived practise, but Hirst deserves a kicking in my opinion. Those recent paintings at The Wallace Collection were truly awful, and belonged more to my A level students than the world’s most famous artist. It was depressing to see these alongside Titian, of all people. 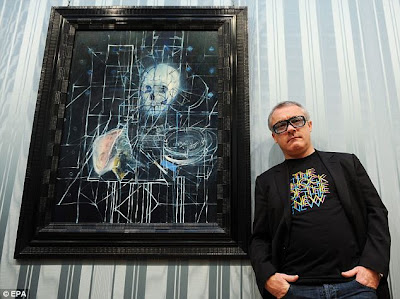 A few years ago I was in New York’s Chelsea district with Diane spending the morning looking around many of the little galleries the area is known for. I saw some great painting, where there was a real sense of artists striving to connect with the culture of painting. (I use the word ‘culture’ as something I’d like to discuss further at some point). We then walked into the enormous Gagosian Gallery to be confronted with Hirst’s first, and last I seem to think, forays into photo-realist painting. These were all done by assistants too, and done really badly to be blunt, and featured all of Hirst’s usual trademark imagery of pills, hospital wards, labels, and skulls. (One of the skulls looked remarkably like one I had recently done, which I thought depressingly typical. Mine however, was all my own work and painted entirely from an observation drawing I had made, so there!) Anyway, I found the whole experience depressing in all sorts of ways. It seemed trite and incredibly cynical after all the things I had seen that morning. As if Hirst had decided to put his painting hat on, and thought I’ll have a go at that next. Only he didn’t did he? He couldn’t be truly ‘fucking arsed’. Someone else was paid to do it!

Hockney, on the other hand is an artist who can be totally arsed. His whole career has been one characterised by restless investigation and experimentation, as can be seen by these incredibly ambitious and exciting Yorkshire landscapes. He is an artist who truly has something to say about how we view the world and art. I don’t get that at all from Damien Hirst. It is an art trying to compete with the mass media, like so much contemporary art, and that is why it fails.

I like the Chinese proverb about painting being ‘an old man’s art’. I can all too happily live with that. Here’s my better skull painting too, made by myself, personally... 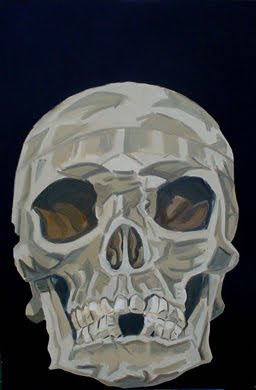 Posted by shaun morris at 15:50 No comments: 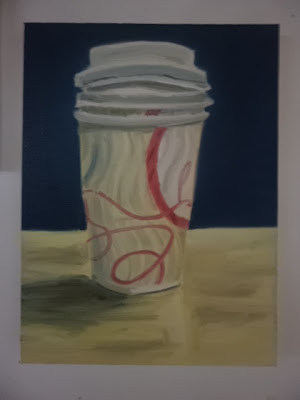 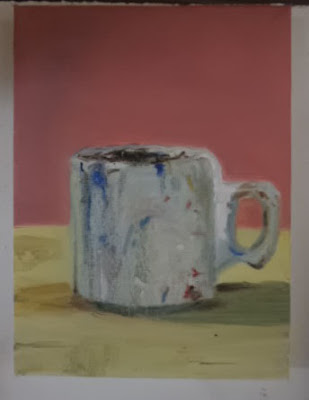