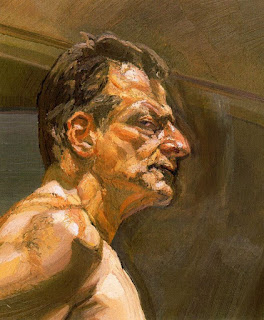 I’ve just finished reading ‘Lucian Freud, Eyes Wide Open’, a biography of the celebrated British painter by Phoebe Hoban. (I think Freud, the grandson of Sigmund Freud, is seen as a British painter because he spent his entire adult life working here from various studios in London. He emigrated here aged eleven, however,  when his family fled Germany from the Nazis. He always maintained a strong German inflection in his speech). I bought the book, at 150 pages a fairly slight read, from a charity shop in Oxford. I was intrigued, not so much by an interest in his work, which I have encountered a great deal in varying degrees over the years, including his large Tate retrospective in 2002, but in wanting to learn more about this intensely private and guarded man, whose personal life is often shrouded in myth and mystery. 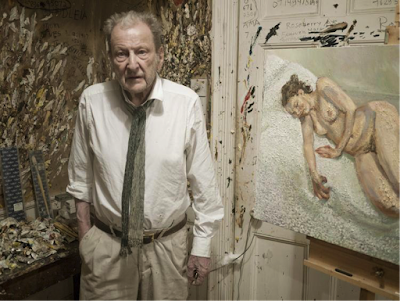 One of the most talked about aspects of his life is his reputation as a womaniser, which saw him father up to fourteen children with various wives and lovers. Because of his unrelenting, selfish commitment to his painting, his ‘absenteeism’ as a father to those children is also often talked about. His children, as young adults, and even children, were often the models, both naked and clothed, in his paintings, and thus subject to his unflinching gaze. There is obvious pain discussed by them in the book about his absence when they were growing up, but in the days, months and even years they spent posing for Lucian they built a close relationship to him. Indeed, despite the difficulties between them, what did emerge was a close and deep affection for their father, who could be a very funny and warm and generous man. His last few days, as he died at aged 88 from cancer, with his family around him, is written about very poignantly. (It is also notable that Freud’s libido never seemed to wane he got older-he was still dating women in their thirties while in his late eighties). 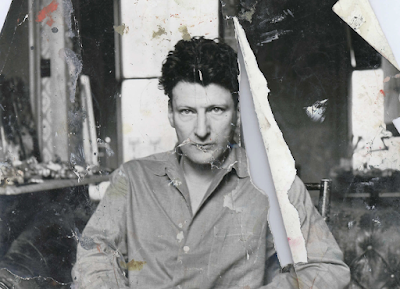 Photograph of Lucian Freud by Francis Bacon
He was also a compulsive gambler, like his close friend Francis Bacon, and would literally lose all of his money at the horses, every penny, a feeling he described as ‘cleansing’. Still, with the aristocratic company and circles he moved within throughout his life he always seemed to scrape by, but worked in studios which sounded as if they could only best be described as hovels, until he finally found more sustained success. His relationship with Bacon is recounted in some detail. I didn’t realise they had been so close until they had a falling out in the Seventies. Freud looked up to Bacon, ten years his senior and a great risk-taker both in his life and art. Bacon would come round for dinner every night for years apparently. Freud also spent some time in Paris, where he spent time with Picasso and Giacometti. 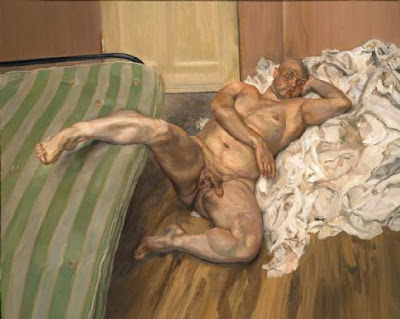 'Mude With Leg Raised', oil on canvas,
What I emerged with most from the book though, is a deeper appreciation for Freud’s actual paintings and what an enormous achievement they are, having, to be honest, always been a bit ambivalent about all that flesh in those bare, wooden floor-boarded rooms. Reading about his determination in pursuit of a technique where he never over-painted areas, each part of the painting being painted piece by incremental piece, building the painting over extensive long periods, even years, and always from the model observed in the room. I think that’s really something. And to insist on always having the model present, so as to never be alone in the studio, is very unusual for an artist. It takes incredible stamina and mental strength to work like this, and on such a large scale, and he was doing this until a few weeks before his death.  Also, his work stands as uniquely his own, with a vision of the human form as ‘animal’ which he almost forensically and relentlessly pursued. I think this is true too of Bacon, although the early influence of Picasso helped him develop his language.  Despite the associations with a so-called ‘School Of London’, a term coined by R B Kitaj, I think artists like Freud, Bacon and Frank Auerbach too, as well as many other British artists are great individuals that broke through internationally and put British art on the map, and unlike the great European Modernist movements, it is these artists with their ambition, commitment and often eccentric views who often seem to define the unique character of the best of British Art.

Here is a link to a moving film of Freud on his last day of painting before ill health finally overcame him..
https://www.youtube.com/watch?v=q_J6Aql3aRw 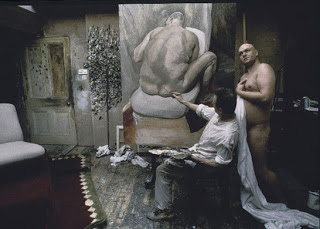 Posted by shaun morris at 20:32 No comments: