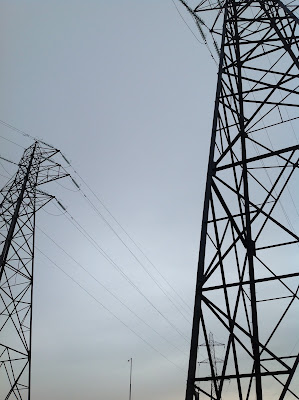 I’d prefer to define myself as a painter than an artist.

I only really enjoy painting: appreciating it, doing it, learning about it (and some sculpture). Most contemporary art has little interest for me, despite continued attempts to engage with it over the years. But that seems a fair position. It’s like expecting a football fan to like all sports other than his beloved football.

There is great value in working in a specialized field like painting. It’s important to measure yourself against and understand it’s traditions and history, while avoiding being too reactionary. It seems to have more value than floating around the abundance of choices available to the contemporary artist who inevitably ends up not really having a deep relationship with anything. You do not find any other type of artist, such as writers, film-makers, or poets working like this. There is so little time to do it all! 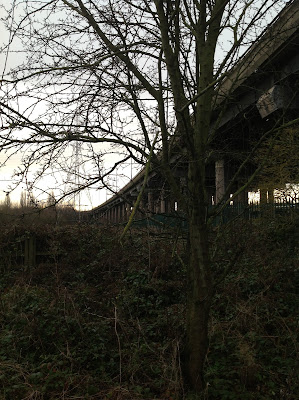 I’ve learned more about painting in the art criticism of contemporary Welsh painter Merlin James than anyone else.

It’s ok to use photographs to support my own painting.

The influence of Gerhard Richter’s paintings from photographs really get in the way of most modern painters exploration of the relationship between photography and painting. If you want to learn more about the possibilities of photography and painting you would be best to look at an artist like Walter Sickert. He was much more creative and forward thinking.

Richter’s lack of compassion is rather sad and poses many problems in contemporary painting not found in art forms such as literature, theatre and film. 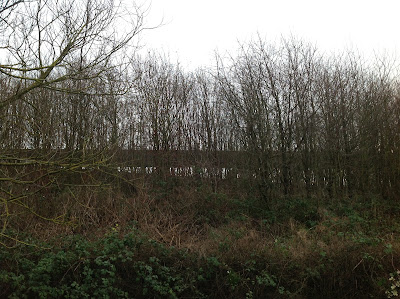 Working in collaboration has stretched and challenged me much more than working on my own. I would like to do more of it in 2013.

I feel I work in a very narrow way most of the time, yet I continue to find myself in new and unexpected situations. And that is just when I walk through the studio door. 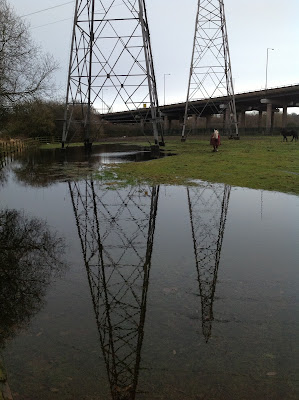 The fact that it is not an embarrassment to me that most paintings I’ve made this year are inspired by the mood evoked in a Bruce Springsteen song  says much about my love and respect for the man and his music.

‘Wrecking Ball’ by Springsteen is probably my album of the year. Bruce live at the Etihad Stadium in Manchester is definitely my gig of the year.

I’ve got my tickets for Bruce at Coventry Ricoh Stadium in June 2013. You should too.

I love Bob Dylan’s music with a passion, but I didn’t understand the fuss about this year’s ‘Tempest’ album (and who does those dreadful sleeves? The same artist that sourced Bob’s China paintings on Flikr?)

My experience in Norway taught me to always listen to people, especially when you can’t hear them speaking

My experience in Denmark with my friends reminded me to keep taking risks. More importantly they reminded that it’s not the small things that matter, just the details...

I hope that this doesn’t read too much like something I may have found in a Christmas cracker this season….but I feel like it does! 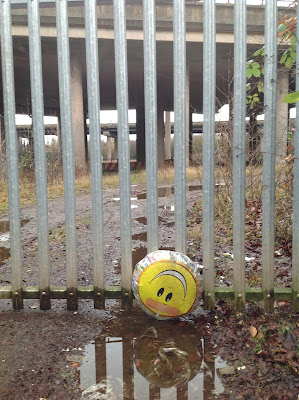 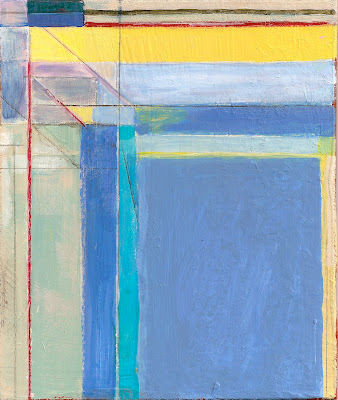 'Catherine to Claire', Richard Diebenkorn
I’ve been mulling over lots of things lately with regards to my painting (I’m a good muller. Sometimes it is the only thing I can or have the time to do when the pressures of work and family take over). I’ve also seen a few good exhibitions, and been trying some new things.

One of these included a recent staff development in mixed media painting lead by artist Jenny Muncaster. I’m not very experienced in mixed media painting as it is something I’ve not had much interest in relation to my own work. Despite having a BA (Hons) and MA in Fine Art, Painting, like most artists much of what I’ve learned in the craft of my practice is self-taught and lead by my personal interests. Anyway, I really enjoyed the day and really found Jenny’s enthusiasm inspiring, and discovered lots of new techniques, which my students have been trying with great gusto ever since. It’s really opened up their work, and broadened my own delivery of teaching painting, which is what I was seeking.

So many artists/lecturer say you can’t ‘teach’ painting, meaning students either have it or they don’t, but I think this is a load of nonsense and history proves this. It’s just a lazy and unimaginative attitude to teaching. The more formal teaching I’ve received is the stuff that has carried me furthest, and this approach underlies much of my own work with students. It’s the poetry that is harder to teach. 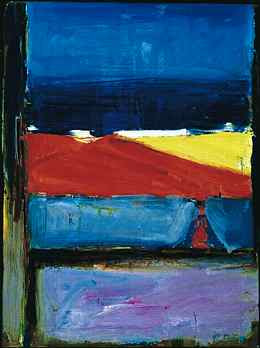 Richard Diebenkorn
Much of the work with Jenny involved building up the surface of the painting using layers of paint and texture. I’ve enjoyed doing this too, and some of this is creeping up into some of my experiments in the studio as I begin to develop some of the work made in Scandinavia with greater conviction. Some of these are also influenced by the paintings of Richard Diebenkorn, who has appeared more seriously on my radar of influences lately. A recent visit to the studio by artist Hugh Marwood picked up on the shared ‘zones’ of colour (a major trait in Diebenkorn’s paintings, as well as the layered surfaces) and tonal banding in the motorway and Scandinavian paintings, which I found an encouraging connection. It’s helped me pick up and start to take these things on as a starting point. Liz Hawley, the arts consultant I’m currently working with, also commented last week that the Scandinavian paintings were also just as rooted in the edgelands, both geographically and psychologically, which I hadn’t been seeing. This feedback is great and spurs me on.

I went with Liz to see a small exhibition of painting at Nottingham Castle last week. The work was from the studios of local Nottingham painters, and had some great qualities and a serious engagement with the media on one hand, but much of the style and subject matter however, seemed to epitomize much of the concerns currently floating around: a deliberately off-handed, loose handling built on naïve illustrative drawing and lots of images of animals or creatures involved in some obscure narrative setting- a bit folk arty and a bit quirky. A bit predictable too. Still, it was good to see evidence of what appeared to be a more vibrant and collective painting scene than exists in Birmingham. 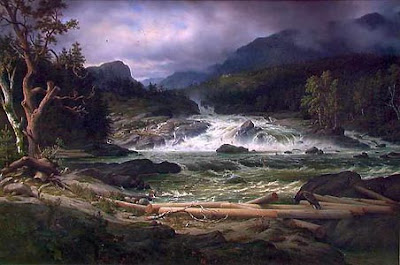 In November, I visited the Thomas Fearnley exhibition at the Barber Institute of Fine Arts. Fearnley was a Norwegian painter born 1802-1848, and toured Europe painting spectacular landscapes of the fjords, mountains, glaciers, forests of Scandinavia and Western Europe. It obviously had appeal because of my recent trip to Norway, but the exhibition also featured many of the ‘plein air’ studies painted by the artist. Much is made of the seeming ‘freshness’ of these in compared to the larger studio works, but I never see much point in this: of course they are fresher and contain a spontaneity simply because of the circumstances of their making. The studio works are a different beast altogether, and need to be if they are going to become their own thing. I liked the larger works: they contained a vigour and charge which seemed forged into a unique and individual vision.

Thomas Fearnley
The same could be said of the Fiona Rae exhibition over at New Art Gallery, Walsall which I also enjoyed. Full of complex and playful formal ideas, these large scale and colourful paintings really celebrate the endless possibilities of painting as a continuing creative mode of expression. 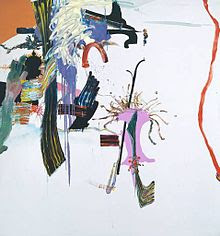 Fiona Rae, 'Untitled (Yellow), oil and acrylic on canvas, 1993
I’ve seen many exhibitions of Rae’s work over the years, and I must admit I prefer the qualities that seemed to exist in the earlier works, where the skidding and slipping marks seemed to possesses a less self-conscious autonomy, than the ones on display in Walsall which feel more deliberately constructed or ‘built’. There were two paintings though, a little smaller than the others and better for it, which seemed to have been over-worked, more heavily-laden with paint and surface, that tipped into a more uncomfortable, almost ugly state of being that I thought were much more interesting. Their scale seemed to confront you more at eye-level which I found unsettling and gave them a much more powerful presence in the room. I’m thinking a lot about scale at the moment…. 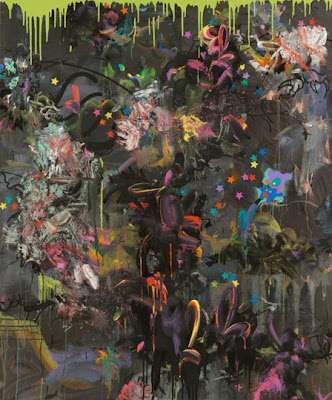 'As I Run And Run Happiness Comes', Fiona Rae, oil and acrylic on canvas, 2009

I've been revisiting Counting Crows' 'August and Everything After' album lately. It's on heavy rotation at home, in the studio, and on the i-pod. With sublime songs like 'Round Here', 'Time and Time Again', 'Rain King', 'Sullivan Street', and well, all of them basically, it just seems the perfect record to lose myself in the last month or so...
Posted by shaun morris at 23:19 No comments: