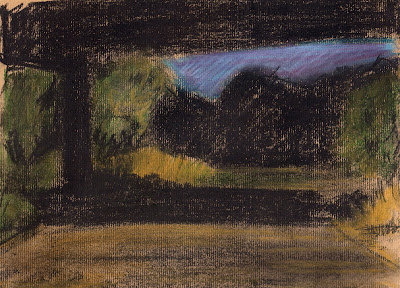 I was out drawing on location last night. I was working in a spot I’ve been returning to on and off for years just under the M5 motorway outside West Bromwich. It’s interesting for all sorts of reasons, including the way the road, river, and rail all cross over each other there. It’s quite a bleak spot, and the railway crossing has seen a number of suicides over the years, and not the safest place to draw (I was firmly locked in the car with my sketchbook).

I’m fascinated by the huge structures that form the underneath of the motorway and the atmosphere of the place . Last night I was trying to develop some drawings I’ve made of these for an idea I’ve had about doing some nocturnes of this particular landscape. These are partly inspired by my memories of walking under these structures as a shortcut on my way home in the dead of night as a teenager from a night out or band practise. It was always a foolish thing to do, and drawing there last night I relived some of these feelings, but was really excited by the light and colour and my attempts to capture these. 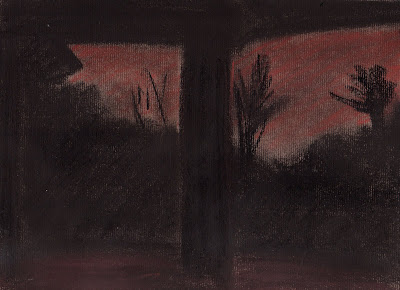 I was listening to Springsteen’s ‘The River’, as I drove over. I particularly love the track ‘Stolen Car’, and have often imagined that the words of the character in the song are whispered from a location similar to this one. What a beautifully sad song…
Posted by shaun morris at 21:55 No comments:

I found the coverage of the Joan Mitchell retrospective exhibition at Inverleith House in Edinburgh on last night’s Culture Show really interesting (although that presenter is a bit irritating). 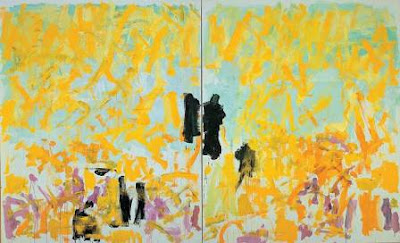 Joan Mitchell, 'Cypress', oil on canvas
I’ve been a bit of an admirer of Mitchell’s paintings for a few years and always really enjoyed them whenever I’ve seen them (they have a great one at Tate Modern), but have never known much about her and neglected to look further. Which apparently is not surprising according to last night’s feature. She is often overlooked when the Abstract Expressionists of which she belonged, and more than held her own in the notorious Cedar Bar fights and drinking bouts, are discussed. She was also, it is said, terrible at discussing her painting (but isn’t everybody? And those who can do all the talking are often the ones that can’t do any of the making in my experience…).
And yet I’ve often had a sly eye on these wonderful paintings, and certainly held them in my mind, when I’ve been developing my more painterly nature paintings in the last couple of years. Mitchell’s work, although almost entirely abstract, based a lot of it’s inspiration on her relationship with the natural world and used this a s a vehicle to express a range of different psychological states. 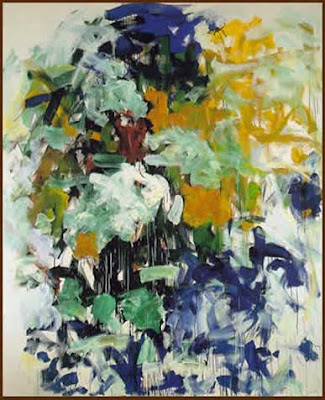 I’ve found myself doing this too, but one I’ve found surprising to be exploring as I’ve tried to avoid psychological readings in my work, claiming the ideas in them are purely visual ideas. It’s only in retrospect that I’ve realized how deeply psychological some of the recent work I’ve created is, and how richer the work is for this. The Joan Mitchell paintings in their power and beauty have invigorated in me an underlying desire to push this aspect further across all my work. I think I’ve been afraid of this in the last ten years as I’ve tried to create some distance with my previously heavily narrative paintings which had lost all meaning for me. But changes have crept in without me being too conscious of them, which it is time to take further… I think I’m ready to get out of my comfort zone and some of the corners I’ve painted myself in….

Posted by shaun morris at 20:35 No comments: 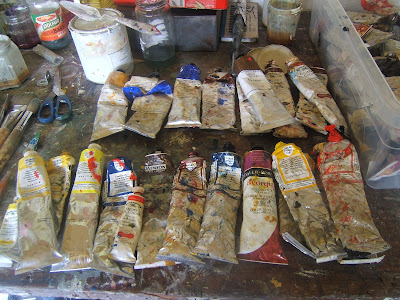 I went for a walk in the Wyre Forest today with my wife, Diane and our son, Isaac. Despite the rain, it was great to get out. We all love the outdoors. I was glad of the opportunity to clear my head, after an intense day painting yesterday amongst the turps, linseed and oil paint of the studio. I completed a new portrait, ‘Rayhana’, that is a follow on from the previous one, ‘Safeera’. Again it depicts a young Muslim woman, and was an attempt to develop the formal ideas explored in ‘Safeera’. I’m going to try and develop these into a bigger, more unified, series over the next few months. This is something I haven’t done in a long time. The next painting won’t be part of this though. I’ve got something else in mind based on some mono and relief prints I’ve been playing around with in the evenings this week. 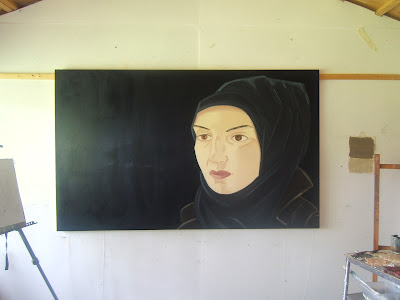 ‘Crispy Realisation’ is a line that comes from one of the songs on Bon Iver’s ‘For Emma, Forever Ago’, which I've obsessively played in the studio for over a year now at the start of a day’s work. I love it, and that phrase jumped out and stuck in my head yesterday. I also listened to Bob Dylan’s ‘Blood On The Tracks’, which must be one of the greatest collection of songs ever recorded. I’ve previously blogged about rituals and superstitions, and yesterday when listening to this I was reminded how a few years ago I painted a series of ten portraits where I found myself ritualistically playing this album at the start of each painting session. It was the start of a much deeper relationship with Bob’s music, that I’ll probably blog about more at some point. I’ve spared you this so far…
Posted by shaun morris at 21:51 No comments: