oil on canvas, 60 x 120cms, 2015
I finally completed this painting the other night. I’ve been working on it for several weeks.  It seems to more fully represent a break with many of the ways of working I’ve developed over the years, namely the idea of trying to paint much more directly, with paintings completed in one day. This has always followed much preparation I hasten to add.  I’ve wanted the paintings to look like they have almost arrived fully formed, spare, and with almost with very little discernible effort involved; not heavily laboured over like a lot of painting, as if this makes it look more ‘serious’ and ‘worthy’, qualities I dislike. I like things simpler.  I have wanted very few elements in the picture, but each one of them has an important place. Take one away, and the whole thing falls apart. Although I don’t want you to feel or see this in any obvious way, it all requires quite a bit of effort and labour. 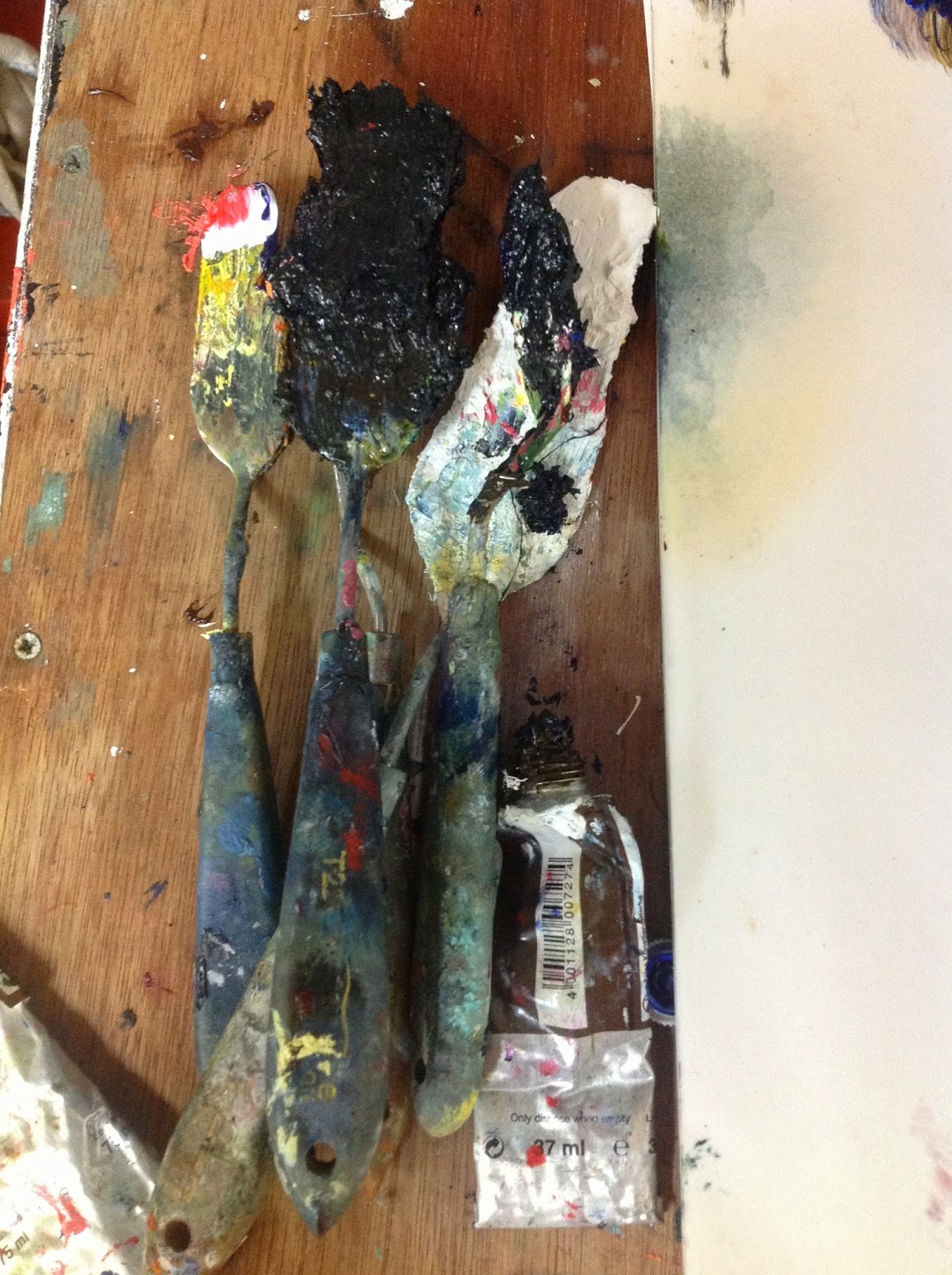 Well, now I’ve written that down, I wouldn’t say I’ve broken with much of that on reflection (!), but the application of paint and the surface of this particular painting are quite different.  It has been built up in many thin layers of paint over a green and red ground, the remains of a previous attempted painting, wiped away again. This ground has been significant in helping me become less precious and controlled about how I paint, as I have just found myself exploring more playfully the process and effect of adding different colours to this; using different types of brushwork; rubbing the paint off and enjoying the staining and effect of the mark making and colour left behind; and re-drawing the vehicle. I’m not quite sure what this vehicle is, but I’ve passed it several times in fascination at its strange, expressive form. I think it is some sort of road mending machine (I’m sure someone could tell me. Hugh?).  I’m not really interested either; it is the image of it by the roadside that I have been drawn to, for several years now actually. It somehow reminds me of something out of Star Wars. It is always in the same place just outside West Bromwich, underneath the motorway.  Now I’ve started painting these Lorries, I found myself taking a photograph of it at night on the way back home one evening on my phone again. This was a starting point, and my poor photo, which lacked much detail of things like the tracks and wheels, was ok to start with, but it did eventually only take me so far. Even though the finished painting still lacks detail, I found myself having to take another photograph in the daytime, while my wife and kids sat patiently in the car (another great day out with Daddy!). I just felt like I needed to know and understand better what was there and then decide what I wanted to do with this. 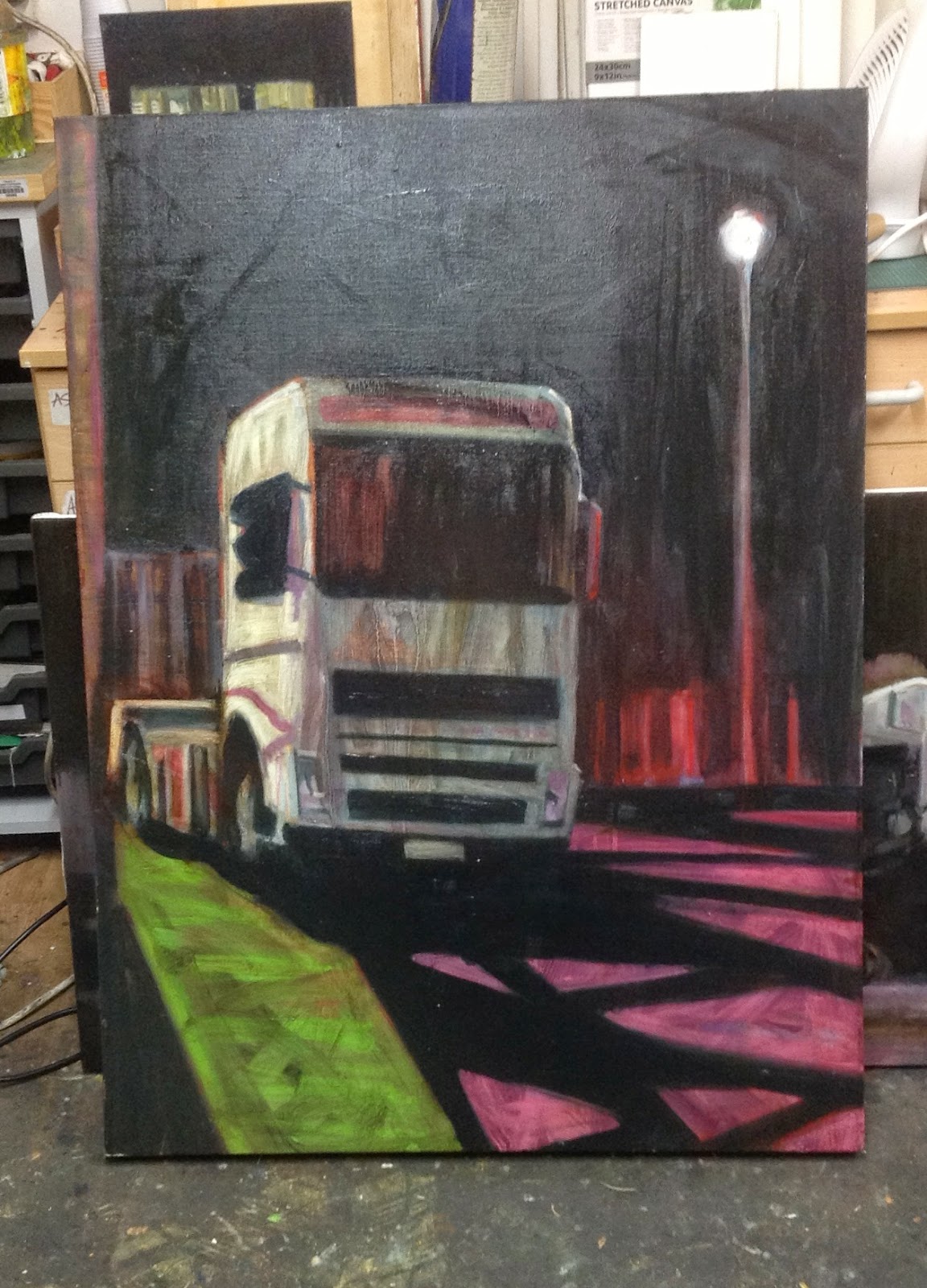 It made me want to revisit my last Lorry painting again and open that back up. The next night I did just this by painting some washes of umber, red and blue oil paint over it very freely and rubbing some of that back etc. The truck now looks more like it has been wiped over with an oily rag which I think is much more interesting.  I also did this with this larger painting, but I haven’t finished with this yet. I’m now thinking this should go so much further.

I’ve really enjoyed working on this and am keen to keep moving to see what will happen with the next one I make. I finished painting it to listening to the wonderful ‘Abandoned Cities’ by Harold Budd, which seemed to capture the mood. I think I’ve mentioned this record before.
In the last couple of weeks I’ve managed to secure a solo exhibition at the Artrix Arts Centre in Worcestershire for a month in January 2016 which has great big walls for big paintings. I’ve exhibited there back in 2006 and enjoyed it. I can’t wait to see what some of my new work will look like there. 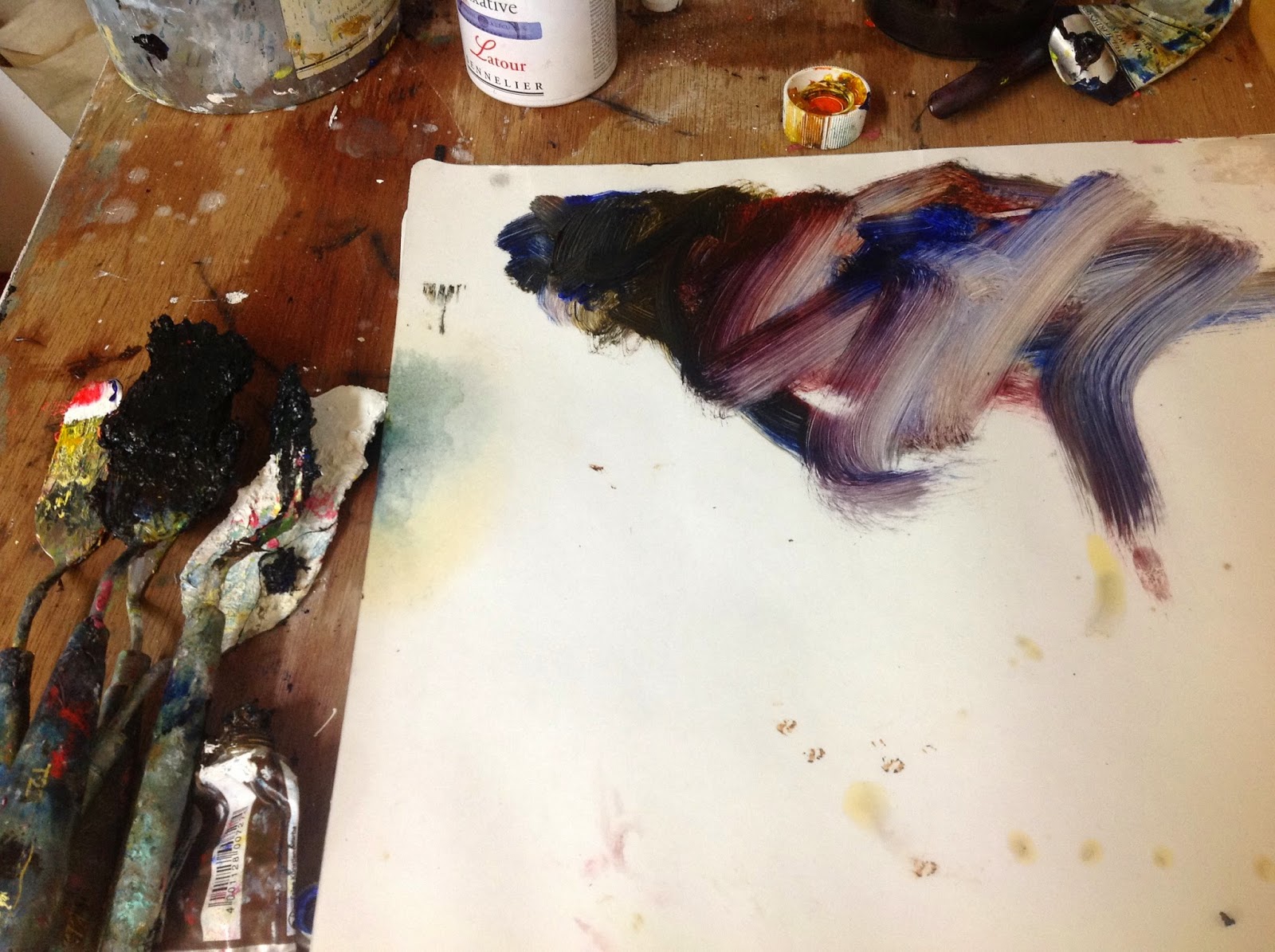