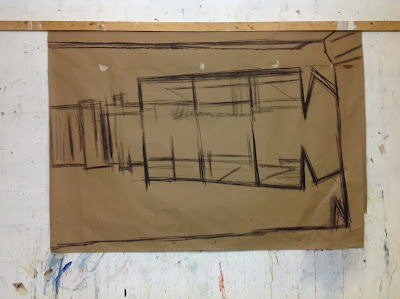 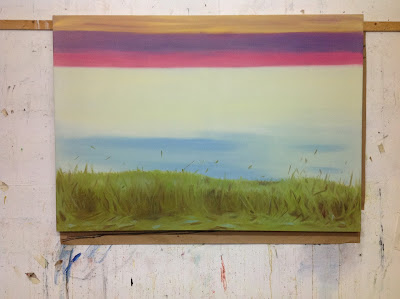 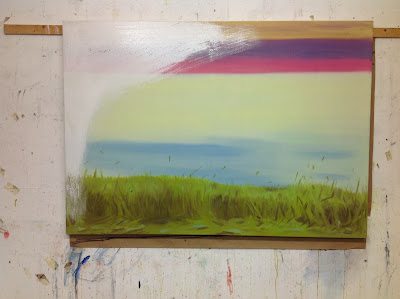 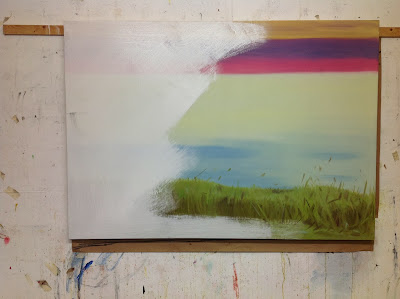 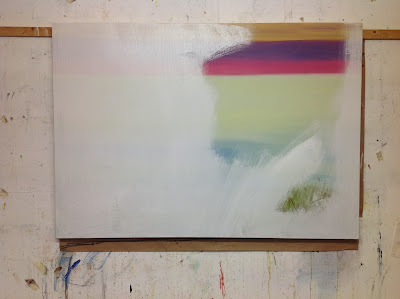 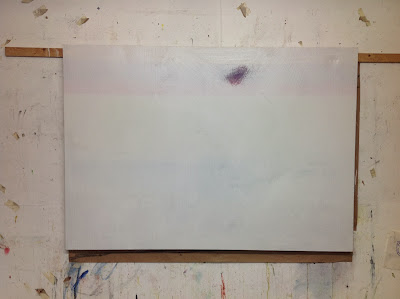 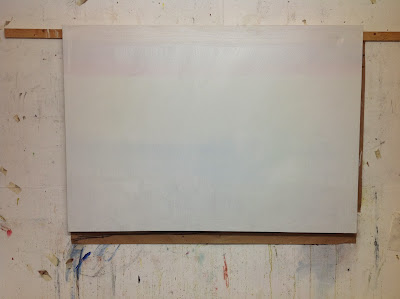 Posted by shaun morris at 10:07 No comments: 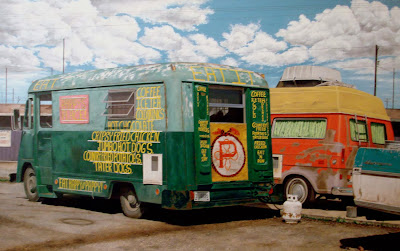 John Baeder, 'Pappy's Place, Nashville, TN', 1985, oil on canvas, 76 x 121cms
I visited ‘Photorealism: 50 Years of Hyper-Realistic Painting’, at Birmingham Museum and Art Gallery’s Gas Hall just over a week ago, in between the Christmas shopping. It’s the first major large-scale retrospective in Europe devoted to this art ‘movement’ and features celebrated artists such as Birmingham-born John Salt and Chuck Close, in what is being seen as a ‘real coup’ for the city. Surveying the work of the major US artists considered to have developed the style, the exhibition includes the large-scale hyper-realistic paintings of American life with which Photorealism became famous. 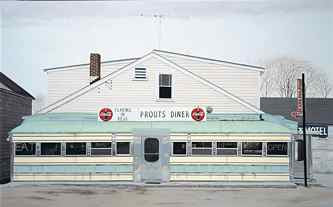 John Baeder, 'Prout's Diner', 1974, oil on canvas, 76 x 122cms
It is with some trepidation that I bought my ticket, not being overly interested in photorealism, as, like a lot of painters, you can be left wondering ‘what is the point?, other than showing off your fancy-pants skills at being able to brilliantly copy from a photograph. Many of my students can copy from photographs really well too, and I spend quite a long time persuading them not to, showing them different examples of drawing and painting. But as so much painting over the centuries has been about exactly the same, and I’ve still really enjoyed it (I’m thinking of Dutch Seventeenth Century Still Life Painting, for example, and the way lenses were used by painters long before the invention of the photograph to ‘project’ an image onto the canvas, in much the same way John Salt makes his wrecked car paintings today). Once inside though, I was hooked straight away by the images of the bland, Middle American landscape, by artists such as Robert Bechtle and John Baeder, whose paintings, the former’s work possessing an almost David Lynch like quality, and the latter’s nostalgic obsession with the American diner, I particularly enjoyed. 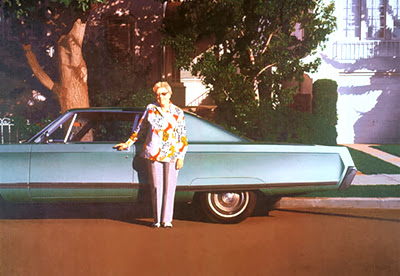 Robert Bechtle, 'Alameda Chrysler', 1981, oil on canvas, 122 x 175cms
There was something about their deadpan, often frontal, compositions, with the geometry of the buildings and roads that chimed with me, as well as the unglamourous settings of the worn-out diners, the banality of the advertising placards, the tired, parked cars and rusty trucks. Despite the seeming banality, they seemed to have much more individual character as places than the modern Western urban landscape of America and Europe today, where everything looks the same in our ‘out of towns’: same type of architecture and planning; same branded shops and restaurant chains, whether you are in Widnes or Albuquerque.  I have liked Ralph Going’s diner still lives for a long time, and have been influenced by their subject matter in my own still life paintings, so it was nice to see an example of one of these: a large painting of sugar shakers and bottles of ketchup and mustard etc. They were very reminiscent really of the attention to detail and realism of the earlier Dutch painters I’ve mentioned, and in all the work of these earlier artists, I wasn’t really thinking about the use of photographs, they seemed more like good, realistic paintings and not as slick as anticipated, it was these other qualities of the subjects and the unusual compositions, I was really attracted to. I could however, see what an affront that would have been to the other art being made in the late 1960’s and 1970’s, when they first appeared, and how shocking they would have been to seemingly more sophisticated, art-world sensibilities, which also appealed to me. (In the landscape mentioned, I was also reminded of George Shaw’s paintings of Coventry’s Tile Hill). 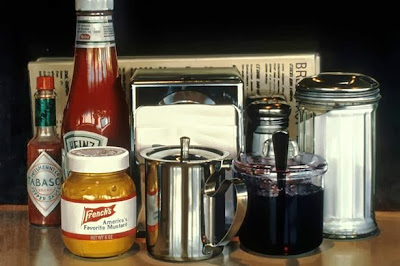 Ralph Goings
Moving through the exhibition, some things struck me as just being plain weird, such as the horse and cowboy paintings of Richard Maclean, which you could never really say had any real sense of reality about them.  I loved the paintings of empty interiors by Jack Mendenhall, which were apparently copied from interior décor magazines in the 70’s. There was something in their framing, sterility, and their inoccupation that was very unsettling and gave them a psychological charge that reminded me of Rick Moody’s/Ang Lee’s ‘The Ice Storm’. I also really enjoyed the gaudy, over-sized still life paintings of children’s old-fashioned toys and pinball machines by Don Jacot. I also loved randy Dudley’s industrial landscapes. But then, when it came to representations of figure my interest in the exhibition started to wane rapidly.  There some awful paintings of the nude and some portraits of pretty, filigree-like girls by the lake or in the woods, like some slightly inappropriate middle-aged male fantasy. The Chuck Close paintings were terribly out of place amongst this too, largely because they are so much tougher conceptually, but also are about ‘process’ and the materiality. Close also famously hates being associated with Photorealism, and the paintings here had little to do with anything else on display, nakedly displaying the grid, which supports his experiments in constructing the portrait. 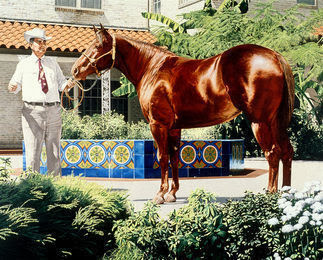 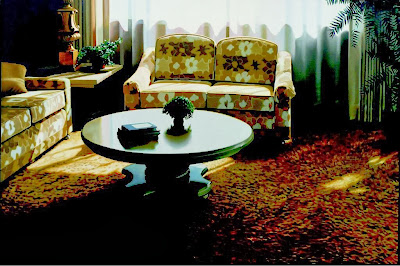 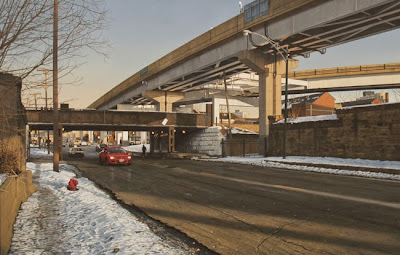 Randy Dudley, '18th Street Near Wentworth', 2009, oil on canvas, 23 x 74cms
The exhibition then lead to more recent cityscape and architectural paintings of famous cities such as Venice, Paris and Las Vegas, which just seemed devoid of any of that psychological charge and conviction I had enjoyed in the earlier work. David Parrish also echoed this in his countless, fetishist paintings of shiny motorbikes and cars. I was finally left wondering ‘what is the point?’ other than the technical display. It had all suddenly seemed to appear so empty. Next to the motorbikes, were two far greater paintings of wrecked cars by Birmingham born John Salt, whose work seemed so much stronger, with its coherent urban grit. 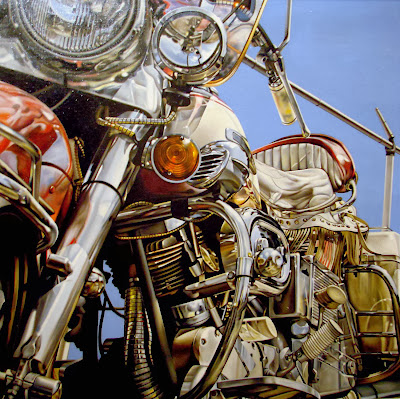 David Parrish, 'Butler Terrace', 1973, oil on canvas, 138 x 138cms
I left the exhibition dismayed by all the later stuff I’ve mentioned, and the exhibition definitely seemed like a show of two halves. And yet in writing this I realise how much I had enjoyed the earlier generations of artists and the images represented. There were many connections to be made with my own interests, especially in terms of the subject matter, that I hope to explore further, and maybe visit the exhibition again in the coming weeks. 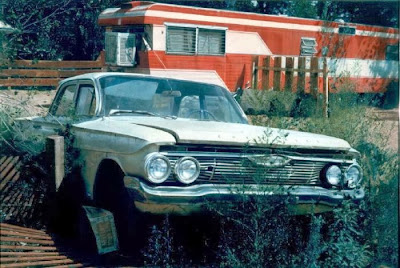 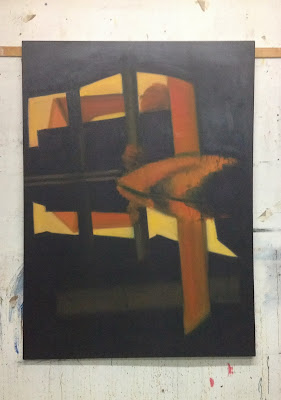 'Nightime', oil on canvas, 150 x 100cms
I made this new painting the other day. I’m really pleased with it. It seems to bring together many of the concerns I’ve been exploring about the canal and the motorway, but also nudge things along a bit. I hope it has some of the more ambiguous and mobile poetic qualities I’ve been trying to tap into, influenced by Roy Fisher’s poems about his journeys through the Midlands landscape, often on the canal.


All my compositions are carefully planned out beforehand, for all sorts of reasons. One being to achieve a perfect balance of elements in the drawing, which takes a lot of consideration, especially to achieve something that does not feel too forcefully ‘considered’ or ‘perfect’ or ‘balanced’. Time too is a factor, as I like to execute the paintings quickly, and avoid any sort of laboring with the drawing, allowing me to just concentrate on the act of painting when it comes to it. The drawing is the scaffold that allows for this. And, in a rather banal way, because of the lack of time I have to make work, working for several evenings on a drawing feeds my need to be in the studio making stuff, thinking and exploring, until an opportunity presents itself to tackle a large painting like the one above. 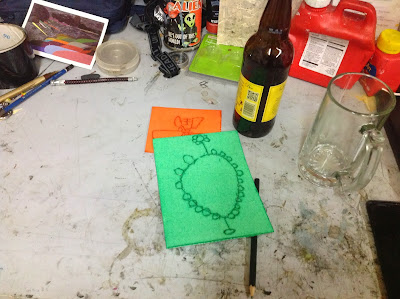