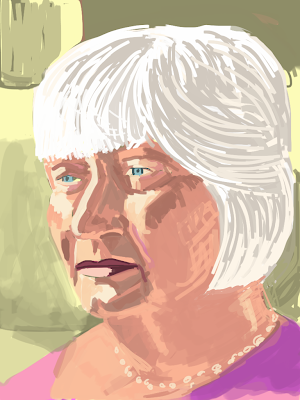 'Susan', I-Pad painting
I took my exhibition down last Friday. According to the gallery’s own visitor counter, I had 1052 people pass through the doors to view my paintings, which is pretty good. I also had some really positive comments about the work left in the comments book, which makes you feel that the work has reached out and communicated to an audience in some way. Still, it has been a rather exhausting few months with this and the "If A Picture Paints a Thousand Words...' exhibition in November. It feels like a weight has been lifted in the studio, where I just want to play. I need a break from this sort of activity for a while....

After all this work around the landscape in recent months, it was strange to head up to Slaithwaite on the edge of the Yorkshire Moors yesterday to make a drawing for a portrait commission I’d been asked to do. I have made very few portrait paintings since launching this website in 2008, apart from the ones I do at the college Arts Festival. Immediately prior to this I had just completed a commission for my college’s prestigious new building, where I made four mural sized (8ft x 12ft each) portrait paintings in just six weeks. The experience nearly killed me, and was extremely stressful, but was balanced by the wonderful opportunity to make some site-specific work and paint on a large scale, which was great fun. However, that summer I literally worked every minute I had on those paintings right up until the last minute they had to be finished. Since then, I haven’t felt very inclined to make any new portrait work. 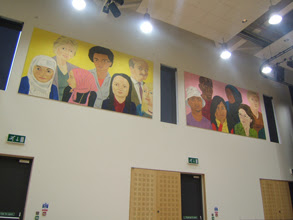 But yesterday, having toured the north of England and the Yorkshire Moors lost in the dark travelling up the previous evening, I hit the north to make a drawing of Susan who had ‘won’ the opportunity at the ‘Culture Club’ she attends to have her portrait painted by yours truly. ‘Culture Club’ is a small group of older people who attend and participate in various arts and cultural events which is run by a arts in health organization called The Open Art Project who I still have contacts with, having been a founding member of the project some (gasp!) eighteen years ago.  Open Art is still going strong and is a well established arts organization in West Yorkshire now with many different strands to it. 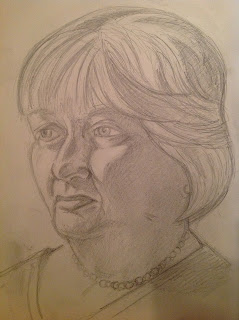 Despite lots of experience of making portrait drawings in allsorts of places, it is still a nerve-wracking experience for both the sitter and myself (which is how it should be). I worked with Susan at her home in Slaithwiate (or Slawit as it is known in Yorkshire), with her husband also present. I really enjoyed meeting Susan, who was a lovely woman and listening to her Yorkshire accent as she talked about her life and family. I completed a detailed pencil drawing, and a painted study on the i-pad over three hours. It was quite intense, and I felt mentally drained as I headed back south on the motorway. I could tell Susan and her husband were unconvinced by her likeness in the drawing, which made things a bit awkward, but I wasn’t. After three hours staring at someone, a deeper record of their features does get etched in your memory.  I’ve just got to prove that to her with the finished portrait which I will make in the next few weeks. It had been great to be back in Yorkshire, albeit just for the day. Watch this blog to see how the painting progresses….

Posted by shaun morris at 21:30 No comments: 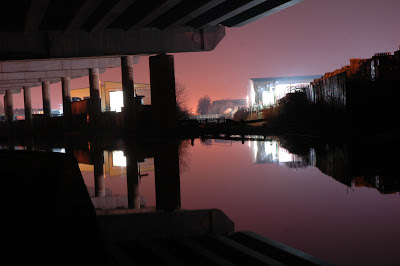 I returned to the location underneath the M5 just between Oldbury and West Bromwich, which I posted about in January, to take some nocturnal photographs as possible starting points for paintings last night. I went with my photographer friend and colleague, Laura Gale, whose expertise and equipment, and her enthusiasm was invaluable. I just directed! Not unlike the location in my other paintings, it is very nondescript and hidden, easily passed in the car, but as you go under the bridge you enter a very intense, visually rich and murky world, that is at once quite frightening in it’s scale and darkness and with the noise of the traffic above, yet simultaneously beautiful and otherworldly. This otherworldly quality was further enhanced by the still water of the canal and the enormous, crystal clear reflections of the underbelly of the motorway. It looked like you were viewing a giant sunken ship in the water. It was quite deathly and unsettling. We took loads of photos in about two hours in the cold, and I’ve come away with a thousand ideas. 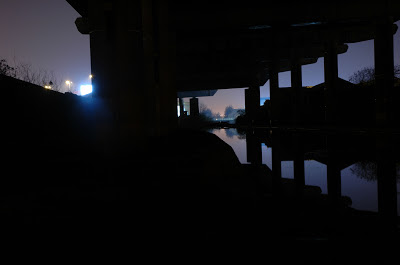 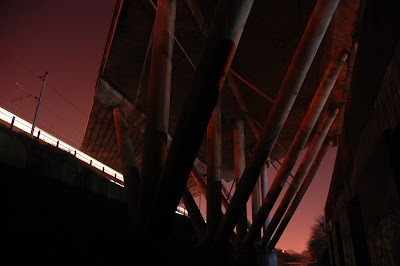 As we walked back to the car and drove away into the relative normality of the Smethwick night, I think we both felt like we had just visited another planet. It had been an amazing night.

Posted by shaun morris at 20:32 No comments: