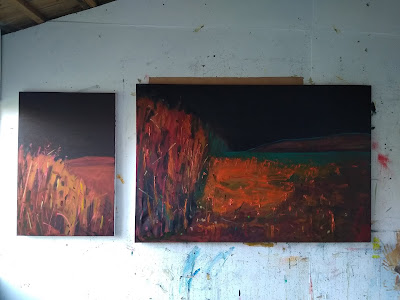 Current work in progress
I spent last week, over 2 evenings and 2 days, making some of the larger paintings as discussed in my last post. They are based on reference photos and sketches made at Billesley Common, a nearby walk where I was taking Buddy, my dog, each evening for a while. 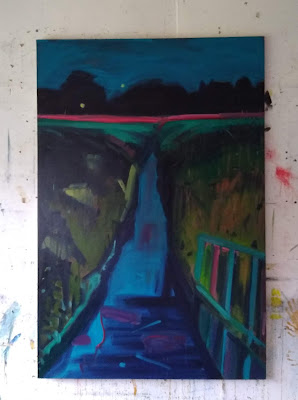 Current work in progress
I returned to take the actual photos when it was much darker later in the evening, after spotting some potential in some of the features of the landscape, in particular the path cut through the long grass to the open ground which fades into an all enveloping darkness beyond, and in the final painting, the small river, turquoise in the disappearing light, that slices through the bank either side.

I have provisionally titled them ‘County Lines’, which was a title in my head as I worked on them, and in the early gestation of the idea of developing something from these images a few months ago. This came out of a safe-guarding presentation given before the start of term by one of the Pastoral Managers at the college I lecture at who has strong links with the community we work with, which is in one of the most socially deprived areas of Birmingham, and indeed the country. He discussed the increasingly commonplace criminal practice where vulnerable young men are used by drug gangs in inner cities to infiltrate rural towns and villages to deal drugs, crossing the ‘county lines’. He explained how last year he had supported a student who had found himself trapped in this practice by a local drug gang, who had threatened to harm him and his family if he reported it to the police or anyone else. The boys who are often preyed upon to conduct these crimes are teenagers aged between 15-18, often with special educational needs at school and therefore more socially isolated and vulnerable. It’s a profile that could easily be applied to my own son, and as I sat there listening to this presentation in early September as he started secondary school I couldn’t help feel a growing sense of dread and anxiety about the continual challenges he may face as he grows older. I carry these feelings around with me daily. 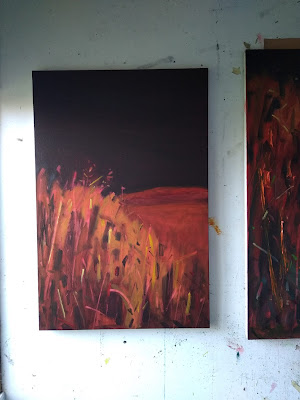 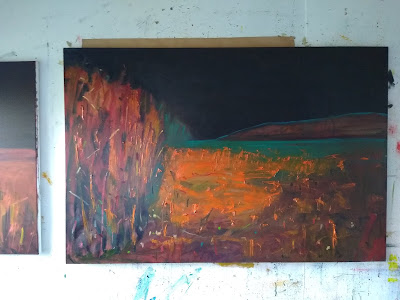 So the paintings I’m working on- I have one more planned-are not literal representations of this issue of county lines, I wouldn’t know where to really start with that, nor would I wish to, but more of a visual metaphor and an attempt to represent some sort of place of uncertainty and fear after dark, for some of the feelings I hold for me and my family, and for the idea of the dark criminal activity that is often hidden, but lies just beneath the surface of most of the communities we live in, whether they be in the city, the suburbs or the rural village. Many of my recent paintings, the ones of half-hidden vans in late-night garages, or scenes that deal with the locked-up exteriors of buildings, or hidden interiors are an attempt to allude to this sort of reality. 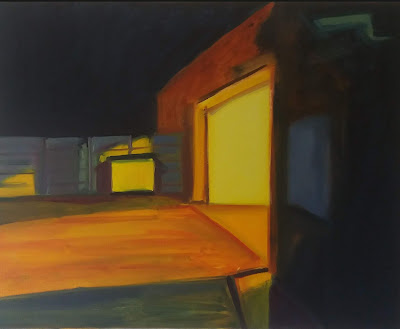 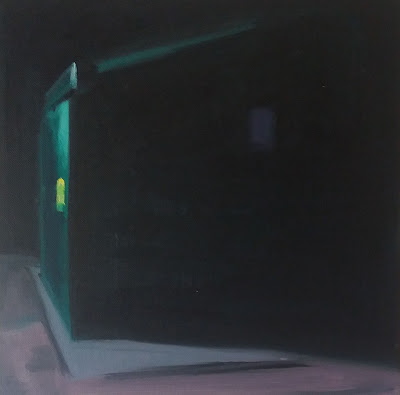 'Lock Up', oil on canvas, 2019
As I write this, I have also been working up an idea for a very large painting based on some recent powerful photographs I took of an enormous lorry and its trailer at a service station on a dark, wet and rainy evening when returning by coach with students from London. With last week’s horrific news of the discovery of 39 bodies of immigrants being trafficked in a similar vehicle I couldn’t help think the painting I hope to make could hold a very different grim and terrifying resonance and tie in with some of my current thinking, rather than just potentially being seen as fairly romantic images of the road and lonely truck drivers….

Posted by shaun morris at 22:01 No comments: