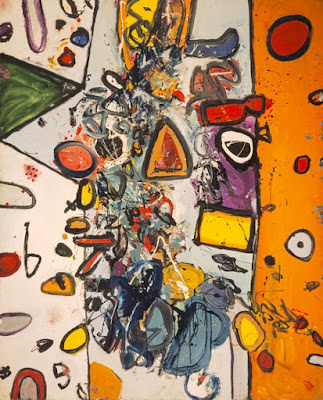 
I travelled to Huddersfield last Sunday morning, leaving very early, to deliver a painting that I have sold to a friend and ex-colleague who now lives there. I know Huddersfield and the surrounding area of Kirklees well, having lived and worked there, and indeed studied there for my Teaching Diploma, with a teaching placement at Bradford and Ilkley Further Education College, over 20 years ago. Many of my paintings as a graduate and post-graduate student were inspired by the nightlife and culture of this corner of West Yorkshire.  Memories, both good and sometimes very difficult, came flooding back as I left the M1 and headed across the steeps hills and valleys to the town. 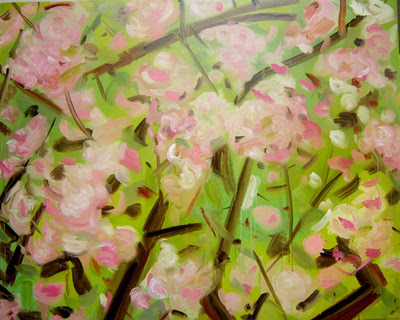 Shaun Morris, 'Spring', oil on canvas, 2008
Anyway, I’m pleased to report that my friend was delighted with the painting for his very large new house. It was a painting, ‘Spring’, I had made over 10 years ago and had exhibited at the college, which is how he remembered it, but I had since taken it off the stretcher and rolled up to re-use the stretcher for another painting. It was one of my first attempts at doing something more inspired by the landscape after 10 years of portrait work, and I always liked it and thought, or hoped, it might find a home. After getting it re-stretched and touching up some of cracks that had appeared from it being rolled up, it was nice to see it restored to life and find a welcome home after all this time. I made the painting during the months when my brother was dying from cancer, and the piece, as well as others made during this period, has lots of memories locked into it from this difficult time. The act of painting itself became really important to me in helping me process some of the pain from then. 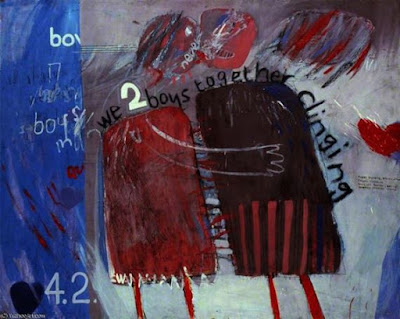 David Hockney, 'We 2 Boys Together Clinging', oil on canvas, 1961
Before heading home again I called in to Wakefield’s Hepworth Gallery, which incidently is located where I had a studio during my time there long before the impressive gallery was built. I was keen to see the exhibition ‘Alan Davie/David Hockney-Early Works’, which was a large show that exhibited many works by these two painters and printmakers together in ‘dialogue’. It examined the influence the early abstract works by Davie had on a young Hockney after the younger artist saw a retrospective of ten years of Davie’s paintings at Wakefield Art Gallery whilst he was still in Bradford about to head to the RCA. This experience consequently informed many of the early more painterly, formal experimental paintings, often incorporating words or found text, that Hockney made at the RCA, such as ‘We Two Boys Together Clinging’, which was exhibited here, and with which he began to make his name in 60’s London. 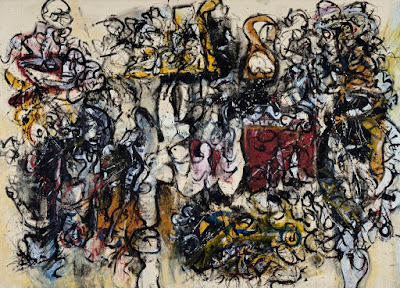 Alan Davie, 'Creation Of Eve', oil on canvas, 1956
I enjoyed the show a great deal, and although I admired the clever formal playfulness, and the passionate directness of his depictions of his homosexual identity, which I’ve always thought were very brave for the period, it was the sheer visceral energy of Davie’s large canvasses which really excited me. The spontaneity and improvisations behind them, influenced by his love of Jazz- Davie was an accomplished Jazz musician-which were also very phallic and sexual with their painterly ejaculations and erotic forms, were very powerful. Davie acknowledged the sexual charge behind the work, and there was a slightly funny film of a very muscular Davie from the early 60’s stripped to the waist striding over his canvas with large brush and pot of liquid paint in hand creating one of the paintings in a very performative way, which made me think about them differently to the usual ‘shamanistic’ quality that is often discussed and associated with his appearance with his long flowing beard. There was also a photo of him sat astride a sports car with a glider, two of his many pursuits, behind him, its wing thrust provocatively into the air behind the artist which made me smile. 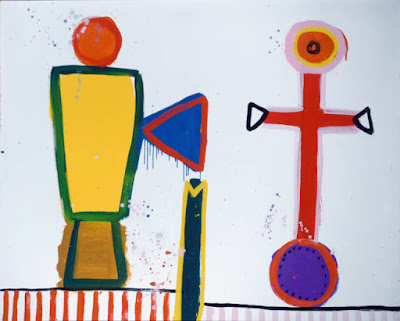 Alan Davie, 'Cross For The White Birds', oil on canvas, 1965
On heading back to my car, I realised what an influence Davie, and other abstract expressionist painters, have had on me, and the development of my own visual language, which could be seen quite explicitly in the painting I had delivered earlier. The performative, spontaneous aspect of painting, attempting things in one go, in the moment, as well as the gestural language of brush and mark, much more so than Hockney.  His work seemed richer in its invention, but not as exciting in the execution. It’s the surface that excites me more, which is why I prefer Hockney’s later works, the Yorkshire landscapes, and directly painted portraits, which I feel have a different kind of a kinship with these paintings by Davie and his own direct way of painting fifty years later. 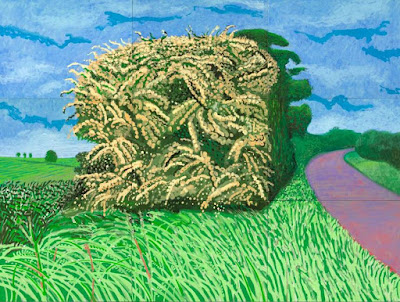 https://www.youtube.com/watch?v=WgPmkoAR76U
Posted by shaun morris at 21:41 No comments: