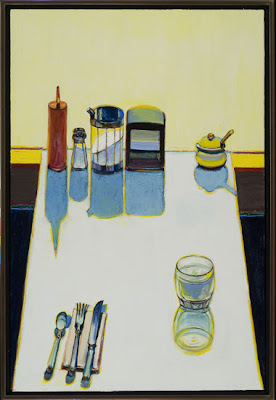 I’m excited to see that American artist Wayne Thiebaud has an exhibition on in London at Faggionato Fine Art. You don’t often see his work over here, so I’m going to try and get down to see this show and view his paintings of iconic American confectionary and San Francisco landscapes ‘in the flesh’. I feel a deep affinity with Thiebaud’s approach to painting which an excerpt from the gallery’s Press Release below demonstrates:

‘Whether a nude, a landscape, or a still life of a man’s hat, the focus is the visual language the works all share…Known as, and frequently referred to, as a ‘painter’s painter’, Thiebaud is less concerned with a naturalistic depiction or a true likeness of his subject, but more interested in solving formal issues. The artist explains: ‘Painting is a series of problems that you are trying to solve-base, colour, design, composition and those intrinsic characteristics, rather than all the things that happen afterwards extrinsically- expressions, individualism, subject matter, iconography. It’s all important, but first and foremost for me is the formal plan’
.…For all its bright modernity Thiebaud’s art readily pays homage to past traditions. While his brushwork is readily influenced by the action and colour field painters, the compositional arrangements look back to Chardin, Manet, Georgio Morandi and Edward Hopper, amongst other heroes’ 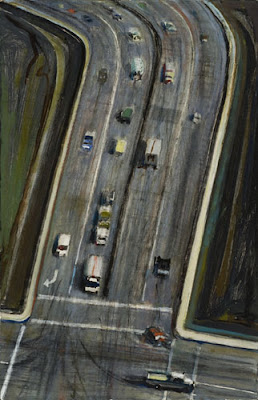 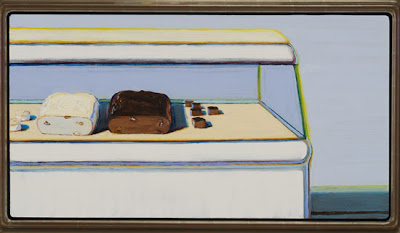 Follow the link for more details. The show runs until December 18th.
http://www.faggionato.com/current/
Posted by shaun morris at 21:40 No comments: 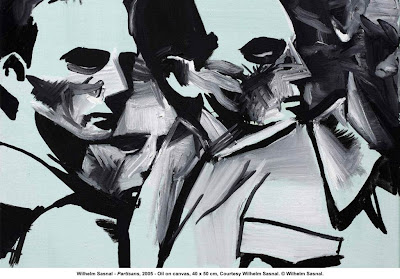 I recently really enjoyed a retrospective of Polish painter Wilhelm Sasnal at the K21 Modern Art Museum in Duseldorf. Diane and I enjoyed a weekend break in this great city a few weeks ago. It was nice to connect with a lot of the German artists that have so often informed my practise over the years; Gerhard Richter, Jorg Immendorff, Markus Lupertz. Many of them teach at Dusseldorf’s renowned art school The Kunstacademie, where Joseph Beuys gave many of his famous lectures. I was delighted to come across the exhibition by Sasnal, as it is the only city it has been planned for.
Sasnal is seen, like many current artists, as a post-Tuymans painter. I’ve seen many reproductions of his work over the last ten years as his reputation has grown and like Luc Tuymans the imagery for his paintings comes from many different sources; often media orientated but also personal photographs, and history too. I admire Tuymans a great deal, but came away from the exhibition that Sasnal was very much his own man. The work was so varied in its source material and also its handling. It was so difficult to define or pin down, and this was partly the point, as you moved from one very different painting to another. There was definitely a clear aesthetic being asserted though and this was what I enjoyed and related a great deal to, as it is one of the motivations behind a lot of my own painting practise.
Another interesting thing about the exhibition was a Study Room detailing Sasnal's biography but which also featured a suite of computers loaded up with albums from the artist's record collection, which when you donned the attached headphones you could enjoy. It was significant in the sense that it represented the music that Sasnal listened to while painting. It offered another dimension and insight to the sensibility behind the work. I really appreciated this, and particularly enjoyed listening to 'Don't Let Our Youth Go To Waste' by Galaxie 500, a record I hadn't heard in ages, amongst many others that ranged from Slayer to The Smiths. Wilhelm had impeccable taste.
I’ve linked to a recent Guardian feature on Sasnal which discusses his work further:
http://www.guardian.co.uk/artanddesign/2009/jul/08/wilhelm-sasnal-artist 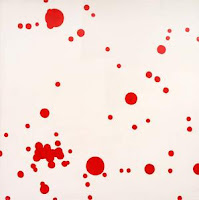 There’s a really interesting painting exhibition on more locally at Birmingham’s Ikon Gallery. ‘Razgulyai’ takes it’s title from the city Russian artist Semyon Faibisovich lives and works. In his huge, heroic canvasses he depicts the city’s many dispossessed individuals, many of them homeless and alcoholic. The paintings are derived by photographs taken by the artist on his mobile phone, and consequently have a weird low resolution, pixellated quality. The shadow of the artist himself looms over many of the subjects, which is a smart reference to how the paintings were created. 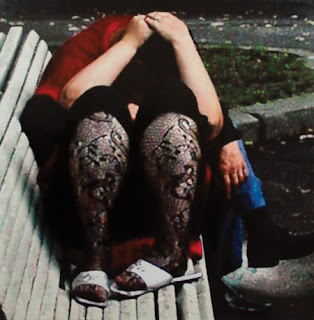 I’ve enjoyed both these exhibitions for the scope of the artist’s visions, and the ambition in their work. I visited some of the region’s recent MA Fine Art graduate exhibitions last month, and felt that these qualities were disappointingly absent. So much of the work seemed so uncertain of itself, almost as if the artist’s were afraid to commit to anything in their practise. Contemporary Fine Art practise does encourage a more pluralistic approach, whereas when I studied one worked more definitely in one of the main Fine Art disciplines, but even so...
Hey, I’m just a painter so what do I know, but I was left wondering how these artist’s were hoping to develop and sustain their future practise. There was a lot to learn from the example in the work of Wilhelm Sasnal and Semyon Faibisovich.
Posted by shaun morris at 18:40 No comments:

Maisie Crow and The Soul of Athens 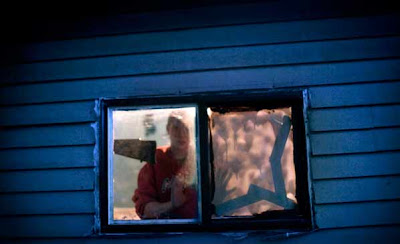 I was recently pointed in the direction of the work of photographer Maisie Crow by a photographer friend. She’s produced some really powerful photography, such as the one above,and video work, including this one I’ve linked to at the brilliant ‘Soul of Athens’ website. ‘A Life Alone’ is about an elderly guy called Tom Rose, who talks openly and movingly about losing his wife after being married for sixty three years.
I also really enjoyed ‘Lost in Plain Sight’, a series of photographs based on a series of individuals who are not part of the mainstream because of certain choices made or circumstance. They are accompanied by some really interesting notecards by the individuals themselves. I’m not keen on things being too spelled out for me, and these cards hit just the right note between saying so much and yet leaving a space for the audience to enter the story.
Follow the two links to Maisie’s website and the ‘Soul of Athen’s’ one. There is so much to explore at the latter. Thanks to Rachel for the tip-off...
www.maisiecrow.com
http://2009.soulofathens.com/?q=node/48
Posted by shaun morris at 12:01 No comments: