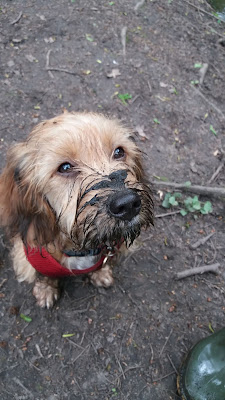 'Buddy'
We recently adopted a little rescue dog, Buddy, from a charity in Cyprus. He’s a lovely little pup with a gentle temperament, and thankfully patient with my two children who can have less than gentle temperaments, and loves to play and socialise. Having a family dog is a nice addition to the family, and I am particularly enjoying taking him for walks and discovering some hitherto unknown little byways and hidden tracks and trails (at least to me, not the many other dog owners we encounter!) in my local area around South Birmingham. Some of these places, with their abundance of wild fauna and flowers, babbling brooks and ancient woodland, and wildlife scampering in the trees and undergrowth, yet just 5 minutes from the congested A roads nearby, could be straight out of Richard Mabey’s famous ‘The Unofficial Countryside’ book. 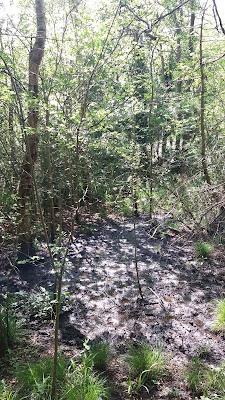 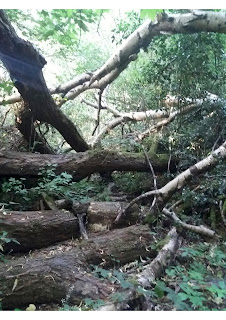 A particularly favourite place we walk most evenings as the air slowly gets cooler, and to enjoy some respite underneath the sheltering trees from the current heatwave, is Moseley Bog. This well know nature reserve, with its connections to Tolkien, is a wonderful dell with some fascinating ancient trees and winding little pathways away from the main route through. Despite it’s relatively small size, and it’s situation next to a fairly large housing estate it’s easy to get lost and to certainly find the solitude many of us need at times, myself included. I really like stumbling into little corners that reveal evidence of previous activity, like the many dens and remnants of fireplaces. There is also a regular population of young Muslim men smoking dope that I regularly pass gathered on one of the little bridges. Either that or young Muslim couples seeking some privacy. In their sportswear, tram-lined haircuts, shades and jewellery and the sheer stench of whatever it is they are smoking, they create a weird adjunct to their surrounds, but are no less a part of the place than the middle-class, wellied dog-walkers that traipse smiling by them. Sadly, a week before I started walking there with Buddy a young guy committed suicide in a corner of the Bog. One can’t help think this tragic event leaves some sort of psychic imprint on a place, and I often think what it would have been like to be this alone person walking through this outstandingly beautiful place to such a dark end. 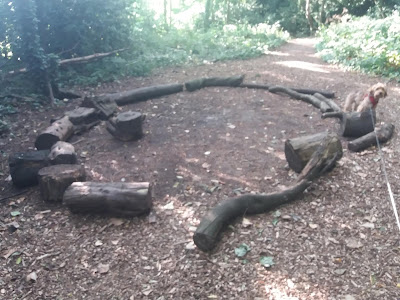 These sights very much remind me of the ‘My Back To Nature’ suite of paintings made a couple of years ago by George Shaw during his residency at The National Gallery, where he explored similar areas of woodland on the edges of the estate. Although I liked these paintings very much, I did also have a sense that some of the paintings seemed rather contrived, such as the scattered pages of porno mags at the foot of trees. Images like these seemed to belong to a bygone era of male furtiveness, which may be the point as is the case with much of Shaw’s work and its obsessive ruminating for the past. I don’t think you would find sights like these anymore since surely the internet is where much of this type of stuff is accessed these days. I half imagined Shaw himself setting tearing out the pages of a copy of ‘Penthouse’ and arranging them for a series of photos to work from, like a stage hand arranging the set of a theatre. 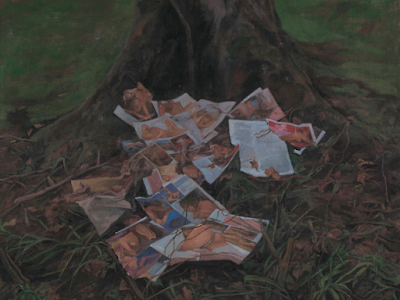 George Shaw, 'Natural Selection', 2015-16, enamel on canvas, 46 x 55cms
Forests and woods have occupied so many of my favourite painters, particularly the American ones who spend their summers along the coastal region of Maine when they spend long summers escaping the stifling heat of New York in the summer. These include Lois Dodd, Alex Katz, and Neil Welliver. I’ve made a few works of my own in the forests of Norway in 2012, but they have not yet developed into anything larger. I doubt they ever will either. It seems so hard to do anything particularly original with the theme, especially with such painting luminaries foreshadowing you. 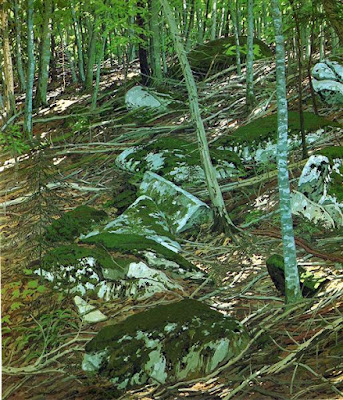 Neil Welliver, 'Evening Light'
Although the suicide at Moseley Bog has occupied my thought on my walks with Buddy and led me to make a few tentative studies for ideas. I’m also keen to attempt some ‘plein air’ painting there. In the meantime, I’m currently back in the cab with some new trucking paintings which seems a more fertile area to create something different…