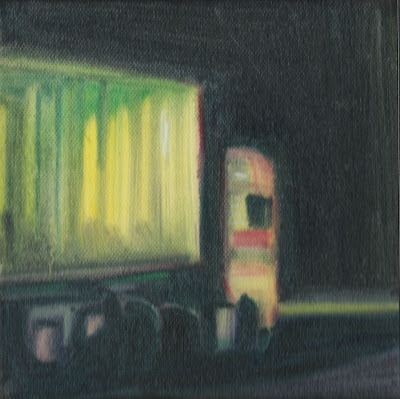 'The Road', oil on canvas, 15 x 15 cms, 2015
Private Collection
I was packing up my small paintings on Tuesday evening in the Upper Gallery at The Artists Workhouse at the end of the ‘A Minor Place’ exhibition when I noticed that there was a red dot on the label for ‘The Road’. My heart beat a bit faster as I went through my box, which I thought I had been packing with this and the other small canvasses that had accompanied it. It wasn’t there but I hadn’t noticed until now. My heart now sank. Not that one, I thought. ‘The Road’ was my personal favourite, one of those paintings that only come along every few years, and a painting I had deliberated for ages about before putting it in the show as to whether I should label it ‘not for sale’.  But I hadn’t and now it was gone.

And I never had chance to let it go personally as it had been sold by Dawn at the gallery just five minutes before the exhibition ended altogether on Sunday afternoon, so it had been wrapped and taken away there and then. I’m aware now of sounding a bit mawkish, and it is great Dawn managing to sell it; to an Australian visitor who lives in Stratford but works in London, the painting reminding her of her commute but also possessing something unidentifiable that drew her in. The same unidentifiable quality I loved about it too. It’s nice that someone else ‘connected’ with it enough to want to buy it.  ‘Just do another one’, joked Andy and Hugh. 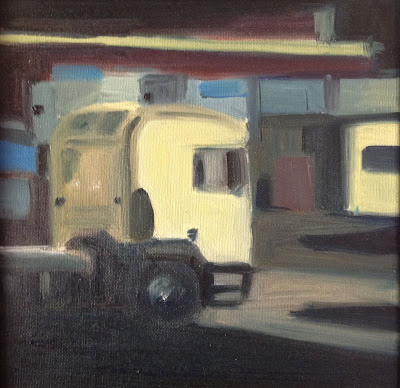 'The Wait', oil on canvas, 15 x 15cms, 2015
Private Collection
I also did a nice swap with Hugh with ‘The Wait’, another favourite from this series, for one of Hugh’s artworks, so now, having sold another in January from my ‘The Lie Of The Land’ exhibition, with this set of paintings being now quite depleted it does feel the time is right to do another one. Or more. It’s always best to look forward, not back.

As Hugh, Andy and I slunk to the pub after packing up our respective artworks, with each of us having sold a few pieces, and the positive reception the exhibition has received, there was a pleasing satisfaction with the whole experience felt between us and a feeling that we had pulled something off, with a little help, that had been really good.

I could write more about it all, but I never took many photos, so I think it might be better to direct you to some great posts by Hugh on his blog about it. He shares some great photos and as ever, some thoughtful ruminations about it all too: