A Kestrel For A Knave... 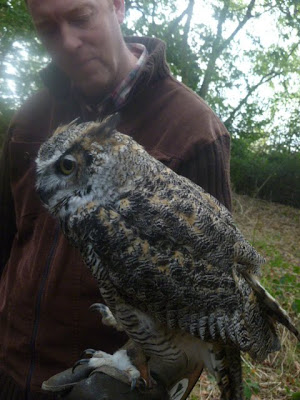 The artist with a Great Horned Owl
It’s my birthday tomorrow, which is not something I normally broadcast, but today I have enjoyed a rather special gift from my wife, Diane that I wanted to share. She, unbeknownst to me until I got there, booked me on a falconry course for the afternoon in the Warwickshire countryside near Stratford. I love birds of prey so this was a dream come true. We spent our time handling the most beautiful hawks, owls and falcons, taking a walk though the surrounding countryside and woods carrying the birds on our arms, and letting them fly to come back to land on our gloved arms. It was so wonderful to be that close up to these magnificent creatures.

It’s not the first time I’ve been so up close to birds like these though. During my ‘Seek My Face’ commission I met up with a falconer, Craig who kept some huge hawks in his house, which was on a rather tough estate in Great Bridge. I remember walking up his front garden to meet him for the first time for our sitting to be confronted by these two enormous hawks on perches, looking rather formidable. One of them was a goshawk, which today I learned is one of the deadliest hunters of all the birds of prey! Sitting in Craig’s kitchen trying to draw him with one of the birds on his arm was a surreal experience to say the least (but rather special too 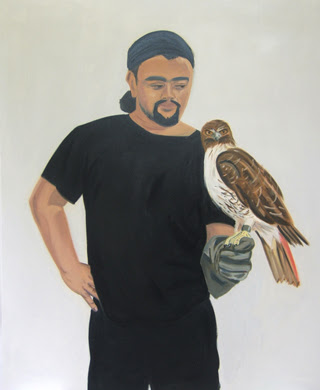 Craig, oil on canvas, 150 x 140cms, 2007
I returned to Craig’s house a couple of weeks later to take some photo’s of him with the bird to help me with a possible painting. Before visiting I called him to check the details, only to be told, ‘Oh, I’m sorry mate, I’ve sold me birds! But don’t worry, me mates got one too, you can borrow that one!’. Keeping birds of prey seemed to be a bit of a thing on the estate. They looked happy and healthy though, so I asked no questions. I did make a portrait of Craig (above). I was never really that pleased with it, but it did prove to be one of the most popular when it was exhibited. 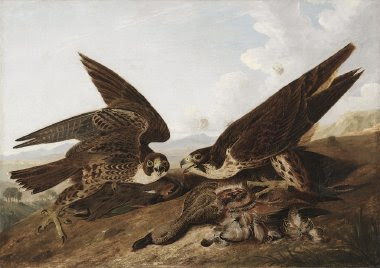 I love painting birds and animals, and would love somehow to take it further some day. I’ve just made the odd painting here and there. Here’s a great watercolour painting by John James Audubon (above), probably the most celebrated painters of birds, and an artist I really admire. It shows two peregrine falcons, one of the birds I found perched on my arm as I walked through the woodland today. A great painting to sign off on what has been a very memorable birthday.