I’m currently enjoying reading ‘Edgelands: Journey Into England’s True Wilderness’ a collection of writings by Michael Symonds Roberts and Paul Farley, two poets and writers based in the North West of England of Manchester and Liverpool.

The book’s publisher explains how the book ‘…explores a wilderness that is much closer than you think: a debatable zone, neither the city nor the countryside, but a place in-between - so familiar it is never seen for looking. Passed through, negotiated, unnamed, ignored, the edgelands have become the great wild places on our doorsteps, places so difficult to acknowledge they barely exist. "Edgelands" forms a critique of what we value as 'wild', and allows our allotments, railways, motorways, wasteland and water a presence in the world, and a strange beauty all of their own… Paul Farley and Michael Symmons Roberts – both well known poets… write about mobile masts and gravel pits, business parks and landfill sites in the same way the Romantic writers forged a way of looking at an overlooked - but now familiar - landscape of hills and lakes and rivers. England, the first country to industrialise, now offers the world's most mature post-industrial terrain, and is still in a state of flux: "Edgelands" takes the reader on a journey through its forgotten spaces so that we can marvel at this richly mysterious, cheek-by-jowl region in our midst.’ 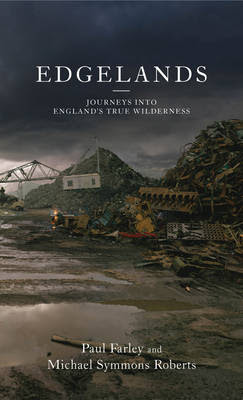 It is full of great descriptions and poetic prose that really bring the life and texture of these so-called forgotten and overlooked places: places that are only briefly glimpsed as we pass them on the motorway or train. They are places that I’m very familiar with myself, which is why I’m getting so much from the book, having spent a large part of my life passing through these places largely on foot, or bike when younger. I only learned to drive in my thirties, which is why I think some of these places seem so familiar, as I used to get around much more by walking or on the bus.
The charcoal drawing above is one I’ve been working on the last few nights with this books themes in mind, and also my desire to focus my landscape painting on these overlooked nowhere locations in an attempt to create something that is more rooted in the specifics of place. I’m going to develop a painting and maybe some prints from it. 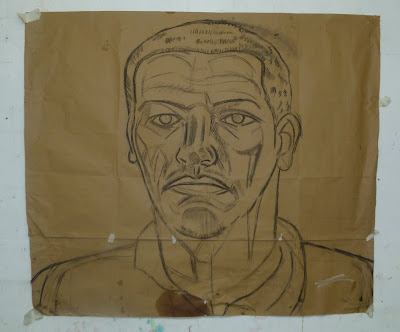 I’ve also been working on this portrait of ‘Anwar’, a student of mine that I’m going to attempt a large painting of in the next few days. He’s from Eritria, and like most of my students, a Muslim. In a way, I think it’s sort of related to the drawing. I think most of my favourite portraits depict people who are often on the margins of society, like the places in these landscapes and book, and who seem a bit awkward in their own skin, or don’t seem to ‘fit’ in. It’s how I’ve always felt about myself in some way, which I’m now beginning to see the connections between in my art. I’ve often tried to, but now as I find myself in my forties, I think you can’t really run away from who you are, but just try and create some distance from it sometimes.