I’ve had a painting ('Bernard' above) ‘selected’ for this year’s Worcester Open 2010. I say selected with ‘ ‘ as basically if you pay your money and send an image you will be in the show. It is however, in two parts; a properly selected show at the Worcester Museum and Art Gallery (the winners!) and everyone else in a ‘salon’ type show at The Pitt Studio, an artists-run project in the city (the losers!). I’m one of the losers at The Pitt Studio.
I’m being a bit naughty saying that I know, and I only write in jest. It is the philosophy of Nathan Pitt, director of the Pitt Studio for a more democratic approach to art exhibitions with a more encompassing idea of an Open Exhibition. I don’t share this philosophy though, as I think you have to be careful how you present your work. It might be fun, and exposure of the work should perhaps be something to be welcomed, but I don’t believe at any cost. I speak from experience. I once had a painting selected for the annual MidArt exhibition at Himley Hall. This show was selected by different artists/curators each year, and this year Andrew Logan, high camp artist extraordinaire, chose the work. He too had very democratic tastes, and I found myself in a terribly kitschy show with my own painting hung between a teenager’s painting of Dave Gahan of Depeche Mode fame, and a portrait of the Queen Mum! I shiver now at the memory of it all.
It’s funny looking back, but it did no favours to my own painting which looked dreadful in this context, and has made me wary of opportunities like these. But I’m going to send my painting along to the Worcester Open with a more open mind, as I think the Pitt Studio is a project that is trying to do something really good for artists in the region, and trust in their judgement.
I also got rejected from this year’s West Midlands Open 2010 at the Gas Hall, Birmingham. I was naturally disappointed but it’s just the way it goes. I’d been in the last two WM Opens so I can’t complain. I’ve since been in a couple of times to see the exhibition, and it seems a real mixed bag in terms of quality compared to other years. I couldn’t help feel cynical about the video piece that won first prize, as it was one of the few video works on display and seemed to belong more on Youtube than anywhere else. There were far more interesting and subtle pieces, including some really interesting drawings and prints. The painting was also disappointing, with none of my own favourite painters in the region like Barbara Walker, Graham Chorlton, and Rob Perry represented, whch was a surprise. At first I thought it was refreshing not to see these artists work, as it does feature heavily in many of the recent surveys of Birmingham-made art at the BMAG, but later I felt the quality of these painters' work was far stronger than many of the other selections in painting this year.
A piece that has remained in my memory was Elizabeth Lee’s knitted dog suit (below), whose work I’ve mentioned before. It was a really good combination of using materials with real wit and intelligence (in this case dog hair), with an underlying powerful message. 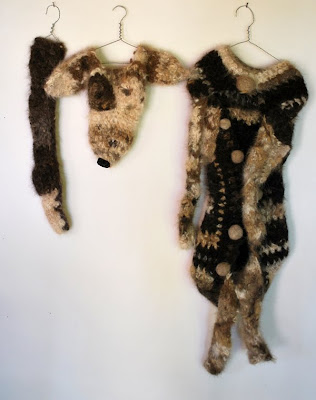 Dog Coat Coat (Disguise For A Dog on The Run), Elizabeth Lee
Finally, I’ve entered a painting for this year’s Liverpool John Moore’s Painting Prize Open Competition, the most prestigious and competitive painting prize in the country. Of all the competitions I’ve entered this year, this must be the one I’m least likely of getting a painting selected for, with thousands of painters entering. But, in the words of Jim Bowen, you’ve got to be in it to win it! I’ll keep you posted.
Posted by shaun morris at 21:09